Megan Raisch publishes her writing, writes poetry, excels in band, and much more 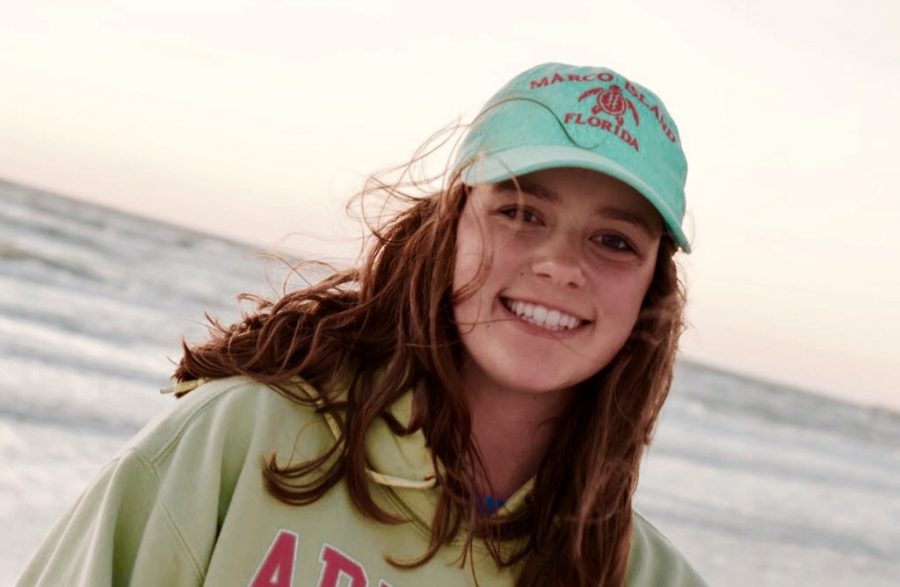 As a performing musician, team captain, and, most impressively, a soon-to-be-published writer, one might find it hard to believe that Megan Raisch is only a sophomore. With a unique passion for literature and a gift for exquisitely crafting poems and stories, Megan possesses talents that most her age do not share. Consistently backed by her supportive family in all areas that she explores, Megan finds herself constantly bettered by her endeavors in different fields.

When she was in fourth grade, a casual field trip to a music exhibition sparked a love for music in Megan that is still alight today. After being inspired by the piccolo and the flute, Megan hoped to involve the wind instruments in her future. Upon joining band in middle school, she remembered her fascination with the flute several years before and picked it up during her instrument trials. Since then, her devotion to band has only flourished.

“I mostly do it for the people,” Megan said. “Band is such a unique group of kids, and everyone is so diverse. I also really enjoy playing music. It’s so different, and everyone interprets it in a different way. I know Mr. Ash, our old director, would say, ‘When you perform for people, it can pull them out of their current life situation and bring them to a new place.’ If they’re having a really hard time in their life, [music] can- even temporarily- pull them out of that, but that alone is a gift.”

Apart from her musical interests, Megan’s knack for athletics brought her into the high-paced world of volleyball. Her appeal to the sport peaked last season when she was elected by her teammates to be the freshmen captain.

“Playing the sport itself is really fun,” Megan said. “I’m a setter, and I love that position, so I always had a really good time when I played. I’ve played sports since I was little. I think it’s because I’m really competitive, and I have to put that energy somewhere.”

Unfortunately, Megan found that during her most recent seasons, the environment began to clash with her personality. She decided that her sophomore year season would be her last and felt like it was time to quit. Additionally, because she is hoping to take a leadership role with the marching band next year, making time for band practice rather than volleyball practice became a priority.

Constantly supporting Megan in both her musical and athletic endeavors are her three sisters. Between Anna, in college; Sarah, a senior at FHC; and Emma, in seventh grade, Megan continually has a sister to go to for advice, help, or even just to chat.

“I feel like a lot of people think that when there’s a lot of girls in the house, there would be a lot of fighting,” Megan said. “But actually, we’re really close, and Sarah, Anna, and Emma are definitely my best friends. We love to hang out, and we don’t really fight that much. With Anna gone, it’s definitely different; the house is so much quieter when she’s away. So when she comes home, it’s super nice, and the house feels full again.”

“Both [of my parents] are huge role models for me,” Megan said, “especially my dad because he used to be a youth pastor, so he is really good at connecting with high school students. That’s been really helpful to me, and his wisdom has guided me to make the right decisions. And [as for] my mom, I really want to reach out and care for people because of her.”

Both Megan’s parents and her sisters have always encouraged her in her latest creative endeavor: writing. From a young age, Megan enjoyed concocting stories to share with her peers, and her recreation has blossomed into a full-blown passion. With a published book in the works, Megan is working hard at her writing for all to enjoy in the future.

“In middle school, I started writing a book that I’ve worked on a lot over the past three years,” Megan said. “I’m still not close to finishing it, but I’ve got a bunch of it done. This year, we had to write a short story [for Ken George’s English class]. When he read mine, he called me over and talked to me about it, and he said that he thought that more people should read my stuff. He basically told me his plan for getting me published, so I’ve been working on a book for the past two months.”

Separate from her enthusiasm from creative writing, Megan has recently embarked down the path of poetry. Though it involves a completely different form of writing, she finds the same enjoyment in creating stanzas rather than paragraphs.

“I read some poetry books and I thought, ‘This is weird, but I kind of like it,'” Megan said. “It was mostly free poetry, and I liked how they just rearrange their words so that it sounds really deep and meaningful, even if it’s really simple. So, I started just writing about the good and the hard things in my life, and eventually, I just found myself with a ton of poems.”

As she continues down the creative paths of writing, poetry, and music, Megan finds herself constantly surrounded by friends who share the same passions and family who will always be there for her. With her writing and poetry in specific, as she advances and becomes a published writer, it’s exciting to see where this exhilarating path will take her.

“I think it’s a really good way for me to just vent,” Megan said. “When I write poetry, it’s about what’s going on in my life. But when I’m doing creative writing, I just enjoy it so much. I really like other people to read and see what they think about it. I’m obsessed with books, so anything that has a story is really captivating to me, so that’s why I really like to write my own.”