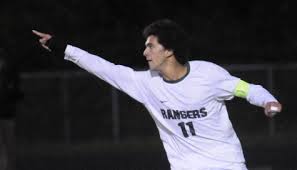 Senior soccer player Anthony Bowie has had a truly historic senior season, and the culmination of his incredible performances and dedicated effort has earned him one of the highest honors a high school soccer player can receive: a spot in the High School All-American Game.

Bowie and 39 other seniors from across the country will descend on Raleigh, North Carolina for a week in December to play in front of college coaches and a television audience. Bowie, who is one of 20 players on the “East” team, has 40 goals headed into the Rangers’ regional final game tonight. He is currently the frontrunner to win Michigan’s Mr. Soccer award, which would crown him as the best soccer player in the state.

Bowie is part of FHC’s 20-0-3 team, that is currently ranked #1 in the state and ranked nationally as well. Next year, Bowie will be playing college soccer at Western Michigan University along with his teammate Max Postlewait. Bowie joined The Central Trend for a quick question and answer session.

Q: How did you find out about making the All American team?

A: I was told a few months ago that I was on the watch list for the team, and the watch list has about 100 guys on it. They said that they would come out and watch me and see how I am doing, and then about a week ago they emailed me and told me that I made the team.

Q: What was your first reaction when you heard that you had been selected?

A: I was really excited, I knew that I was on the watch list and everything but to actually make the team was very cool for me.

Q: What do you think has enabled you to reach this point in your soccer career?

A: I have played a lot of club soccer and have worked through a lot of injuries and stuff like that. I think this year is when I really improved and it has been such a fun year. The success of the team definitely has a lot to do with it too, the guys have all been playing really well and I think that the attention that the team has gotten has really helped me out personally too.

Q: What do you think about tonight’s game and the game that you just won on Tuesday?

A: We played really well in the second half on Tuesday, which allowed us to build that 5-1 lead. Tonight’s game should be fast-paced and high scoring. We beat them 5-0 earlier in the season but I think the teams are pretty evenly matched, so it should be a pretty exciting game.