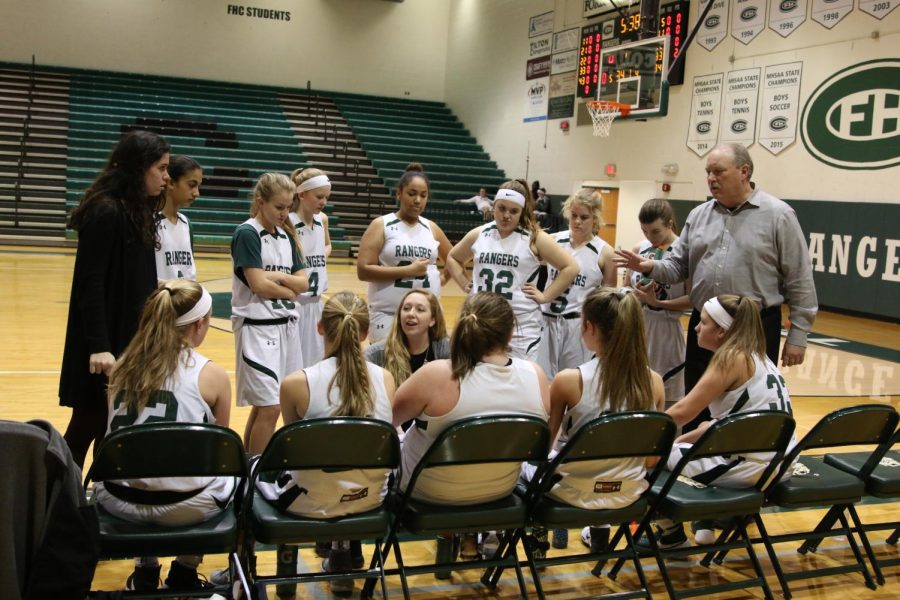 Tuesday night, girls freshman basketball faced off against the Wildcats of Northview to start the second round of conference play. The last time the two teams played the Rangers were defeated; they were once again beat last night, but this time by a much closer margin of 41-34.

Going into the game head coach Holly Wierenga told her players that as long as they could beat the Northview press, it would be a whole different game from last time and she was correct. The team beat the press easily early in the first quarter and Northview quickly fell out of the press.

Despite the good adjustment from the team, they still were down 0-7 until freshman Morghan Tilton completed a pass to freshman Audrey Sidebotham at the free throw line to put the Rangers’ first 2 points on the board. After this, Northview started to press once again, but Morghan broke free of it and headed down the floor. She then passed to Audrey, this time at the block, for another easy 2. The team was starting to play with energy and earned a steal which led to another 2 points for the team from freshman Maddy Knoor to put themselves down by only 1. The Rangers took the lead with 3 seconds left in the quarter with a half court pass to freshman Maggie Jenkins who knocked down the lay up.

“As soon as we make one basket or get a good look, the energy instantly changes,” said Wierenga when commenting on the team’s comeback. “It’s sometimes a struggle to get those first couple of shots going, but once we started to score they kept [the energy] up. The girls on the bench were actually vocal and loud and when they have energy, it brings energy to the floor and that was really important.”

The Rangers were in the bonus half way through the second quarter, sending freshman Ella Sloat and Morghan to the line to shoot a one-and-one multiple times, where they earned 1 and 3 points, respectively. Combined with a layup from Audrey for 2 points, the team was on a 14-0 run since its first points were scored. Northview ended the streak in the quarter and managed to tie the game. Maggie gave the lead back to the Rangers with a shot fake drive and a pull up jump shot. This gave the Rangers a 16-14 lead at the half, free throws being the key to this lead.

“When the free throws are going in, the girls feel better and they continue to go in,” said Wierenga. “When we are composed on the line it just really helps [the confidence]. Tonight, if we didn’t hit our free throws it would have been a really different story for sure.”

The game was close coming out of the half and remained a one possession game for awhile until freshman Lauren Bont knocked down a three pointer to put them up 21-17. However, Northview earned the lead back after being fouled many times and getting points off the free throws that followed. This put the Wildcats up 24-21 and forced Wierenga to take a timeout. Lauren earned the next 4 points from free throws and a jump shot to put them back up by the end of the third 25-24.

Northview came out strong in the last quarter and earned 4 points in the first minute and a half to take the lead. The Rangers continued to foul and put the Wildcats into the double bonus. This gave the team many chances to extend the lead from the line. They held the Rangers at 29 points, making Wierenga take a timeout once they were down 35-29. Ella, Lauren, and Chloe Teliczan then earned 2, 2, and 1 points respectively before the game ended with a Ranger loss, 41-34.