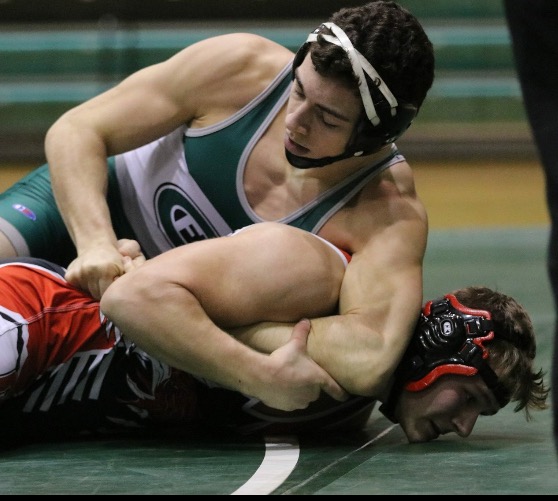 When it comes down to it, FHC wrestling just doesn’t have enough experience on the team. This downfall showed throughout the district match against Rockford on Wednesday. The experience in the line up is within the heavier weights and the inexperience lies within the lightweights. The heavyweights consist of seniors who have had the experience of being on the team for a longer period of time. FHC’s lightweights are mostly underclassman who just haven’t been on the team long enough, despite passion, a love for the sport, and bright futures.

FHC lost to Rockford high school with a score of 40-25. The match started off with Rockford’s two best wrestlers taking on Rangers. It was up to senior Reece Davis to not get pinned against his opponent in order to keep the match close. He wrestled with a lot of heart in the 160 weight class and kept the crowd watching all the way until the end of his match, despite being defeated. Head Coach Brad Anderson was extremely proud of Reece.

Senior Isaac Torrey gained the first win of the night for FHC. Isaac has been wrestling for 10 years now and has been on the varsity A team since his freshman year. He is filled with experience and put on quite a show. He took down his opponent eight or nine times, then finally pinned him late into the third period. He broke his opponent’s will and Coach Anderson believes Isaac did an amazing job.

Senior Keegan Moore had a similar experience to Isaac Wednesday night, making quick work of his opponent. After taking him down a handful of times, Keegan was able to pin his opponent. He left the match with a score of 13-0.

Senior Trace Schirmers had the most exciting match of the night for FHC. It was a battle back and forth for Trace and his opponent. His opponent was stalling, pulling on Trace’s fingers, and the match even got to the point of coaches having to separate the two. It was a heated match for Trace, and he won by just one point.

FHC’s older wrestlers were able to wrestle hard and performed very well on the mat. Freshman Caden Jacobs was also able to pull out a victory in the 103 weight class against a tough opponent from Rockford. He feels the seniors on the team have helped him develop as a wrestler immensely. Isaac and Keegan helped Caden with his warmups before big matches and reassured him to go out and wrestle to the best of his ability all season. Caden is sad to see the seniors leave because their experience helped fuel the younger wrestlers.

The team lost to Rockford predominantly because of the lack of experience. The young wrestlers just need more time competing on the mat. They have bright futures in wrestling and the FHC wrestling program will continue to improve in the upcoming years. The Rangers are now done wrestling as a team and a few select wrestlers will be moving on to individual districts on Saturday, Feb. 10 at Grand Haven high school. The wrestlers entering individuals are wrestling at their best right now, are in great shape, are wrestling with a lot of passion, and are ready to attack.