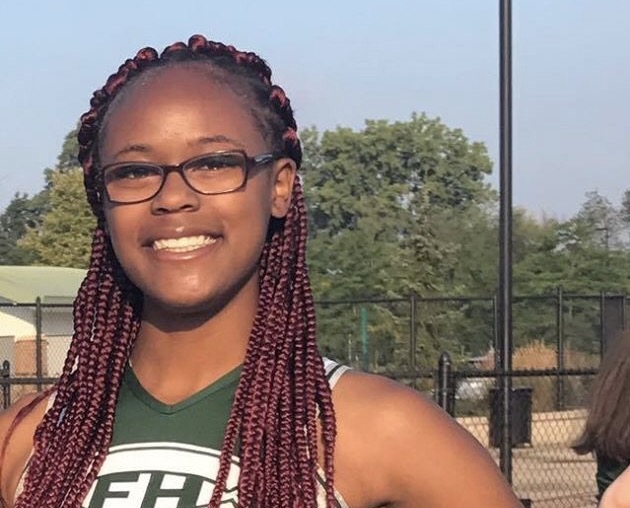 Four years may seem like a long time, but for most high schoolers, it flies by in the blink of an eye.

Even with the common goal of making the days count and forming lasting friendships, every last student will travel a different path along the way. For senior Dea��ja Weekley, this meant year-round athletics and an interest in nursing.

“I do sideline cheer in the fall, competitive cheer in the winter, and softball in the spring,” Dea��ja said. “I’m also a manager for the wrestling [team], and that’s in the winter too. I keep myself busy, but it’s all really fun, so I enjoy it.”

Dea��ja, who moved from Ridge Park Charter Academy to FHC in ninth grade, quickly found that high school is what you make of it. Though she wasn’t keen on the transition between schools at first, she decided to take matters into her own hands by stepping out of her comfort zone.

“It was a very different atmosphere here compared to [Ridge Park Charter Academy],” Dea��ja said. “I didn’t like it here at first; I didn’t like it at all. I wasn’t very social freshman year, but then I realized people here aren’t as bad as I thought.”

After branching out, Dea��ja enjoyed FHC a lot more. By opening her mind to the people around her, she was also opening herself up to the opportunities and activities the school had to offer.

“You just have to hang out with the right people,” Dea��ja said. “I’m closer to a lot more people now, and I’m closer with a lot of teachers too. Last year, the people in the office told me about a program at KCTC that they thought I’d like, so I tried it out.”

The program, called Early Childhood, turned out to be the perfect fit for Dea��ja. At the end of this year, she’ll have worked there for two years; the job includes working with children for the second half of every school day.

Dea��ja’s passion spreads to all aspects of her life, as she also can’t seem to get sick of cheerleading. After doing sideline cheer for three years, Dea��ja decided to pick up competitive cheer this year.

For Dea��ja, cheerleading had always been an interest. When she was little, she looked up to the cheerleaders she saw at college basketball games; it just made sense for her to follow her passions.

Sideline cheer, which takes place in the fall, has helped Dea��ja grow as an athlete as well as a person.

“I started sideline cheer in tenth grade, but I was on JV then,” Dea��ja said. “Then, junior year, [my friend] Remy and I made Varsity together. I think that was my favorite memory from sideline, actually. They called us up together at tryouts, and Remy and I had never been on Varsity, so we thought we were getting cut. It turned out that we weren’t getting cut, and we had actually made the team!”

On the sideline cheer team, Dea��ja usually had the position of a backspotter, which means she was the one who supported the girls who were lifted up. While the backspotter is not seen by the audience, they are often doing the most work.

“I get hurt backspotting a lot; I get bloody noses, broken glasses, busted lips, and stuff like that,” Dea��ja said. “Cheer is really underrated. People think, “Oh, it’s not hard.a�� Yes, it is! You get beat up constantly; [a girl at our last competition] broke her wrist, so it’s not easy.”

By joining competitive cheer this year, Dea��ja could see how the two seasons compared.

For starters, competitive cheering was geared more to the judges, while sideline cheer focused more on getting ready for football games every Friday night.

“You don’t get a break in competitive, but in sideline, you sometimes get to sit around and give each other massages,” Dea��ja said. “In competitive cheer, our coaches are always saying “Don’t stop! Go, go, go!a�� You’re either constantly flipping or constantly doing motions. It can get intense at first, but Coach Steensma is the most understanding person.”

When she’s not on the cheer mat, Dea��ja is watching and mopping the wrestling mats. As a team manager, Dea��ja is responsible for keeping track of the wrestlers’ weights and cleaning up the mats after each wrestling practice.

“It’s my first year doing team managing,” Dea��ja said. “One day, I just peeked my head into a wrestling practice, and I saw girls in there. I asked them what they were doing, and if I could help; next thing I knew, I was becoming a team manager too!”

Dea��ja has to manage not only the wrestling team but her own schedule as well. With an intense winter sport like competitive cheer, she often finds herself running from one practice to another.

“I make it out to every single wrestling practice, and I try to go to as many matches as I can,” Dea��ja said. “Obviously, I have to be at cheer competitions, so sometimes cheer takes priority. With wrestling, I almost feel like managers are a step closer to coaches, so we have to take on a lot of responsibility with dedicating our time.”

Dea��ja has evidently found her niche at FHC, and it’s all thanks to her split-second decision to take a risk during her freshman year. It was that spring that Dea��ja joined her first new sport: softball.

“One day, I just decided to try softball,” Dea��ja said. “I had literally never played softball a day in my life; I didn’t even know how to throw a ball. The team was really welcoming, though, and I’m so glad I joined.”

A talented sprinter, Dea��ja has become the softball team’s “designated runner,” which is a very important role to take on.

“I think my favorite part of running is the sliding at the end of a sprint,” Dea��ja said. “I’m a slider; I love to get dirty running in the mud and dirt.”

There is no doubt that Dea��ja has made the most of her time in high school. She found her calling for so many sports, and she’s made incredible friendships along the way.

Dea��ja hopes to become a Certified Nurse’s Assistant (CNA) in the future. She plans on attending Michigan Career Technological Institute in the fall, where she’ll do a specialized CNA program.

The dream of becoming a CNA has been with Dea��ja since a young age. She has always had an admiration for nurses and doctors; as a child, she would constantly be asking the nurses about their equipment.

No matter where life takes her, Dea��ja knows she can make every experience a positive one. She’s gained more from high school than she could have ever hoped for, and she’s confident that her future will offer even more opportunities for her to shine.