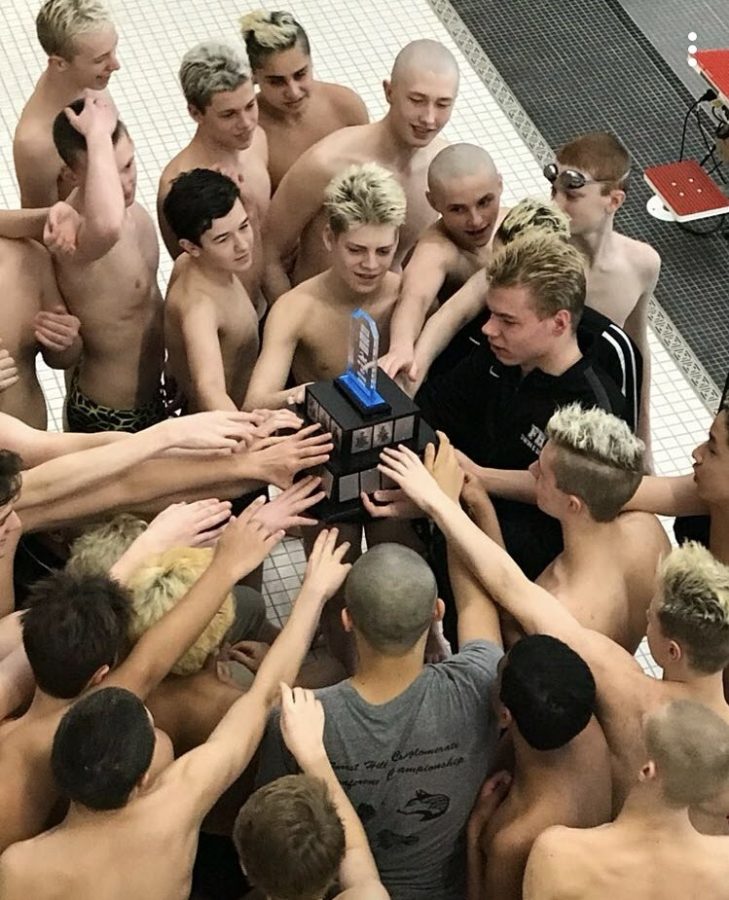 This weekend Boys swim and dive had a very fitting end to an undefeated season. Six other teams competed against FHC. Grand Rapids Christian placed seventh with a final score of 202 points. Sixth was Grand Rapids Catholic Central scoring 221 points in the end. Fifth place was Northview with 227 points, with Jenison just in front of them scoring 266 points. Finally, the third and second placed teams were Spring Lake High and East Grand Rapids. In the end, with a final score of 429 points, FHC came home as conference champions.

This conference meet took place over two days. Day one was a preliminary round but even after that first day, head coach Dennis Neat had full confidence in his team despite the tough competition.

“On day one we performed well,” Neat said. “We still had a great shot at winning the Conference title, but we knew it wouldn’t be easy heading into finals.”

Day two was the conference finals for the team. After all the work put in through the season, it all paid off in the end. Along with his coach, senior co-captain Matt Wilson also felt proud of his team and their victory.

“It felt really good,” Matt said. “I’m proud of the boys and how they performed. I’m also thankful we could pull off three seasons of being undefeated.”

A struggle faced during this meet was very little rest heading into Saturday after the long meet Friday. Despite another obstacle, the team overcame it.

“I think there were some good times,” Matt said. “Even without any rest going into the meet.”

Prep for a meet like this was done differently in practice, even with heightened nerves.

“I think the team was nervous but also prepared,” Matt said. “We knew it was going to be a tough meet and we swam like it.”

As a team, taking conferences is the highest award. So after the undefeated season the boys had, this was a proud victory.

“I’m incredibly proud of the team’s accomplishments,” Neat said. “This year and at this meet.”

For senior co-captain Paul Jeong, along with all the other seniors on the team, this was their last meet as part of an FHC team.

“It’s sad knowing I won’t be swimming in such a competitive way,” Paul said. “At the same time, it’s happy that this season and this win is how I can end my career.”

Boys swim and dive closes out the season as a team and in the best way possible. As conference champions. This is the final meet as a team for the boys. The next meet will be for those who qualified with state-cut times.

“I’m proud of the work that the boys put in,” Matt said. “I wouldn’t want my last season to be with any other group of guys.”