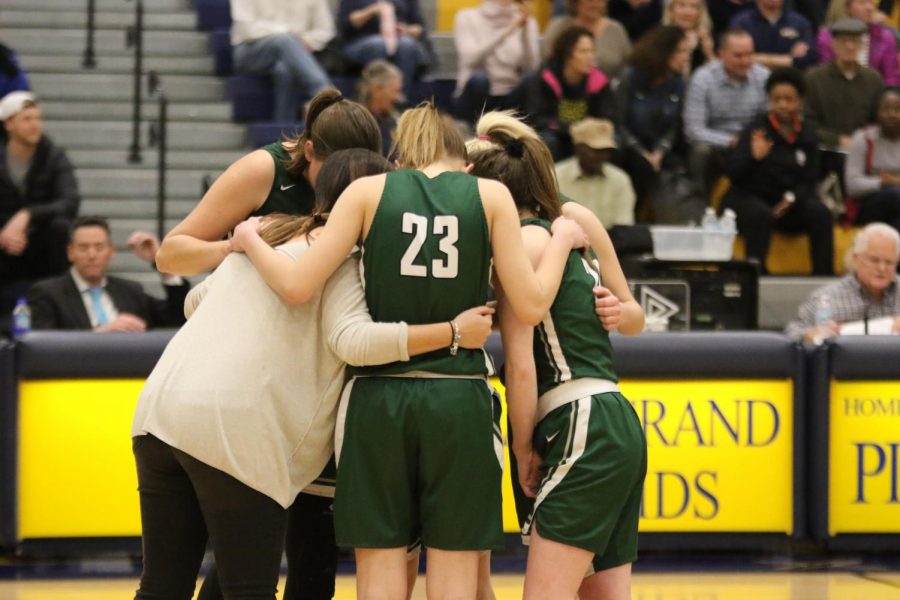 The Lady Rangers were able to overcome challenges throughout the season to finish with a winning 14-7 record. FHC was also 10-2 and earned second place in the OK White Conference, as well as going undefeated against Forest Hills teams.

“Injuries were a problem this year,” said Head Coach Kristina Prins, as six players were required to miss at least one game due to injuries. “We didn’t have a full-blown practice with the same group for the first two months so I feel like that was our biggest challenge.”

The girls varsity basketball team suffered three straight losses to start the season, as two senior starters were unable to play but bounced back to win against Forest Hills Eastern twice and Wayland in the Cornerstone Holiday Tournament to sit at 3-3 for the first few games of the year.

The Rangers then took a tough loss to Northview in the final seconds for the first conference matchup and then later by a large margin to Lowell to go 4-2 the first round through the conference. A highlight in these first six games was the buzzer-beating 1 point victory over Forest Hills Northern. During the second round of the conference, FHC went undefeated with a large victory over Northern and big upset over conference-leading Lowell.

From the very first tip of the season, the Rangers have played exceptional team defense, their teamwork and athleticism causing havoc for opposing teams. At about the midway point in the season, the offense caught up to the caliber of the defense to make FHC a force to be reckoned with.

With four out of five starters being seniors, this team had a lot of leadership and experience. Key players all year included seniors Breanna Probst, Madi Winter, and Emma Yoder in addition to three-year varsity player junior Claire Baguley.

“The last half the season no one could guard Emma, she just did so much,” Prins said. “All eyes were on Madi all year; she was our best scorer, she handled the ball, and she usually guarded one of the other team’s best players. Breanna always shut down the other team’s best player and maybe she didn’t show up on the stat sheet a lot but she honestly is someone we’re really going to miss next year. And then Claire, we get her back for another year but when she’s healthy and she’s rebounding she’s really good for us.”

The varsity basketball team will lose six seniors after this year, leaving four starting positions open for next year’s players.

“There will be four players coming back that have consistently played this year and we have an incoming freshman class that I’m really excited for,” said Prins looking ahead to next year.

In the end, the Lady Rangers were able to fight through injuries, third quarter slumps, and tough losses to post a successful record with many bright spots throughout the season.

“This season was so much fun,” Prins said. “We’re going to miss these seniors, no one is going to be able to replace them or do what they do. They’re an unbelievable group of girls on and off the court.”