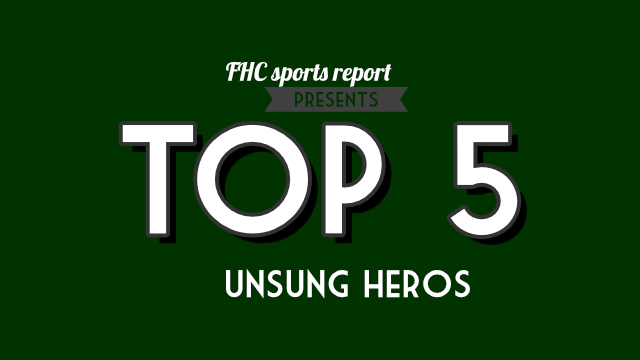 Unsung heroes of FHC are the athletes that leave the biggest impact on their sport that they’ve played behind the scenes. Whether it’s working hard in practice, using positivity to pick the team up, or adapting to a new obstacle thrown at them, these athletes have made a name for themselves and continue to do so.

The FHC wrestling team has many key athletes who score many points, but some of the team’s greatest strengths come from someone who is putting in work behind the scenes. This 2017-18 season, junior Vaughn Rodriguez broke his arm in the preseason and was unable to compete. Despite Vaughn’s injury, he stayed with the team through all of the ups and downs of the year. He was always at practice to keep his wrestling mind sharp and to support his teammates working hard. At tournaments, Vaughn was on the sidelines cheering on his friends.

The FHC girls varsity basketball team doesn’t just rely on its drive, skill, and passion to do well in the season; the Lady Rangers rely on the positivity that stands as the foundation for the team. Through all of the injuries this group suffered during the season, the team was able to stay positive with the help of senior Emily Obermeyer.

“I just think it’s good to be positive,” Emily said. “[Being positive] has always come naturally for me. In sports, I think that it is important to have that positive support for your team. I try making sure that when other people are down, I pick them up. It’s a better environment when you have people that are being positive because it’s a toxic domino effect when a team gets down mentally.”

In every sport, it is important to talk on and off of the court. Whether you’re in the game or not, players should be helping their team in any way that they can. For the FHC girls varsity basketball team, senior Sarah Obermeyer stepped into this role.

“I think that on the team I am definitely a vocal leader,” Sarah said. “I have always been told by my coaches that I never stop talking; it doesn’t matter if I’m on the bench or the court, I’m always talking. It’s so much easier to do well if people are acknowledging your hard work.”

As a first-year member of the FHC football team, junior Kyle Wojcinski gave all that he could offer in order to help the team succeed this year. Kyle, along with the rest of the team, cherishes the bond that they have as brothers and teammates. This special connection allows them to rely on each other on and off the field.

“My motivation behind playing sports is to play for each and every one of my teammates and not myself,” Kyle said. “I do this because players are always willing to do more for people who depend on them than they would do for themselves. To boost team morale, I always stay positive when we are in a tight game and always give my all so we can work together and hopefully win the game.”

As the boys varsity basketball team wraps up another successful season, it is revealed how each member of the team contributes to the winning record. Senior Matis Butlevics has been on the team since his junior year and has continuously proven to have a positive attitude and be a reliable teammate.

“My teammates are really the driving force for the energy and positivity I bring,” Matis said. “The guys motivate me every day and reciprocate the same energy I bring. It brings me joy seeing the smiles on their faces and that’s why I do it. I really try to make everybody around me better with the energy I bring and my will to compete.”