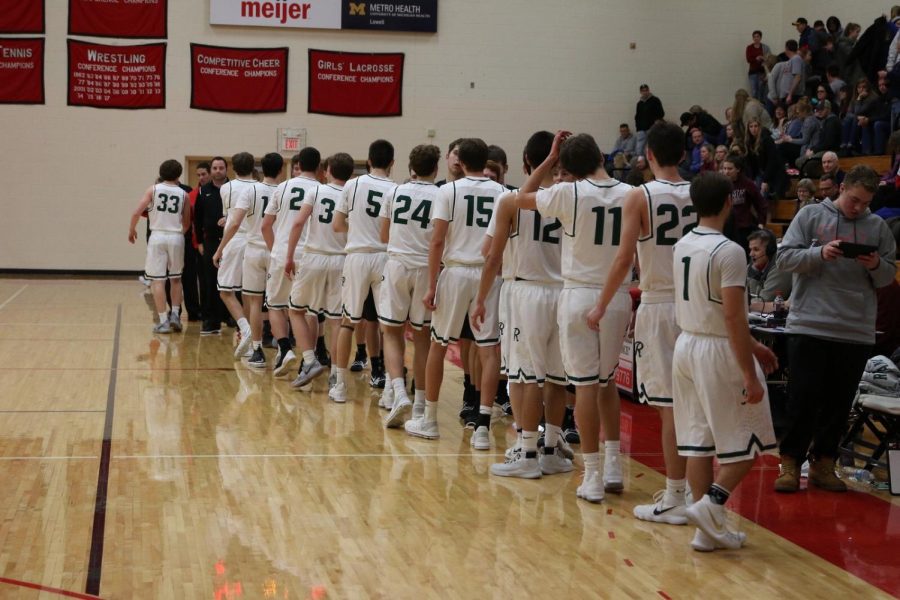 Boys varsity basketball suffered a season-ending loss to the East Grand Rapids Pioneers Monday night 65-57. After an incredible 2017-18 season and an OK white conference title, the Rangers efforts were not enough to take down a quick Pioneer attack.

FHC fell to a major deficit early in the first quarter, as the offense struggled to get going. Seniors Ty George and Andrew Tebeau both hit early shots to keep FHC within range, but EGR stayed persistent with their offensive game plan and put up 23 points in the first quarter.

As the Rangers came out in the second quarter, Ty and senior Ryan Dunn gave FHC an early spark to start chopping the lead down. Junior Daniel Deindorfer had a huge bucket under the basket and a steal that led to two points from Andrew. The momentum shifted in the jungle completely and FHC pulled within three.

Sophomore Jimmy Scholler was then sent to the line for a pair of shots and he knocked both down. The next trip down the floor for FHC resulted in sophomore Mitch Wilkinson hitting a huge three to give the Rangers the lead for the first time all night. After outscoring the Pioneers 24-9 in the second quarter, FHC went into the locker room up 36-32 at the half.

The start of the second half looked similar to the first quarter as FHC’s offense slowed back down. Jimmy had 4 of the 9 points in the third quarter for the Rangers.

For the entire fourth quarter, it seemed that FHC was racing against the clock. Mitch and Ryan both continued to score, Mitch from beyond the arc and Ryan from the free throw line. As EGR pulled further away, the hopes began to dwindle in the jungle.

The seniors lived up to their expectations as they finished their final game in their home arena. Ty, Andrew, and Ryan combined for 34 points and 17 rebounds, along with 8 assists.

The underclassmen continued to make the future look bright. Mitch hit big three after big three in clutch situations. Jimmy made his usual impact on both sides of the floor, locking down their most effective player and scoring 10 points of their own.

FHC finished the year with an astounding 18-3 final record.