A look back at FHC hockey’s incredible comeback season 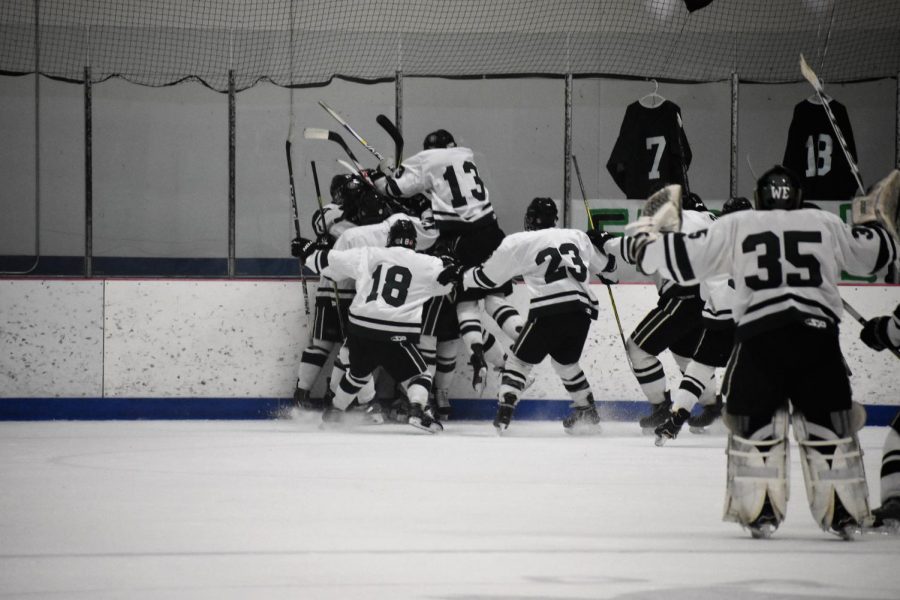 After starting off the season 0-7, the Ranger hockey team knew that there needed to be a change made in order to turn this season around. It ended up that they needed just one win to get some momentum and confidence. That win came at home in their eighth game of the season against Reeths-Puffer, where FHC beat the Rockets 4-3. Since that win, the Rangers went 11-6-1 to cap off an amazing comeback season. Even though FHC didn’t have the ending they wanted with a district loss to EGR in overtime, the Rangers still had an outstanding season considering where they started.

“I think that we had a pretty good season,” said junior goalie Carl Mielock. “We knew we were coming in with a very young team and might struggle early. There were ups and downs, but we worked our tails off every day. No one ever gave up and that’s good to see in such a young team.”

The season started out with what was expected to be three exciting matches against Grand Rapids Christian, East Grand Rapids, and FHNE. The Rangers lost by 4 or more goals in each of the three games, and people were starting to think that this wasn’t FHC’s year. Two more losses at a Midland showcase would be followed by two more losses to St. Francis de Sales and St. Ignatius Prep – two outstanding teams from Ohio. This brought the Rangers to a demoralizing 0-7 start. Having averaged only 1 goal per each of those games, things needed to change not only offensively but with the team as a whole.

“It was a rough start to the season,” said senior captain Jacob Demeter. “We started out 0-7, but after we lost to Grandville the first time 7-4, something clicked for us. Our season really turned around and we were successful, which is huge and amazing to be a part of. “

The win against Reeths-Puffer at home was just what the Rangers needed heading into showdowns with Catholic Central, Grandville, and rematches with rivals FHNE and EGR. Two huge overtime wins were picked up after the initial victory, one being against reigning district champion Catholic Central and the other being in an important non-conference matchup against Lowell-Caledonia. After those wins, FHC completely flipped their season around starting in Muskegon where they beat conference opponent Mona Shores on the road.

“Everyone just started buying in,” senior captain Charlie Brewer said. “We practiced more intensely and everyone’s attitudes were more focused on winning than they had been earlier in the season.”

The Rangers would go on to win six more games after the win against Mona, including an enormous win in overtime against the #2 ranked Grandville Bulldogs on senior night, the game-winner coming from Charlie Brewer. This huge win would set up a big first round of districts against EGR. The Rangers started out hot in the first-round district rivalry game, but the Pioneers had a lot of momentum after the first period and took the game to overtime. 44 seconds into the extra period, EGR scored and just like that the Rangers’ season was over. FHC would finish with a solid 12-13-1 record.

It was very impressive watching the Ranger hockey team grow over the season. From being a young team in the beginning, this team started to play like a very experienced group towards the middle and end of the season. FHC has a great shot next year to go far in playoffs, as they return almost their entire roster for next season.

Jacob Demeter gives some advice for the returners next season.

“I would just say enjoy every second and don’t take anything for granted,” Jacob said. “It goes by quick and I never thought that I would see my last game in a Ranger jersey, but it was there in the blink of an eye. So just enjoy and live every moment.”