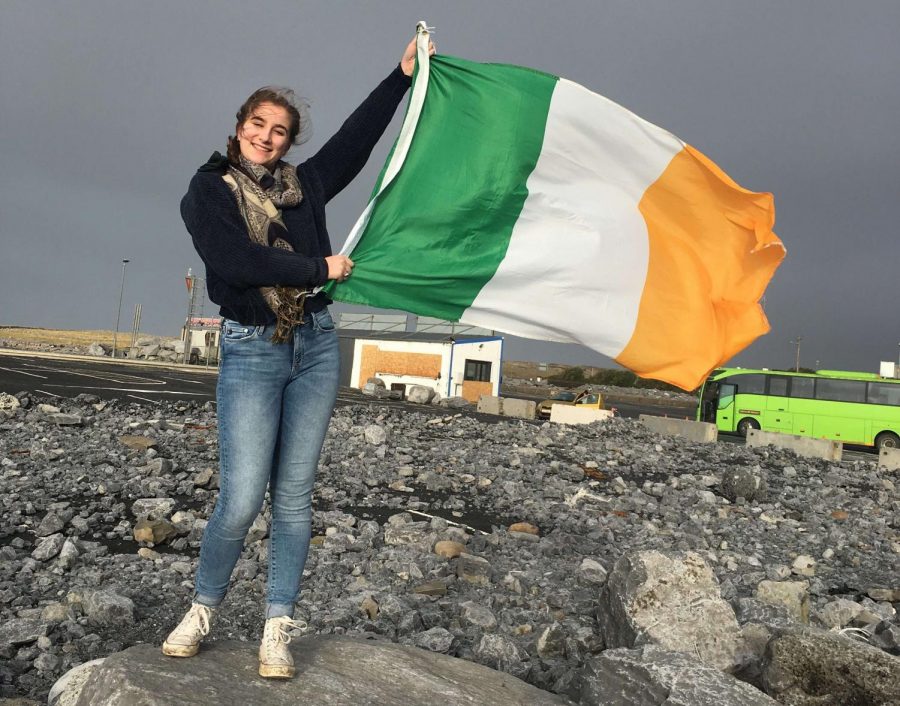 She goes alone for 3,520 miles with a travel time of over 7 hours. Just like that, she leaves for months without hesitating. Surrounded by water, air, land, and sky, but not a single familiar face in sight. Simply, perfectly alone, while trying to discover her true self. Senior Julia Cunningham took on an entire semester abroad in Ireland recently. There, she was part of an exchange student program where she stayed with a host family and attended school.

Julia had always considered being an exchange student. Since before her junior year, there had always been a thought in the back of her head encouraging her to try it.

“I love traveling,” Julia said. “I love new adventures, and I wanted to embrace myself in a new culture and find out how their everyday life is. I just thought it would be interesting to do.”

After doing research one day about taking part in an exchange program, Julia had her mind set on Ireland. Ireland was her pick for many reasons. For starters, she had never been to Ireland before. On top of that, she is of Irish descent, and Ireland is close to her mother’s homeland of the United Kingdom.

After deciding on Ireland, Julia approached her parents and sought permission to partake in the program she had found. After a compromise, her parents agreed to let her stay for one semester in Ireland. She then made contact with a coordinator based in Drogheda who set up her stay with her host family and her schooling enrollment.

Julia was thrown into an all-girls Catholic high school. This was a big challenge to Julia because she saw many of the rules as strict and unnecessary.

“I tried to get out of it,” Julia said. “I didn’t want to go to a Roman Catholic school, and I didn’t like the thought of all girls.”

However, this difficult schooling was eye-opening for Julia. She embraced the hardship and continued to learn both inside and outside of the classroom.

“If I had the option to go back and do it again, I’d definitely do it,” Julia said. “All the people I met in my school were so, so nice, and it was amazing to see how they lived there every day of their lives for years.”

This schooling experience allowed her to embrace what she has here in the United States, as she gained a new appreciation for the life students have here.

“You don’t realize what you have until it’s gone,” Julia said. “You have to appreciate every single thing that you have because you never really realize how great it actually is.”

Her day-to-day routine was jam-packed with activities. Julia made many friends in Ireland. First, she would wake up on her own and get ready for school. She would then take the bus early in the morning to school since she could not legally drive in Ireland. When she returned from school, she would go to the beach with friends and then shop, get food, or do some homework.

While she was out and about, she was taking sole responsibility for all her plans and actions. She was also responsible for keeping her host family aware of her whereabouts.

Julia was placed with a host family consisting of two parents, two children, and one dog. A comfort about staying in Ireland was the lack of a language gap. Abbie Shevlin, the 14-year-old daughter in the host family, credits the use of the same language for helping them connect faster.

“Well, I had students before so I was used to students in my house but I’ve never had an American student so I think we clicked quicker because we had no language barrier,” Abbie said.

Even though there may have been some bumps in the road with the relationship between Julia and her host family, it was all worthwhile. Both the host family and Julia walked away from the exchange with a positive feeling.

“I could tell Julia was a very nice person from our first meeting,” Abbie said. “Our family was going through rough times, but Julia was always happy and smiling.”

On top of bonding with her host family, Julia was constantly bonding with fellow students from school. She befriended Irish girls as well as other exchange students. Julia was friends with another American girl who lived right down the street from her and was also taking part in an exchange. The connection the two shared helped them get through difficult times together.

“There was another American girl, who also was also in the exchange, who lived in the neighborhood over,” Julia said. “She really helped a lot. We could relate to the same things. If we were ever struggling, we just talked to each other. So mostly it was her that helped me. Also, all the friends I made in school were really supportive and welcoming.”

The Irish friends Julia made at school helped her also adjust to her new lifestyle. One Irish friend, Emma, helped Julia through her exchange by enjoying the simple things in life with her.

“I have so many amazing memories that I was lucky enough to share with Julia,” Emma said. “We spent most of our lunchtimes together in our classroom where we would get the chance to chat and laugh and share music; it was just so nice… I hoped to make her final day in school a day she wouldn’t forget. We walked [for] like 20 minutes so we could buy a ton of snacks so we could throw her some sort of goodbye party.”

After she left, Julia had to readjust to her life in the United States. She went back to school the day after her flight came home. However, Julia feels like her academics didn’t miss a beat. While it was difficult to catch up on some classes like Sign Language, Julia was able to continue her schooling at FHC without any issue.

Julia’s prolonged visit to Ireland still currently affects her daily routine. While she was there, she learned lessons she wouldn’t have discovered otherwise. Emma credits this trip to helping her discover her true nature.

“I feel like the whole experience of the exchange helped her develop as a person,” Emma said. “She undertook the major challenge of living with a family she didn’t really know, going to a new school with a different set of rules and ways of teaching, and meeting new people and different surroundings in general. She really put herself out there, and I feel that all of these things helped Julia grow as a person. All of these things are not the easiest, especially leaving her friends and family for that period of time; she became a much more independent person.”

On top of strengthening important characteristics, Julia’s exchange helped her plan for the future. Julia currently has an internship set up in Germany working the social media aspect of a bedding company. She leaves July 30 and will remain there for a year. Once she completes her internship, she will decide if she wants to pursue a higher education in Germany or the United States. After her semester away from family, this next endeavor will be easier for her.

But her plans for the future are just that. Plans for the future. Julia wants to take in the rest her senior year has to offer before moving on to the next step of her life. She believes that she got the best of both worlds this year: she was able to spend one semester abroad and one semester at home with her friends. Some sacrifices were made- such as missing football games, dances, and senior retreat- but Julia believes that it was all worthwhile, and she has no regrets.

“I always knew that my senior year was going to be great,” Julia said. “I was always excited for it, but I never thought that it would be this great. I [did] the whole first semester in a completely different country. And now coming home, my classes are easy, and I’m having fun, and it’s not difficult. It’s just a nice, laid-back year with some new challenges.”

All in all, if Julia had the chance to do it again, she would. She learned about herself and a new culture and was able to embrace independence constantly. There were sacrifices, hardship, and even at times fear, but nothing could have lessened her experience overseas.

“It was an adventure and a challenge definitely worth doing,” Julia said.