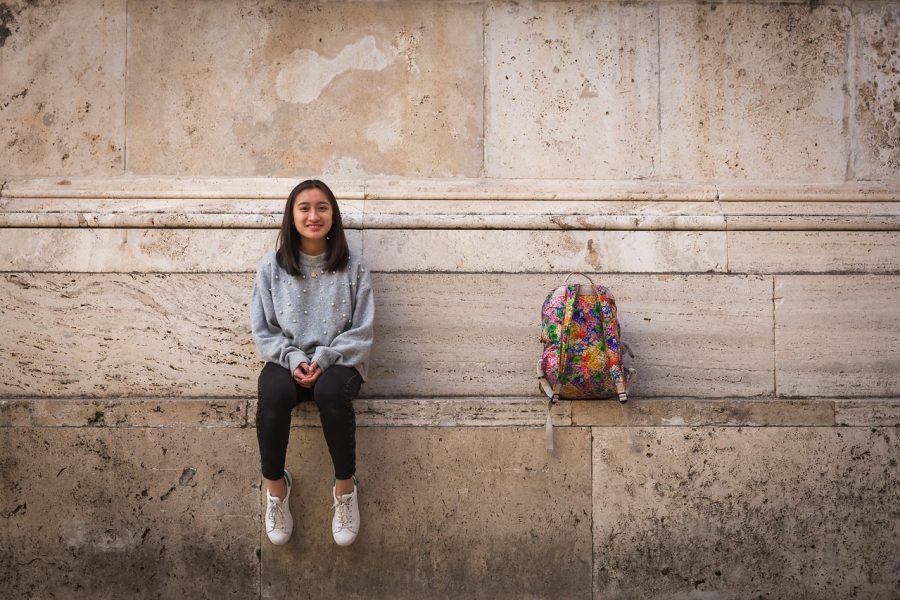 Mask on, foil in hand. This is where freshman Annika Santos feels most comfortable, driving herself physically and mentally to beat out whoever she may face, continually pushing herself in the strenuously technical sport of fencing.

“I tried out this camp, and I just ended up getting into it because you’re like, “Woah. What? This is a sword– what am I doing? This is cool,’ ” Annika said. “And then I just did it for a long time.”

Her first experience with this new endeavor was in Rome, and though it was foreign territory, Annika still found success.

“My coach was like, ‘I don’t expect anything; I just want you to try hard. If you get like last place, it’s okay,’ ” Annika said. “But I actually wasn’t cut after the first round of eliminations, and I was able to beat like Austria and France or someone. So I beat like 55 fencers in that tournament. [It was] so cool.”

Annika fenced on behalf of her family’s country, the Philippines. As of now, the Philippines and Rome have been her sole experiences with international fencing. But, Annika already has plans to compete in more Asian countries– and she is ready to prove herself.

“In terms of ‘international’ I’m like a beginner [of the advanced],” Annika said. “Most people on my level are juniors and seniors, so they’re going to be gone soon, and I have time. So I’m going to catch up.”

“I’ve always liked fencing,” Annika said. “I like the point that I can be like hitting people with a blade and using my wrist, and it’s all about technique. You just feel like you’re doing something really special.”

But Annika’s commitments do not end at international fencing. As a freshman entering the high school, Annika threw herself into the extracurricular scene with no hesitation.

“I think wanting to try a lot of things and talking to people just makes you more intelligent, like all around, in all areas,” Annika said.

Indeed, this philosophy of striving to try new things and meet new people led Annika to join Model United Nations, Science Olympiad, HOSA, as well as becoming president of the Class of 2021 and maintaining her involvement with fencing and playing the piano.

While her first semester at the high school was certainly stressful, Annika credits her experience with competing in fencing as allowing her to adapt to the rigor of her schedule.

“[Competing] is super stressful,” Annika said. “I know that’s no one favorite part, but the stress has really helped me deal with [other sources of] stress, like with school and stuff. I’m able to handle the pressure.”

Despite her loaded schedule, Annika has thoroughly enjoyed all her new ventures and the learning experiences they had to offer. Model UN, for example, encouraged her to keep up with current events.

“It really got me looking into the news because it’s required,” Annika said. “But then after a while, it became a habit. Model UN isn’t even happening right now, but I’m still always on top of the news now.”

“The conferences are the most fun part because it’s like this big field trip, and you meet so many new people,” Annika said. “I love meeting new people.”

Prompted by her older sister’s involvement, Annika decided to join Science Olympiad after having been a part of it in middle school. This too proved to be another activity that exposed Annika to a world of new faces. And while fencing limited Annika’s participation in the competitions, the two competitions she was able to attend made a lasting impression.

“In a way, [Science Olympiad]’s like Model UN where you’re just stuck with this group of people,” Annika said. “In school, no one is really forced to talk to you. When you’re all stuck together, whether you like each other or not, you end up becoming friends; it’s just the way it is. Bus rides were so much fun. We played games and sang; bus rides were the time to either cram study or play [games like] Mafia. We’re all a family– it’s a Science Olympiad family, really.”

Furthermore, the academic aspect of Science Olympiad pushed Annika educationally, allowing her to explore a variety of new topics.

“After you keep on doing [the tasks and events]– it’s a pattern,” Annika said. “You start getting stuff in your head. Like I know about microbes now, and I never took a class [on it].”

To further pursue various science subjects, Annika also decided to try out FHC’s brand new medical club, HOSA. Annika attended the HOSA Leadership Conference and competed in the trivia game event, “HOSA Bowl.” This was FHC’s first year attending the conference, so Annika and her teammates went in with minimal background information; nonetheless, they did their best and managed to advance onto the upcoming state competition.

“I think [because] it’s a new club, no one has that much pressure on them because [we have] no one to compare to,” Annika said. “We have nothing to prove, so why don’t we just throw ourselves in here and try it? And then it ends up going well. So I feel like for states, the same thing’s going to happen.”

Indeed, Annika has a tendency to jump into various new activities. For instance, upon suggestion from a friend, Annika decided to run for class president.

And while it was certainly a feat to juggle the position on top of all her clubs and sports, she somehow managed all the commitments.

“I mean freshman year is probably the most stressful year, I’m sure, for each president because you don’t know what’s happening, and then there’s a lot to get done,” Annika said. “And then you have to be shamed in front of the whole school because you probably did the worst. Yeah, it was stressful– at times it was really fun. But I think this year was particularly hard.”

But on reflection, Annika recognizes the tribulations as a learning experience. After having survived the peak of student council season- as Homecoming and Winterfest have now come and gone- she knows now what needs to be done differently next year.

Now, as freshman year begins its decline, Annika feels as though she has made the most of her first year in high school. She has continued to strive for excellence in fencing and has delved deep into the vibrant world of FHC extracurriculars. With her eyes set on the future, she hopes to continue her path of exploring new skills and subjects.

“When you try something, then you can know if you like it or not, and I’m really trying to get stuff off my list [of things to try] because there’s a lot,” Annika said. “So I need to hone in on one thing and focus on it and then do my best to get to that goal.”