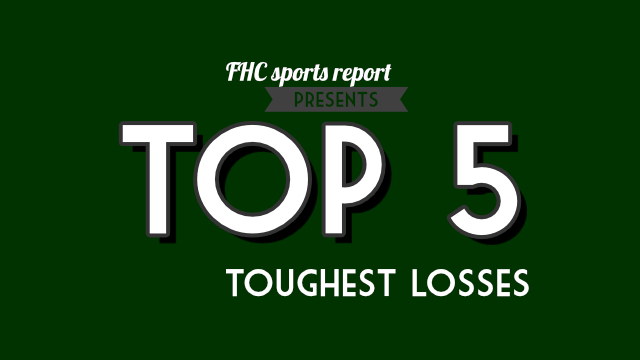 Jess Schellenboom in the 100-yard Breaststroke

Junior Jess Schellenboom has experienced one of the closest losses here at FHC. At this year’s State Meet, Jess swam in the 100-Yard Breaststroke. She fell to her opponent from East Grand Rapids by three-hundredths of a second. Jess received second place at the State Meet and although Jess was disappointed in herself, she was able to immediately look towards the future.

“I’ll remember that loss,” Jess said. “I will work harder to get those three hundredths of a second back and hopefully win next year.”

Varsity football in the State Semifinal to Livonia Franklin

The 2017 Ranger football season will forever be remembered by the FHC community. The team not only inspired our school, community, and themselves but the future Ranger football teams to come. The football program has not been as successful as this team was since 1999. Not only did the Rangers have an undefeated regular season, but they went all the way to the State Semifinal game. The team fell 20-0 to the Patriots of Livonia Franklin. This loss brought disappointment to the football players, coaches, cheerleaders, parents, and fans. FHC finished its season 12-1, making the community incredibly proud.

The 16-4-1 varsity soccer team was senior-led this year. The Rangers were a tight-knit group and grew up playing with each other. The team had an amazing season that was cut short in the district final against East Kentwood (EK). FHC had previously beat EK in the first game of the year 1-0. In the district final game, East Kentwood scored early in the game and the Rangers had to battle through injuries and yellow cards in the second half to come back. The Rangers fought adversity and ended up tying the game up with around ten minutes remaining. EK scored on a penalty kick with three minutes left on the clock. FHC then had one final chance to tie the game, but the free kick went wide. This was a devastating end to the season, especially for this senior group.

Varsity hockey started the season 0-7, but FHC had a phenomenal turn around. The team was able to get its first win of the season by beating Reeths Puffer 4-3. After the Rangers’ first win, they were unstoppable and made it to the first round of Districts to face East Grand Rapids. In the first period, FHC came out strong and scored 3 goals. EGR came out hard in the second period and tied the score 3-3. Senior Charlie Brewer kept the Rangers in the lead by scoring another goal in the second, but the Pioneers quickly responded to tie it up. In the third period, both teams put up a strong defense and allowed no goals to send the game into overtime. The Pioneers found an open shot at the net to beat the Rangers 5-4; a disappointing end to an amazing turn-around season.

The boys varsity basketball team fell short of its high playoff expectations, falling to East Grand Rapids 65-57 in the first round of districts. The Rangers, who finished 18-2 in the regular season and 12-0 in conference play, were caught on an off night by the 12-8 Pioneers. Earlier in the year, these two teams met in a non-conference matchup that ending in a 9-point Ranger victory. The Pioneers got off to a hot start in the district matchup and went on a 6-0 run to start the game. They expanded their lead to 12-3 right off the bat. The Rangers were cold and the Pioneers couldn’t miss from beyond the arc early on. The Pioneers led by 11 at the end of the first and held the lead for the beginning of the second. Mid-way through the second quarter, the Rangers strung together a few good plays and cut into the lead. After an Andrew Tebeau layup and a Mitchell Wilkinson corner three, the Rangers went into the half up 4. The game of runs continued in the second half, as the Pioneers stormed back to take the lead mid-way through the third. The Pioneers held the lead until the Rangers cut it to 1 point. Every time the Rangers made a run, EGR had an answer. The Pioneers held strong and made free throws down the stretch to clinch the win and end FHC’s season.

“It’s tough to go down knowing we had a chance to make a run in the playoffs,” senior Tyler George said. “East is a tough team with a starting lineup full of college players. We caught them on one of their best nights and we didn’t perform how we expected.”