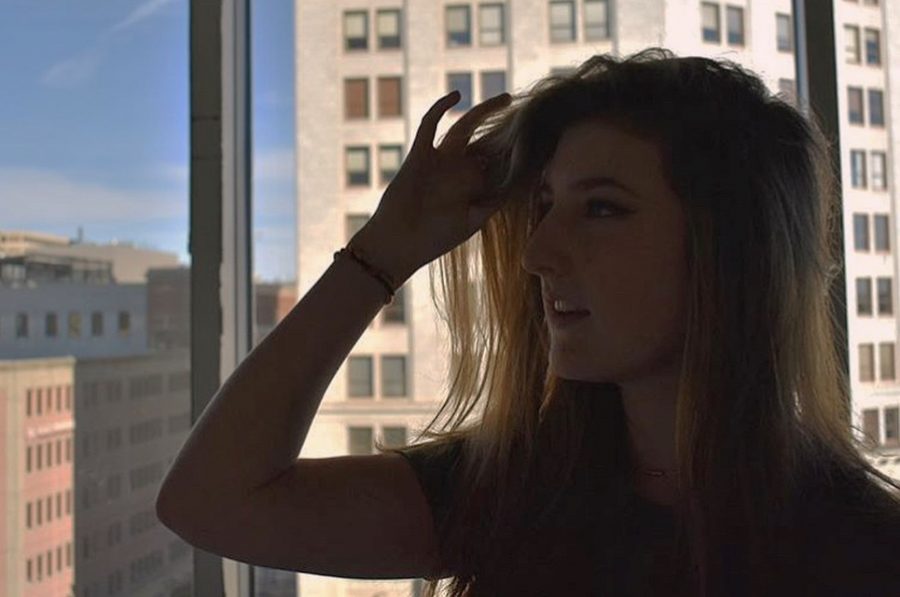 For eight years, senior Molly Growney has been intensely focused on her music career, something not a lot of high schoolers can say. From starting guitar in third grade to picking up the bass a year ago, Molly has been creatively driven for most of her life.

Upon starting guitar per her father’s request, Molly quickly realized that music was more than just a hobby. It was a passion. Playing guitar led her to jazz band, where she quickly learned bass and got immersed in a completely different style of music.

“I was thrown into [jazz band] pretty much not knowing anything– I haven’t read sheet music in six years,” Molly said. “I had no idea what I was doing when I went in there, so it was really intimidating. Now that I’ve kind of been in the environment and been doing it for a while, I feel more comfortable in that class.”

In addition to being a part of the jazz band at school, Molly is also in her own band entitled Beyond Paradise. The idea of being in a band has always enthralled Molly, and being with Beyond Paradise for a year now has been a thrilling experience for her. Molly’s guitarist approached her and asked if she’d like to join his band, and since then it has shaped itself into a rock/alternative cover band.

“We’ve mostly been doing covers; it’s kind of rock/alternative rock,” Molly said. “Right now, we’re in the process of writing our own music, and we want to have a little four [or] five-song EP come out, just for fun. We’ve gone through a few of our own songs that we have written, and it’s been fun so far.”

The future plans for Beyond Paradise stop after high school, though, because Molly plans on either forming or joining a new band in college.

“This band is just a fun little high school band; it’s not going to go any farther than high school,” Molly said. “We’ll always kind of be a band, but after high school, it’s probably not going to go any farther. Music is really my goal; [it’s] what I want to be doing. I have to have a band in college. I’m so desperate. I think I’ll kind of just look around [campus] and get to know any of the music students [and] ask them if they need anyone to play with.”

Molly has always found music to be her escape in the hectic days of high school. She likes pouring her emotions into songwriting instead of bombarding other people with her problems. Molly uses songwriting as a different outlet and a unique way for other people to connect with her.

“I like being creative and putting my emotions out in a way people can understand,” Molly said. “I’m not super great at songwriting, but I like to do it. It’s a good outlet when you don’t want to be ranting to someone; you can rant to yourself through song.”

Molly has always been passionate about music, but she understands that it can’t be a career that always offers a steady income. Film is a hobby that she discovered a short time ago in Media Communications, a class she took on a whim for the VPAA credits. Since then, Molly’s fondness for film and editing has only flourished, and she plans on going to MSU to continue exploring that passion.

During junior year, Molly earned a spot on the FX team where she films and edits the videos shown every morning and afternoon. Along with doing the technical work behind the scenes, Molly also has a spot in front of the camera where the pressure is immense.

“The pressure in [FX] is kind of fun,” Molly said. “[There’s] pressure to do really well, and you have to be on top of it. You’re always working, and you’re always turning in stories. You don’t really stop; there [are] no breaks.”

Molly prefers being behind the scenes because of her perfectionist personality. Editing allows her to be in control and fall in love with another aspect of the arts.

“I just like really technical stuff,” Molly said. “You can get whatever shot you want through editing; it’s very perfection based. I think it’s just another way of art that I haven’t gone through or done before. It’s so hard to put a finger on why I fell in love with it.”

Molly also enjoys the sense of control through her roles as the goalie and team captain on the varsity field hockey team. Before starting field hockey, Molly was a goalie for her lacrosse team and in seventh grade, she carried the same position over to field hockey.

Being on the field hockey team has mostly given Molly a special group of friends that are more like a family to her. The closeness of the team paid off because they earned state and division championships. Molly doesn’t feel any sense of regret by not running around on the field with her teammates; she can easily control the game by determining where the ball will go.

“Being goalie is a huge part of the team,” Molly said. “When the ball comes down to the defensive part of the field I am controlling where that ball is going and where my teammates are going. In a sense I am a field player. I’m not across the field, but I’m back in my goal directing things and making sure everything is in order. You’re just in so much control, and it’s kind of a big deal.”

Molly has noticed the unique aspects field hockey has and appreciates every experience from it.

“Field hockey is way different than other sports,” Molly said. “It’s such a community; everyone is best friends. Field hockey is a family. I’ve met a lot of new friends– people who I still talk to. It’s been a fantastic experience, way beyond any other sport I think.”

Molly’s different passions and interests shaped her into an emotional, creative person that has a fresh appreciation for the arts. Throughout everything Molly has been involved in, she has known from very early on what she wants to do in the future.

“I think [my passions] have definitely made me into someone who knows what they want,” Molly said. “Being involved with music very early on, I knew that was what I wanted to do. They’ve made me definitely focus on art and appreciate art more. [Without art] I wouldn’t be as creative as I am; I wouldn’t have an outlet. I think I would be a lot more academically driven [without the arts]. I would be very different.”

As Molly looks towards the future, she hopes to have a successful career and stay true to herself.

“I’m excited for the future; I’m so done with high school,” Molly said. “I want to be out and be living my life. I hope to just have a good future, have a good life, and focus on positive things more.”

Molly is approaching the next decade of her life with an open mind and a pocket full of life lessons from four years of high school.

“I was never a high school person; I belong in college and in the adult world,” Molly said. “My takeaway from high school is that it’s so important to be yourself and express yourself the way you want to. Don’t let social pressures change you or make you someone you don’t want to be. By senior year that really pays off. I dress how I want to, and I’m not influenced by other people. I think finding yourself and being the person you want to be is a huge takeaway from high school; I will definitely carry that on through the rest of my life.”