10 members of DECA team qualify for nationals in Atlanta 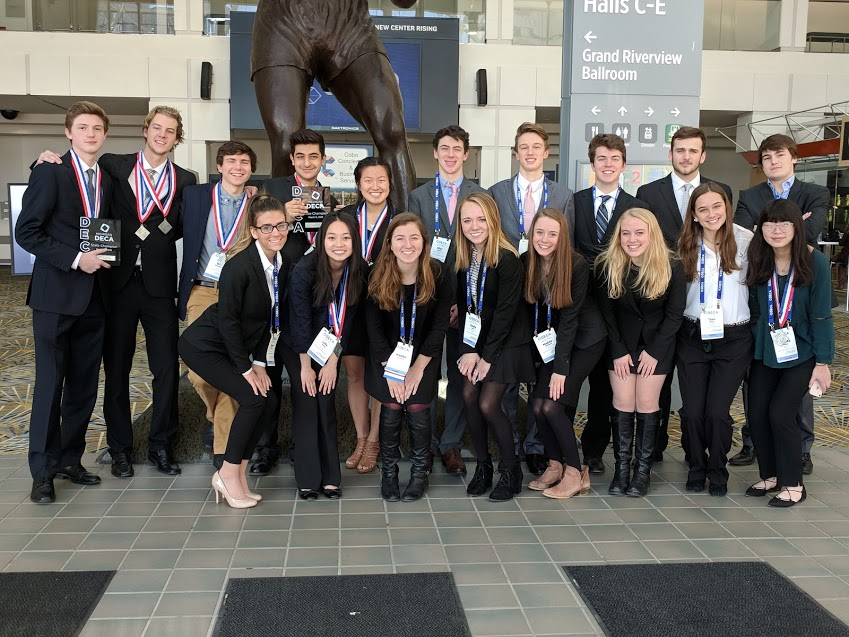 On the road to Detroit, marketing teacher Kristin Oai??i??Brien and her dozens of DECA students excitedly traveled to take part in the DECA state competition. Surrounded by nearly four thousand students that were equally dedicated to business studies, FHC’s true passion for the subject shone through when student after student was called up to the stage to advance to the next round.

Considering that only 35 students went to the competition, Oai??i??Brien and her team performed extremely well, with ten students qualifying to compete at nationals in Georgia in a few months. Compared with last year, where only two people advanced to nationals, this signified that FHC is showing great improvement.

“I was very surprised,” Oai??i??Brien said. “[For] some of the kids, I thought would do well; I just didn’t know that they’d get on stage for a medal or if they’d actually qualify for nationals. [For] the kids that did well last year, I was hoping they would get the opportunity again. There were some other ones that I had a suspicion that they would do well. I was very happy, very surprised with the results.”

Students could choose two routes to compete in DECA: projects or roleplays. Roleplay candidates had to first compete at districts to advance and were given a short amount of time to prepare and present an idea, involving spontaneous thinking and creativity.

On the other hand, project students bypassed districts and went straight to states. These projects spanned from five to thirty pages long and involved meeting up with a local company and professionally discussing and analyzing market plans.

“For the group overall, [the challenge is time],” Oai??i??Brien said. “Especially with the projects, I had some people involved in a lot of other activities but were still trying to find time to get the project done. I think we have some people who have done DECA before, but we have another big group of kids who are just coming in, and it’s new for them.”

Yet, despite the challenges associated with DECA events, vast benefits are abundant as well. Involving a group of students that are seriously interested in doing business in the future, DECA provides exposure as well as a resume builder. Additionally, the countless skills gained through participation are skills that many students are not able to learn in a normal setting.

“Getting in front of a judge and having to present really improves your communication skills, your presentation skills, and your confidence,” O’Brien said. “[For] the groups that did the project, they have to present it to the judge and present the highlights. [They] actually saw how the more effort you put into it, the more you’ll get out of it.”

One example of Oai??i??Brien’s philosophy is senior Will Kuiper. Joining DECA in his sophomore year, Will improved greatly each season and has come out a stronger student more suited to the business world.

“The first year, [Will] didn’t make it past districts,” Oai??i??Brien said. “Last year, he made it to states and did okay. And this year, he’s actually qualified for nationals. I’m really happy when I get to see kids who really put the dedication in, and even though they might not have done well last year, they’re that much more excited and focused on doing well the next year.”

Though Will is graduating and heading down his business path, his DECA experience and the skills he has learned from it will remain with him to aid him in the future. The three years of participation have rendered him more capable for his future.

“The greatest benefit of DECA for me was its ability to help me grow as an individual,” Will said. “I am much better with public speaking now and other aspects of business. I joined honestly because many of my friends were, and I had no idea what to expect. However, I am so glad that I joined.”

Senior Ben Finklestein, Will’s peer, is another senior who will be advancing to nationals in Georgia. His innovation project gained him a high score, even though he was not expecting the results at all.

“Irene [Yi], Arshon [Sadaati], and I put our project together on the bus ride to States,” Ben said. “We presented later that day. Irene was a last minute add-in, but she greatly improved our performance. We ran through our presentation for the first time on the day of the judging, and it was a little rough. The judge didn’t look too impressed with our performance, so we were very surprised to have been selected to advance to Nationals. I guess I would be most proud of how well we came together as a team to improvise, adapt, and overcome.”

Though Ben’s experience was quite different from Will’s because of themes of focus and different events, he benefited from the same skills and is now also more prepared for his future.

“Although I’m more of a math or science geared student, DECA lets me expand my portfolio by exposing me to the world of business,” Ben said. “A background in human relations and business management is very valuable when it comes to getting a job or internship in the future. If you want to move up ranks in your job, you have to have a strong sense of how business is conducted. This is something normal high school students don’t get to learn, but it is essential to future success.”

Overall, DECA has been a great experience for those involved, and in its 21st year, the club plans to continue helping those interested in business for years to come.

“[DECA is about] building confidence, being able to take your ideas and confidently communicate them to a judge, applying what you’ve learned in a classroom setting, and showing the judge how much you know and how in tune you are with [the world],” Oai??i??Brien said.

For now, the DECA team has nationals to prepare for and look forward to. If their upcoming results are anything like their previous ones, FHC could hold our very own DECA national champions.

“Nationals will be a blast,” Ben said. “DECA is always a good time, and it will be even better this year with 10 people going from our school. Hanging out with them and exploring Atlanta will be a memory that lives within me for a lifetime.”