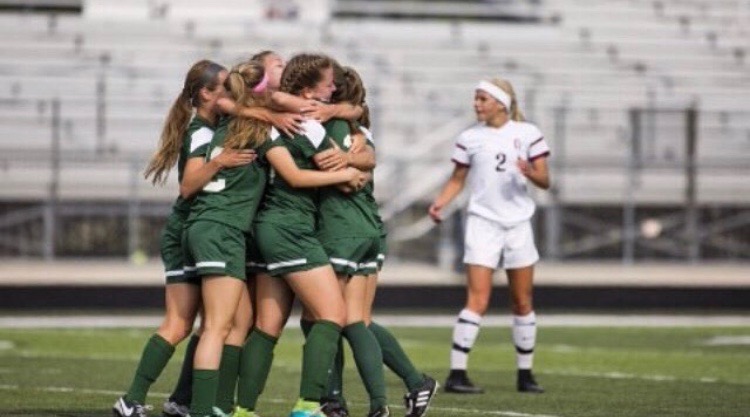 The varsity girls soccer team is looking for another amazing season to follow the last. In their previous season the Rangers were state champions, but after losing a few key seniors and several girls to club teams, the players on this year’s roster have a lot of shoes to fill.

“I think that this year we have a really great group of girls,” senior captain Emma Yoder said. “We have several girls who did not return this year, but we picked up a lot of skill from some of the younger girls that we pulled up.”

The Rangers also had a major coaching change when nine year head coach Jeremy Stacey retired from soccer, leaving the team to Ashley Ludtke who previously coached the junior varsity team for FHC.

“I am really excited to have Ashley as a coach for my senior season,” senior Ali Czarnecki said. “I had her when I was on JV and her way of coaching is great; she really pushes us to work harder and I am really looking forward to this season with her.”

The team has a loaded conference with powerhouses such as Lowell and Forest Hills Northern who will be two of the Rangers’ toughest opponents.

“I definitely think that Lowell and FHN will be intense games this season,” Emma said. “I think that the historic rivalry between us and those two schools will be what makes those games so intense alongside of the fact that they are both notoriously good teams.”

The girls are coming off of an undefeated season and look to defend both their conference championship and, hopefully, their state championship.

“I think that we will at least win conferences this year,” Ali Czarnecki said. “I feel like the pressure is off of our shoulders a little since we just won states last year, but we are of course hoping for a back-to-back state championship victory.”

The key to this season will definitely be getting the team to play as one, since there are so many new faces on the team. Team chemistry will be a factor in the team’s performances on the field and for securing victories. For sophomore Ali Fransisco, she is really looking forward to her first season on the varsity team and just like all of her other teammates, she is hoping for a successful season.

“I feel like our whole team works so well together because there isn’t really a superstar who outshines everyone else,” Ali Francisco said. “The overall team effort and hard work is there and the determination throughout the team is great.”

Despite all the changes in the team roster and coaching staff, the Rangers are really looking forward to their season. These changes will hopefully bring out the best in the team and help them come off with another undefeated season.

“I am just really excited to see what the season will bring us and I know that everyday we will go into practices and games and work our hardest,” Emma said. “Hopefully our hard work will pay off and help us end with the same result as last year.”