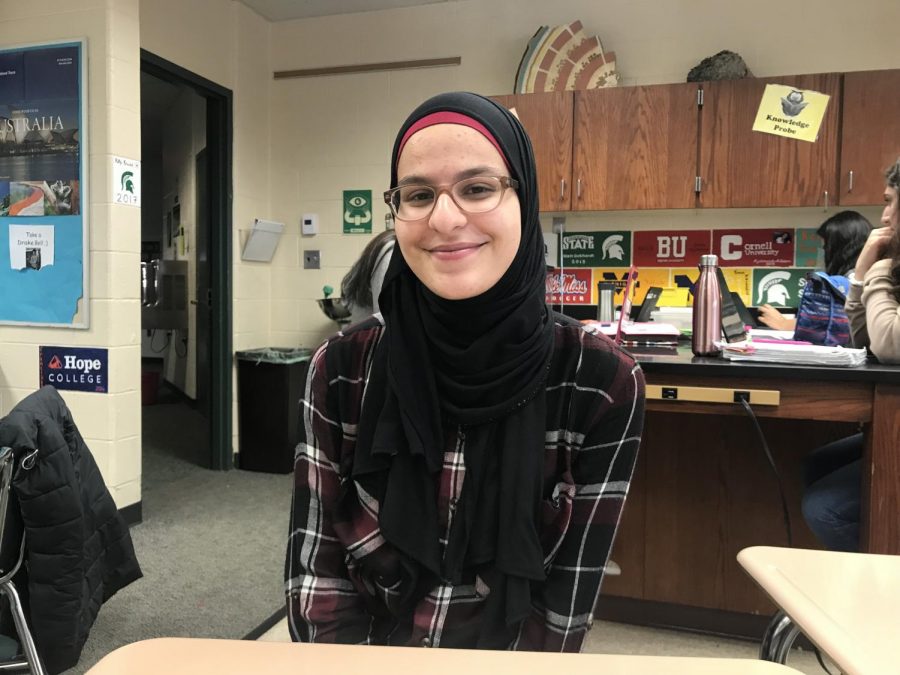 “When I lived in Palestine in fifth, sixth, and seventh grade, there was a lot less violence. It wasn’t bad at all. Sometimes, there would be tear gas bombs, but it never got worse than that. The tear gas was still pretty scary though, and everyone would tear up; it was probably really bad for our eyes. Going to school there was very different because it was an all-girls school. I liked it though because everyone was really close with one another; we were all girls. Also, students stayed in the same classroom and teachers would be the ones to move from classroom to classroom, depending on the hour. We had uniforms, too. Sometimes I miss the uniforms because now I have to wake up early to pick out my clothes for the day. Here, you have to think about what you’re wearing and what other people will think. To be honest, I kind of liked having uniforms better.

When I first moved back to American in eighth grade, I actually switched schools four times that year before we settled in Forest Hills. Before we went to Palestine, I went to a school called Sherwood Park Elementary; that was first through fourth grade. When we came back, we originally went back to Sherwood, but the school was really messed up then. The principal ended up having to teach us. It was really weird, so my parents decided to move us. We moved to Ridge Park Charter over on East Paris, and I stayed there for a little bit. Then, for some reason, my parents decided to move us back to Sherwood; I guess it was because of how close Sherwood was to our house. I stayed there for a few weeks, but it got really bad, so we kept alternating back between the two different schools. It was weird and awkward, and I had friends at both schools that I would see for a few days before I switched to the other school. I would leave them, and then I would come backai??i??. And then I would leave them again.

So after that period, my dad decided to bring us to Forest Hills Public Schools. He told us that this school district was really good and that Central was the best of the three schools. We started looking for a house here, and we ended up renting an apartment close to the school. After a while, my dad ended up buying a home right in front of the school; now, we walk to and from school from our house every day. It’s really nice. Forest Hills Central is really cool; when I first came here, I was so surprised that everyone cared about their grades. It was the only school where everyone just wanted to learn. All the other schools I went to didn’t have that.”