Alex Garland’s Annihilation is an impressive movie of biology, secrets, and aliens 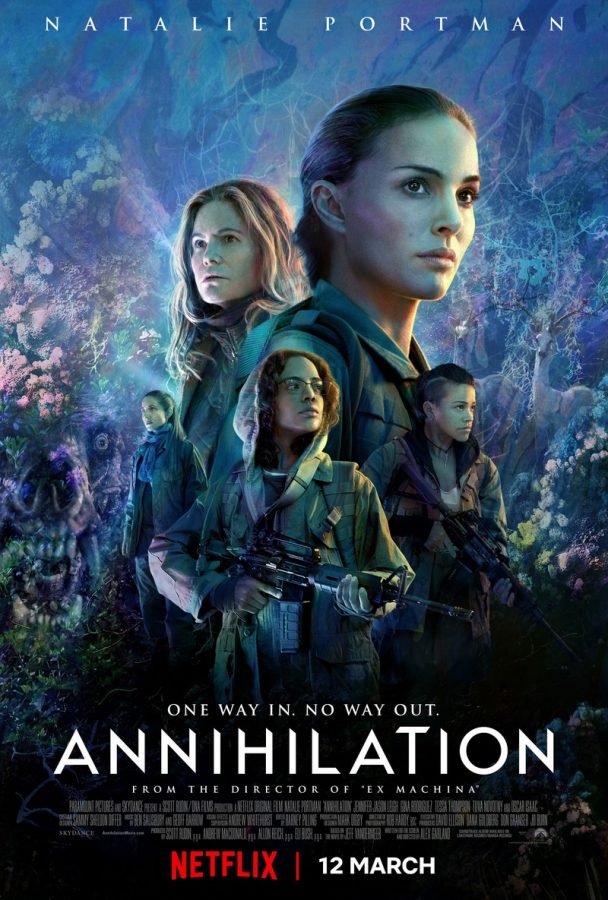 As a self-proclaimed nerd, I’ve seen my fair share of science fiction movies. However, only a select few make a deep, lasting impression on my mind, Annihilation being one of the few.

Directed by Alex Garland, Annihilation explores the sweet spot where true biology and imagination meet. It is about a patch of wildlife called The Shimmer; at the start of the movie, a meteor hits a lighthouse and creates a shimmering “bubble.”

The Shimmer gradually expands, covering more and more of the forest and swamp. Any life that is touched by The Shimmer displays many strange qualities, which calls for teams of investigators to go in. However, none of them have come out aliveai??i?? except for a Special Forces soldier named Kane.

The film stars Natalie Portman, who plays the protagonist of the film, a cellular biology professor named Lena. Her husband, Kane, had been sent into The Shimmer; no one heard anything about him or his unit for twelve months.

Initially, Lena seems to be the perfect wife, turning down her coworker’s offer of a backyard barbeque so that she can repaint the bedroom and pine for Kane.

As she’s painting, Kane–who had not been seen for a year–suddenly appears in her doorway. While Lena is all tears, smiles, and questions, Kane remains emotionless and unfazed. This chilling silence from Kane sets the mood for the next scene, where he starts to cough up blood and convulse out of nowhere.

One thing leads to another: the police intercept Kane and Lena’s ambulance, Lena is taken into questioning, and intelligence of The Shimmer is revealed to her.

She is finally told about Kane’s mission into The Shimmer, which she was previously oblivious to; in the face of Kane’s Shimmer sickness, Lena decides to go in herself.

Ultimately, Lena is sent on a seemingly suicidal mission into The Shimmer with four other women. Each one is incredibly smart, with professions ranging from physicist to psychologist. Little does Lena know, each one also holds her own emotional distress.

To volunteer for a Shimmer mission, one almost always doesn’t want to come out alive; no one goes into The Shimmer who is content with their life as it is. Out of the five women, Lena is the only one who has a reason to come back. The other four bear the weight of alcoholism, self-harm, cancer, and a daughter lost to leukemia; they went in knowing they would not come back out.

At some point, the movie shows that Lena was not the faithful wife we perceived her to be; in actuality, she had been having an affair with the very coworker who invited her to the barbeque party. This emotional weight was what made her feel obligated to follow Kane’s memory into The Shimmer; she hoped to gain an understanding of what happened to her husband in there so that she could save him when she came out.

The Shimmer is revealed to act as a prism, refracting not only the light but everything else that comes in contact with it. DNA was refracted so that trees grew in the shape of humans; bears took the screaming voices of their last prey as their own roars.

Each organism is in a constant state of mutation: an alligator developed rows of shark teeth, what seemed like different species of flowers actually grew from the same plant, and Lena’s blood mutated every time its cells went through mitosis.

By being in The Shimmer, each of the women felt the mutation happening within themselves.

The closer the group got to the lighthouse where the meteor hit, the stranger the mutations were. It messed with their minds, and those who were still alive started doing peculiar things. One woman, who lived through two of her teammates’ gruesome deaths, decided to merge her existence with that of a Shimmer tree. With that, she left Lena to join the landscape of The Shimmer.

Lena eventually reaches the lighthouse, but what she finds there is something that she could never have fathomed.

The ending of the movie is ambiguous in meaning, and it made me think. I looked up all sorts of analysis articles; I watched videos of Alex Garland explaining what the ending meant. A weighty topic is introduced halfway through the movie: humans are not suicidal, they are self-destructive.

Everyone has his or her own habits that ruin what would be a content life; for Lena, that was her affair. The other women had more obvious self-destructive habits like drinking or self-harming, but Lena had tried to keep hers a secret.

Alex Garland discussed this as the central theme to Annihilation. We, as humans, are constantly changing our lives with both good and bad habits. Similarly, The Shimmer is causing everything to mutate into plants as beautiful as the rainbow flowers or into monstrosities as horrid as the shark-toothed alligator.

Often, movies about “aliens” are showy and flashy; Annihilation, on the other hand, uses both beautiful imagery and subtle cues to prod at the audience’s mind. It portrays real scientific theories in action and explores what the extreme version of a natural process could be like. The film had everything one could want in a movie: emotion, human vulnerability, and creativity.