Reena Mathews' ai???Popping the Bubbleai??? is a series in which she covers some of the biggest news of the past two weeks. This weekai??i??s installment marks the fifteenth chapter of this biweekly series. 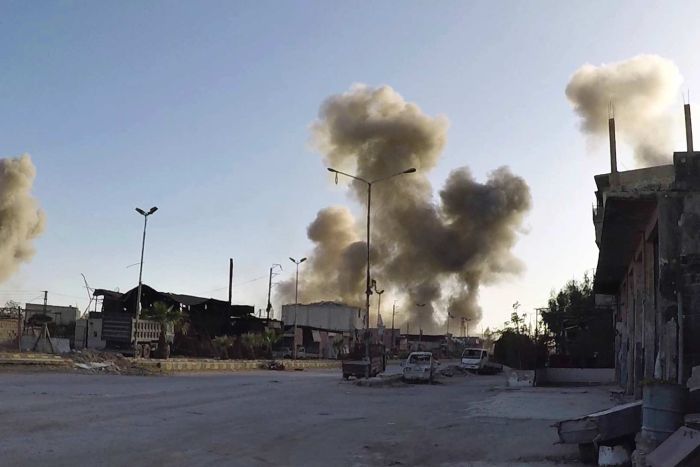 Smoke in the aftermath of the airstrike on Douma, Syria.

Teachers protesting in Kentucky and Oklahoma

Teachers have been making their voices heard loud and clear across the nation lately.

Now in Kentucky, teachers are standing up to changes made to their pensions. Lawmakers passed a bill about sewage, which included pension reform for teachers. This bill has been passed but not yet signed by the governor, despite him tweeting support for the bill.

This new change is set to cut benefits for new teachers while retaining them for most workers. This caused an uproar from many Kentucky teachers.

In the interest of protest, teachers all across the state called in sick two Fridays ago, and all public schools in the district were closed on the next Monday (though 75% of these schools were already on spring break, the rest of the schools closed, permitting teachers to attend a rally).

On that same Monday, as many teachers protested at a rally, the Kentucky House and Senate passed a bill that mandated a 6.2% cut to almost everything, excluding education, as well as increased taxes, allowing for a larger education budget. The governor has not yet signed this bill either; he has voiced great disagreement with this bill.

On the other hand, in Oklahoma, 200 of the state’s 584 school districts found themselves rattled by teacher walkouts two Mondays ago. In total, around 30,000 educators participated in the protest, facilitating the cancellation of about 500,000 kids’ schools.

For many educators, this protest was followed by a bus trip to the capitol for a more direct protest within the capitol building

These teachers’ demands include increases to pay and funding, similar to Kentucky. Reportedly, Oklahoma’s average teacher salary ranks 49th in the nation. As for funding, some districts have been forced to implement four-day school weeks as a result of a lack of funding.

As such, the Oklahoma teacher union was requesting a $10,000 raise over three years for teachers, $5,000 raise for support staff, and $200 million in state education funding.

This prompted the state legislature to vote and pass a pay raise of $6,000 or 16% (depending on experience) for teachers, a $1,250 raise for support staff, and $50 million allocated for education funding. The Oklahoma governor passed several new taxes to allow for this change.

While this was Oklahoma’s first new revenue bill to become law in 28 years, some teachers remain adamant in their demands, now asking for an additional $75 million in funding, as a compromise, and standing strong on their pay raise demands.

In response, the governor maintained her stance about not having enough money in the budget to meet these demands. Teachers then criticized this claim, as a $5 per night hotel/motel that was just repealed could have provided another $45 million. With that, over a 100 teachers and supporters are prepared to march 110 miles from Tulsa to Oklahoma City on Wednesday over six days.

Syria’s ongoing turmoil has just developed into even greater destruction and loss.

This past Saturday, the Syrian government reportedly waged attacks on the city of Duma, a rebel holdout city controlled by the Army of Islam. The attack consisted of bombs dropping from helicopters and chemical weapons, inciting an influx of even more devastating pictures and videos from the country.

This attack was said to be the culmination of weeks of assaults by the Syrian government and its Russian allies on this region of Syria.

Death and injury rates remain unsure. The Ghouta Media Center reported 75 deaths on their Twitter; the Union of Medical Care and Relief Organizations reported 70 deaths. On the other hand, the Syrian American Medical Society and Syrian Civil Defense reported at least 42 deaths and 500 injuries. Their reports noted a chlorine smell from victims.

In the aftermath, the Syrian media denies this attack while the White House has denounced the attack, with an emphasis on Russia’s participation. Like clockwork, Trump took to Twitter, condemning the attack, Putin, Assad, and Obama.

On Monday morning during a press conference, Trump promised to meet with the military and decide on a course of action.

But in another turn of events, Israel reportedly carried out air strikes against a Syrian government air base early Monday morning. This was initially thought to be a U.S. attack, but later confirmation affirmed that this was an Israeli attack. It reportedly left 14 dead, including Iranians and 3 Syrian officers. It is unclear if this attack was a result of the chemical attack.

Michael Cohen, President Trump’s lawyer, has been no stranger to the news, from Trump’s affair scandals to the Mueller/Russia investigation. Through all his suspicious antics- possible hush money paid “out of pocket,” communications with Russia about a Trump Tower in Moscow, etc.- he has faced no legal repercussions.

However, it appears this no-consequence streak has met its end. This past Monday, Cohen found himself under fire as the FBI raided his office, hotel room, and NYC home via numerous warrants from the U.S. attorney.

Sources claim that Cohen is being federally investigated for bank fraud, wire fraud, and campaign finance violations. Other sources report that Cohen’s computer, phone, and personal financial records were all seized for the sake of investigation. Some sources even assert that the searches were related to Cohen’s role in the paying off of women Trump allegedly had affairs with.

Both Trump and Cohen’s personal attorney denounced the raids and what they see as a crude violation of attorney-client privilege because many seized documents involve communications between Trump and Cohen. Trump went on to emphasize how biased and unfair he viewed this investigation to be, an ironic note as Trump appointees have had to sign/permit these warrants at every step of that process.

What charges are to be filed against Cohen- if any- remain uncertain as all eyes continue to be trained on the White House and all of its inner workings.