Parker David has found his passions through theater and volunteering 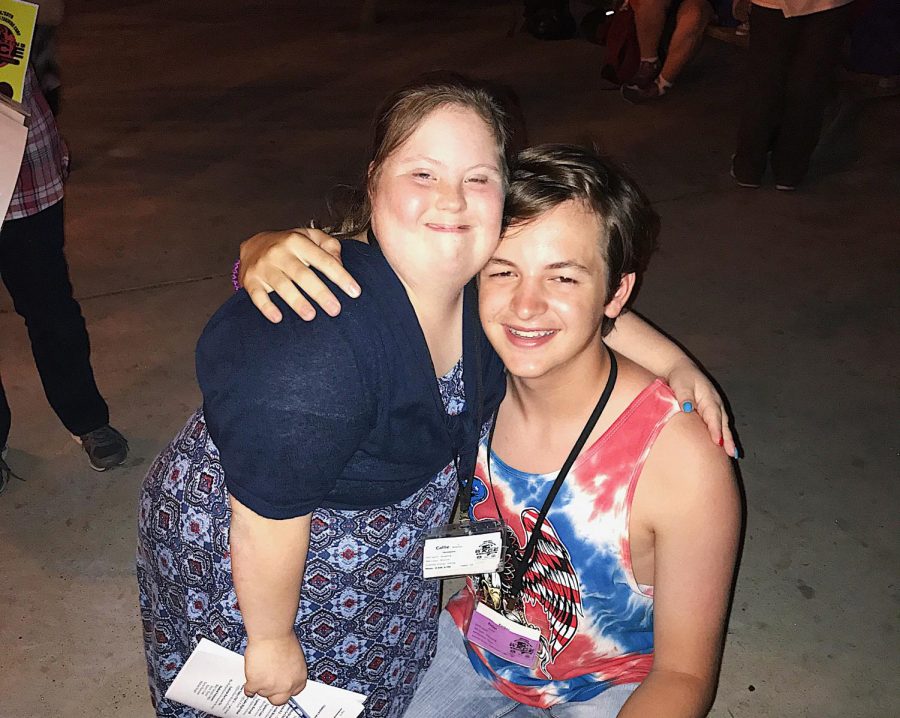 What does it mean to serve? From various perspectives and all walks of life, service differs in its meaning. However, in a general definition, to serve means to “put the interests of others above your own,” so no matter who you are, service is an act of gratitude and compassion.

Junior Parker David enjoys serving. His definition does not stray far from the general one, as it is oriented around people and showing support for others without expecting anything in return.

“I just like helping people, and I want people to be happy,” Parker said. “I’m not in NHS, so I don’t do it for the volunteer hours. I just do it to make people feel good about themselves, and so they have something good going on in their lives.”

During his last summer, he spent a week training special needs athletes at a camp sponsored by his church, all of which culminated into a Special Olympics which was complete with medals and awards. Given the title of “coach,” he was able to impact people through time-intensive swim training in preparation for the final event at the end of the week.

Other than the instant gratification of putting a smile on someone’s face, the experience proved to be pivotal in expanding his worldview.

“It was a really humbling experience, and I loved it there,” Parker said. “It was amazing. I was a swim coach, so I taught some athletes how to swim. It was hard, but I loved doing it. They love to learn, and they just love to be active. I was happy that they got to have something good going on in their lives.”

However, the week wasn’t without its difficulties. Without having been trained, the feat of teaching people to swim was quite a handful, especially with the vast age gap between Parker and his athletes who were mainly adults.

Despite the struggles they faced though, Parker still found peace in knowing he impacted someone’s life for the better, even if only for one week.

“We had little to no training before the camp, and the only training we had was how to deal with seizure,” Parker said. “It was a lot on our plates, but as the week went on, I finally got the hang of it. The experience taught me to be grateful for what I have and to be more accepting of everyone around me.

Working at the camp wasn’t the only volunteering endeavor that struck a chord with him. Through his connections through his church, he has also been able to do Yes Trip through Focus North America, a group that intentionally pours love and training into youth so they are well equipped to serve their communities.

“It’s in Grand Rapids, and we serve the community, like the homeless,” Parker said. “There’s always one day where we have to “be homeless,a�� and the leaders give us $10 to live on for around 12 hours. We invite homeless people to have lunch with us because they just love the communication, and they don’t really get that.”

By prioritizing volunteering in his life, Parker has found his passion for helping people and achieving a sense of purpose. Slowly, each experience brought him further out of his comfort zone and into the world outside of the FHC bubble.

“When I’m volunteering, I feel like I’m doing something good and that I’m saving the world- I mean not really, but still,” Parker said. “I also feel accomplished because even with things that are hard, like the Special Olympics, I felt like there was a purpose to what I was doing.”

His acceptance of people and of trying new things stems from theater, an activity that has bettered him from the first day. Its many aspects, including being on stage and the people involved, have made it an influential extracurricular for Parker.

“The people [were what stuck out to me about theater],” Parker said. “I’m not really a theater nerd; but I think having people who are so accepting, where it doesn’t matter where you come from [is important]. They will always accept you. I also just love the inclusiveness of the group that has brought me and others closer to the program.”

Apart from the people associated with theater, the actual acting has made an impact on his life as well. Being on stage is a feeling like no other; confidence and humility are only a few of the many lessons that theater has taught Parker.

“I think being on stage has just helped me see life differently,” Parker said. “You’re able to do what you need to do without thinking about what everyone else thinks. Theater made me accept what is around me more and become more humble.”

Both volunteering and theater have taken Parker far, and in both settings, he has set his talents to good use in encouraging and supporting people around him. His future, near and far, hold promise as he brings his knack for building community with him wherever he goes.

“I think that by giving my full support to people, [I can help people most],” Parker said. “It boosts people up and makes them feel better about themselves. I feel like that’s the point of helping people: to make them feel like they are enough.”