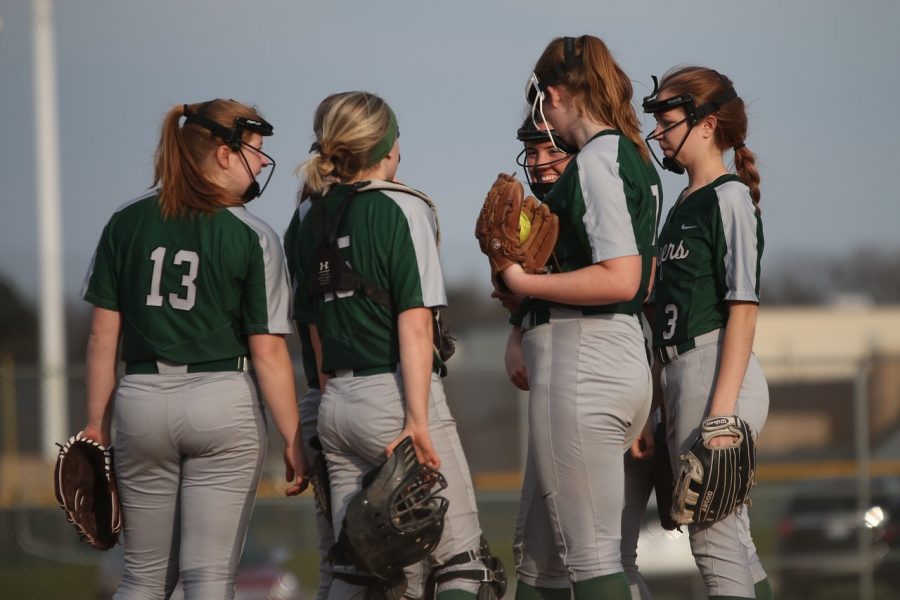 After an incredibly busy weekend on the field, varsity softball picked up two wins out of five games at Unity Christian and the Holland invite. With two tough losses to Unity Christian Friday night 5-1 and 4-2, FHC came back strong Saturday morning to beat Fruitport 9-1 and Zeeland East 14-4. They dropped their final game on Saturday in the tournament championship to Holland 6-4.

In Friday night’s opener at Unity, FHC struggled immensely to get the bats going throughout the game. Junior Alex VanElls and sophomore Maizey Szczepanek both picked up two hits, which ended up being two-thirds of the teams hits in the game.

Senior Hannah Miller had a tough outing in the circle but did not have much defensive help as the Ranger defense committed four errors behind her.

Game two was more of the same as FHC mustered only two hits and one run all game. Junior Tori MacLeod gave a great performance in the circle but had no help behind her to give her the win. FHC again committed four errors in the field. Junior Molly Donovan scored the only run of the game after coming in to pinch run for Hannah, stealing second, and making it across the plate on a Unity overthrow.

The first game of the Holland tournament was a completely different story, as FHC jumped on Fruitport for 9 runs and 15 hits. Their defense also played flawlessly behind Hannah, who gave up a run through six while striking out 10.

Junior Valerie Nuffer had an outstanding game, as she went 4-4 while being a double shy of the cycle. Junior Emma Davis also homered in the game.

Tori took the mound in the second game of the tournament and the bats were lively yet again. After a 4-run first and second inning, the Rangers never looked back in a 14 run effort. Valerie, Maizey, and junior Hailey Enbody all had three hits each.

Junior shortstop Molly Donovan was a defensive stud throughout the day. Numerous diving catches saved base hits and potentially runs.

A 2-run seventh was too little too late for FHC, as they dropped the final game 6-4 to Holland. FHC made three more errors and allowed two unearned runs. Valerie again was 2-4, picking up another triple and a run. This effort in the tournament championship gave FHC second place in the Holland Invite for the second year in a row.

FHC moves to 5-6 (3-3) and will take on the Cedar Springs Red Hawks this week in OK white conference play.