The Central Trend • May 7, 2018 • https://thecentraltrend.com/42543/showcase/forest-hills-robotics-team-wins-second-place-in-the-world/ 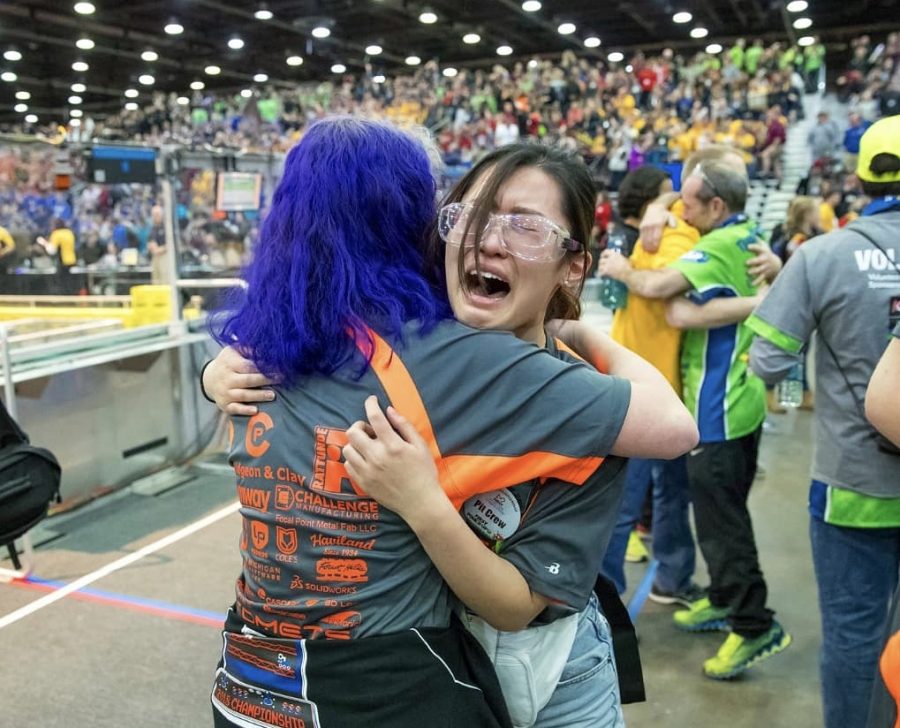 Normally, one would hear the phrase “Lights! Camera! Action!” behind the scenes of a movie or show. Two weekends ago, though, the lights, camera, and action were brought to the grand stage of the robotics realm: Ford Field.

The World Finals of the 2018 robotics season was held in one of the most prized fields of Detroit, and our very own Forest Hills Comets team had made it to the last round.

“When we had found out that we made it to the final round, I just remember everyone screaming,” senior Comets team member Kellie Zhou said. “Everyone was watching the board for our score. When it came up, everyone was hugging each other; everyone was cheering and crying. We all jumped into one giant group hug.”

Making it to the final round was a big deal. At a normal robotics competition, there are around 48 teams. At this Worlds competition alone, there were 405 teams; these were split into six fields.

“Worlds was held in Detroit this year, which was a change in venue from last year,” senior Comets member Destiny Wu said. “It used to always be in St. Louis, which was a much longer drive for us, so I really like Detroit for this year.”

This year, there were two Worlds competitions, which were held in Detroit and Houston; the tournament was split between two cities because there were just too many people for one city to hold.

As of now, Worlds will stay in Detroit for at least the next two years. In fact, the robotics realm actually beat out the NFL for rights to Ford Field in 2020.

“When they say ‘Worlds,’ they really mean people from all over the world,” Kellie said. “Houston had more of the international teams, but we got to compete with teams from Japan, Taiwan, and Canada, which was cool.”

Initially, the 405 teams found at Worlds competed in the Cobo Center of Detroit.

The top teams in the six respective fields, who have made it past ten qualification matches, then go on to quarterfinals, semifinals, and finals of their division.

Finally, The top teams in each division compete against each other to determine who gets to be in the spotlight at Ford Field. Each division is named after a famous scientist or engineer, with “Einstein” being the gateway to the next tier up.

“You don’t get to play on Ford Field unless you’re one of the final two after the initial Einstein rounds,” Kellie said. “And… that’s what we got to do, so that was pretty cool.” 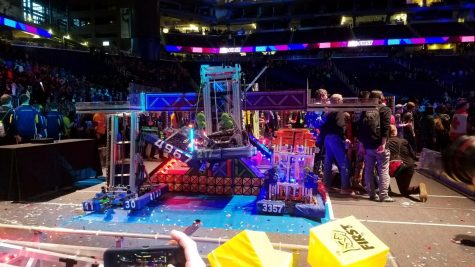 Before the announcements were made about who would be competing on Ford Field, the Comets team and another team were tied in ranking points. When this happens, the teams have to accumulate points through a tiebreaker.

“The memory of it was hazy, honestly, because of all the excitement,” Destiny said. “We couldn’t believe that we were about to make it this far.”

Luckily, the Comets’ points added up to a higher sum than the other team’s, and they were deemed one of the final two.

“Because of how far we made it, we got to be one of two teams who competed on Ford Field,” senior Comets member and head programmer Connor Stadler said. “It was neat; we had made it farther than the football team had.”

Regardless of the outcome, by being in the final two, the 2018 team had made Comets history. This was a feat previously unattained.

“Being on Ford Field was different than anything else that I had seen before,” Kellie said. “There’s only one robotics field on it, so you’re at the center of attention. There was fog being pumped everywhere. The lighting was really cool; there were spotlights on the robots. The coolest part was that there were tens of thousands of people sitting in the stands, just watching us and one other team.”

Unfortunately, the Comets team did not win Worlds due to a tragic malfunction of their robot. Though no one knows the official cause, the team’s robot stopped working during the two final matches on Ford Field.

“We actually don’t know what happened to our bot,” Connor said. “We’re working on it. All we know as of now is that it lost power in both of its matches; we just have not officially diagnosed the issue yet.”

The Comets robot had survived 101 matches throughout the course of this season. It had never malfunctioned and lost communication like this before.

“These two final matches were the only matches that our bot has ever done this,” Kellie said. “It was basically dead the entire match, so we just had to sit there for two minutes and watch our robot not move. We just had to watch as we slowly lost Worlds.”

Even though the Comets team had lost in such a tragic manner, they still held their heads high; they were proud to have made it this far. Looking back on the season, they realized they had accomplished more than they could have imagined.

One notable achievement was their Blue Banner count. A team receives a Blue Banner for every competition won. Before this season, the Comets team had won a total of six Blue Banners throughout its entire history.

“We basically won the same number of Blue Banners in just this one year as we had in all of the previous years combined,” Kellie said. “Apparently, we’re tied for the highest Blue Banner count with two other teams. That means we are one of the only three teams in the entire world who has won six Blue Banners just this season.”

Not only has the team became more cohesive as a group, they have made many outside connections as well.

“At Worlds, we actually got to see one of our former FHC members and be on an alliance with their team,” Destiny said. “That was super cool because we got to see him and work with him again.”

This unique experience to work with a former teammate was memorable for everyone.

“He was someone who programmed with me during my freshman year,” Connor said. “He programmed through junior year but moved and joined another team. It was really nice to roll with him again.”

Though Comets is saying goodbye to many seniors, the team will not lose its momentum.

“We really notched the entire team up multiple levels,” Connor said.  “It’s gotten to be more prestigious when it comes to the high school robotics world. As a senior, it makes me proud to be leaving the team better than it was when I came to it.”

With this season under the belt, Comets will be more ready than ever for the next. Each year, the team gets stronger, and the Ford Field victory is within even closer reach.

“The team has grown a lot this year,” Destiny said. “We’ve made so many more connections; we’ve met so many more people. I think we are definitely going to be a very well connected and very well equipped team in future years.”