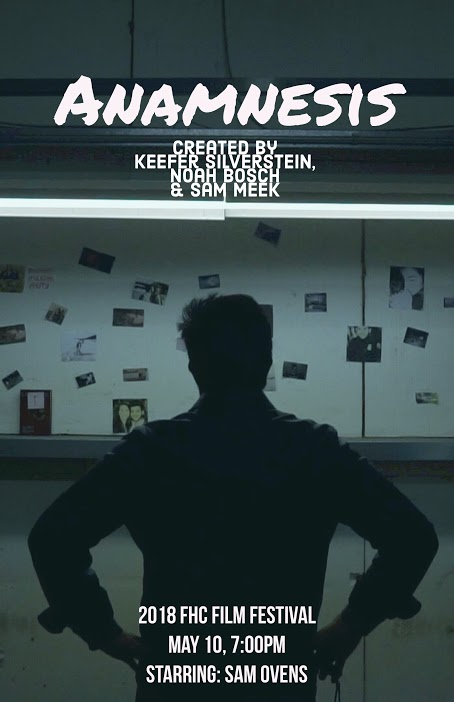 “Our film is a mystery thriller about a grizzly detective with a tortured past. He finds himself in the center of a malicious game spearheaded by an anonymous psychopath. The detective must use only strange photos and his wit to piece together the identity of the psycho before times runs out. Lives are on the line.”

“The theme of our film is that you must learn to cope with trauma, if you take it out on someone else there will be dire consequences.”

“My personal inspiration for writing this film came from the first Saw movie. I found the concept of keeping a vast majority of the film contained inside a single room very claustrophobic and intense. The mystery element I borrowed from memento, where a man also uses certain images (Tattoo’s on his body) to recall his memories and solve a puzzle.”

“The filming and editing process all went down rather smoothly. What took time and effort was the delicate process of planning out our film shot by shot and line by line. The editing was simple after that since the sequencing was all perfectly in order.”

“After crafting the character of the detective (Our films protagonist) I knew that no high schooler player would have the acting chops to play a binge drinking tortured soul, so I enlisted outside help. That being Sam Ovens (who attends MSU and is 19 years old). I play dungeons and dragons with him on occasion, and he loves doing short films so he happily accepted my proposal. We were very fortunate in that Sam’s little brother Callum was readily available to play the detectives son.”

“My favorite part of the creative process would definitely be the creation of the story itself through writing. As an aspiring screenwriter, I’ve had a decent amount of experience with writing scripts. I saw the film festival as a chance to really show what I can do. So I wanted to tell a gripping and complex story that still remained within the parameters of our 15-minute time limit.”

“Through this story, I’m trying to convey a message about the importance of dealing with trauma in a healthy way, and the horrible consequences that can come from taking out your anger on those who trust you. Also, I want to send a warning message about how revenge can consume someone’s mind and eat at their morals.”

“The audience can expect a pulse-pounding thrill ride with scattered bits of sentimental family drama. As well as a shocking twist.”

“Our film differentiates itself from the rest of the pack by telling an extremely complex story; if the audience is not paying attention, they will most likely be very confused. However, if watched fully through, the audience will be treated to a multi-layered mystery that they may or may not unravel themselves as the movie goes along. Which is always fun. They will also, I believe, feel our experience and passion for filmmaking through this short film.”
Delete Image
Align Left
Align Center
Align Right
Align Left
Align Center
Delete Heading