The Central Trend • May 13, 2018 • https://thecentraltrend.com/42863/showcase/charlotte-delaney-addy-kaechele-and-zoey-guikema-announced-as-next-years-drum-majors/ 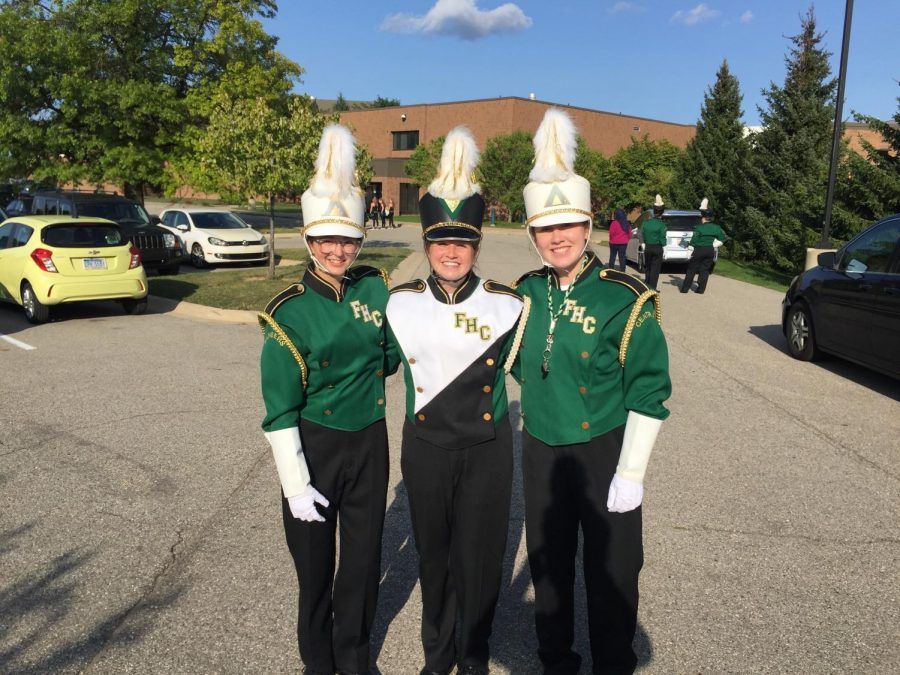 It’s October, and there’s a cool fall breeze blowing over the organized lines cascading down the football field. The sonorous music from the assembly of instruments is supported by the booming beats produced by the drumline, and leading the whole show are the three drum majors, marching at the front of the pack or standing on the podiums conducting brisk movements to control the tempo. Next year, this leadership will be provided by rising seniors Charlotte Delaney, Addy Kaechele, and Zoey Guikema.

Charlotte, Addy, and Zoey have all been devoted members of the band since middle school. While Charlotte fits in with the clarinet section, Addy was drafted into the trumpets, and Zoey found success with her trombone. With the structured, calm atmosphere of concert band contrasting with the energetic vibe of marching band, throughout the year, each of them found something to love.

“I think it’s kind of a good break, for me,” Zoey said. “I find that playing my trombone is kind of a destresser. Obviously, you have to think about it, but it’s also something that’s pretty instinctual once you get there.”

As a drum major, however, they no longer hold the chance to play instruments for the audience. Rather, they march at the front of the pack, leading the band onto the field. Subsequently, they step onto raised podiums and stand to face the band, giving them direction. Their role requires more leadership and energy, keeping both standards and spirits high within in the band.

“You have to go above and beyond what regular band members do,” they said. “You’re there for the band director, like her right-hand man. Also, for all the shows, you are keeping tempo and just trying to make the band sound as good as it can. You’re like behind-the-scenes but also the face of the band.”

This year, Charlotte and Addy were drum majors, along with current senior Sydney Verlinde. Next year, with Sydney graduating, Zoey will be the newest addition to the drum major team. Along with a new drum major, next year will mark the beginning of the first full season with the band’s new director, Laura Zilhaver. Zilhaver replaced old director Robert Ash in a sudden turn of events last winter.

“It was kind of scary at first,” Charlotte said. “We were losing the band director we had known for our high school band careers. We got this new band director, who we didn’t know at all, and it was scary. But we welcomed her in with open arms, and it turned out to be something really cool. Becoming a drum major has been my favorite part of high school; it’s the best thing ever.”

As drum major is the highest-ranked position in the entire band, the audition process to become one is extensive. Candidates must play the national anthem and fight song from memory, attempt to sight read, take part in a conducting test, as well as be interviewed by Zilhaver.

“I’m super excited for it,” Zoey said, “but honestly, I didn’t have super high hopes that I was going to get it. I left [auditions] pretty nervous because I really wanted to do it, but I didn’t know if it was really in my wheelhouse. It’s kind of been a wild ride from the beginning. I have two of my best band friends [with me], so just experiencing it with them will be [great].”

A defining factor of Charlotte, Addy, and Zoey’s future success will be their prolonged friendship. Charlotte and Addy grew extremely close through being co-drum majors last band season, and Zoey has known both Charlotte and Addy for years. Spending a lot of time together over these past four years has brought the girls closer together, which will undoubtedly help them to succeed during this upcoming season.

“I think we’re already going to be closer in general,” Addy said. “We already know what the other ones are thinking. We’re already comfortable with each other. Last year, I didn’t really know [senior drum major] Sydney, so it took a little while to really hold a conversation without it being awkward. But for the three of us, we’re already close friends.”

As drum majors, Charlotte, Addy, and Zoey are held to high standards solely because of their position, and the rest of the band looks up to them for guidance and leadership. They serve as support for all members and the director, as well as inspiration for younger years. As the ‘head of the band,’ their role next year will be imperative to the band’s success.

“For me, I think of the drum majors freshman year, especially Emily Toppen, and how good and helpful she was,” Addy and Zoey said, “and I think of how someone looks up to us with the same expectations. As a freshman, I really looked up at them. I never even imagined that I’d try out, nonetheless get it. I looked at them thinking that they were scary and so responsible.”

Next year, the drum majors will be aiding Zilhaver with the new levels she wants to take the band to. By going to a new school for band camp this summer, the leadership team is aiming to have all music memorized by band camp. Overall, they are striving to be a better band and to create more of a family atmosphere.

“I’d like it to be more underclassmen oriented, like reaching out to the freshman and sophomores who are just coming into band and don’t know all the ropes,” Zoey said. “[It’s important] to keep them here and give them confidence, so when they are juniors and seniors, they can do the same. That keeps the cycle of the band up because recently, we’ve been losing people from the band program. I think keeping the young people in it and getting more people involved is important.”

Next year, with their close friendship and passion for band in tow, Charlotte, Addy, and Zoey are well-equipped to aid Zilhaver and the band program in reaching its goals. No matter which direction the band takes in the future, this experience will be an incredible one for the new drum majors, and next year’s show will be a treat for the audience.

“I’m looking forward to making more relationships and better connecting with people,” Charlotte said. “Knowing it’s my last year of high school, I’m doing these special things with two of my good, good friends that I’ve known for so long. Looking over to your left and right when you’re conducting, you see these two people that you’ve grown to know so well. It’s a special feeling. You look over and just smile each other and they’re just jamming along. It was the best feeling for me.”