The Central Trend • May 15, 2018 • https://thecentraltrend.com/42995/fx-student-news-show/sports/varsity-softball-drops-a-tough-pair-of-conference-games-to-lowell/ 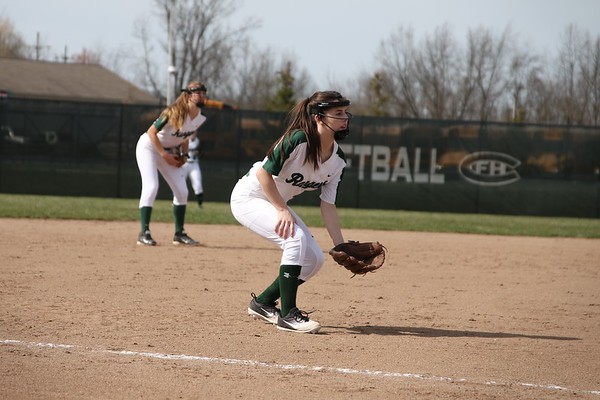 Varsity softball had the biggest conference series of the year against the Lowell Red Arrows, who is unbeaten in the conference. Despite playing some of the best ball of the season, they ended up dropping both to the Red Arrows 6-3 and 9-5.

Things got going for the Ranger offense in the bottom of the second when juniors Tori MacLeod and Lauren Mittlestadt reached on a base. Junior Zoey Guikema then hit a bomb to center, where the Lowell fielder couldn’t come up with the ball to score both runs.

Senior Hannah Miller was in a groove through seven innings and only gave up two to a potent Red Arrow attack. After a 2-2 tie in the bottom of the seventh, FHC was forced to go into extra innings.

Lowell manufactured runs in the top of the eighth with a couple of bunt base hits and walks. A two-run bomb was the finishing blow that put Lowell up. A RBI double from junior Molly Donovan in the bottom of the eighth wasn’t enough for FHC, and Lowell ended with a 6-3 victory.

The second game didn’t go as well for FHC as Lowell came out swinging hard early. The Red Arrows put up 4 runs in the top of the first, with two girls going yard. The Rangers faced tough pitching and couldn’t get an offensive attack going. The defense had a few errors throughout the night and shot themselves in the foot at a couple bad times. The Rangers were able to chip their way back each inning to trail by 2 in the top of the fifth. A 2-run double from Lowell after the weather delay sealed the 9-5 victory once the game was called due to thunder.

FHC moves on to face the Wyoming Wolves and the Kenowa Hills Knights. The Rangers will most likely finish in third in the conference and are gearing up for their first round of districts.