The Central Trend • May 21, 2018 • https://thecentraltrend.com/43136/opinion/reviews/beautiful-people-will-ruin-your-life-is-the-perfect-prerequisite-to-summer-music/ 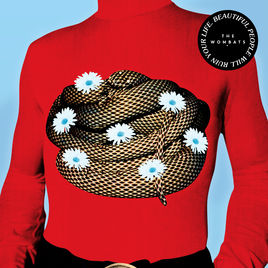 As the seniors are granted the freedom from high school’s grasps, I, a junior, sit in class, itching for that same blissful ability to simply let go. My brain continues to check out for the next few months, and I have been frantically searching for music to match my mood. It was right when I was ready to give up entirely on my perfect summer playlist when I discovered The Wombats’ most recent release Beautiful People Will Ruin Your Life, an album that exemplifies everything I look for in summer jams.

In 2015, The Wombats hit single “Greek Tragedy” resonated with me. I can hear that song to this day and be immediately transported back two summers, happily singing along during my car rides to nowhere. Ever since then, I have followed their releases as best as I could, but I was a little late to the party this time.

Beautiful People Will Ruin Your Life was released in the February of this year, but the overall tone of the album perfectly encompasses the hectic yet relieving end to the school year. The eleven-track album features the familiar vocals of lead singer Matthew Murphy but incorporates new experimentations in backbeats and style. Songs like “Lemon to a Knife Fight” are ridden with staples of their music: loud, hard-hitting beats blended with the classic raspy indie-rock voice heard across the genre.

It’s songs such as “White Eyes” and “I Only Wear Black” that make this album exemplary. For me, a lot of summer includes jamming to obnoxious indie-pop, but not all situations are suitable for that type music. Bonfires, graduation parties, and other outdoor endeavors of that caliber tend to err on the side of casualty. That does not deem them events any less deserving of some solid music. Both “White Eyes” and “I Only Wear Black” are perfect tracks to act as background music for such activities.

My favorite track is undoubtedly “Lethal Combination.” It falls into the category of the laid-back summer tune, yet for me, it encompasses everything there is about summer: an aura of carelessness, freedom, and the ability to simply relax and live in the moment.

Beautiful People Will Ruin Your Life represents all someone could need from a summer album. The upbeat and typical indie-beats are a surge of familiarity during a period of time filled with new experiences. With the days left in junior year quickly dwindling away, it’s safe to say this album was a perfect prerequisite for the next three months.