The Central Trend • May 30, 2018 • https://thecentraltrend.com/43472/showcase/sophomore-carolyn-mast-immerses-herself-in-asl/ 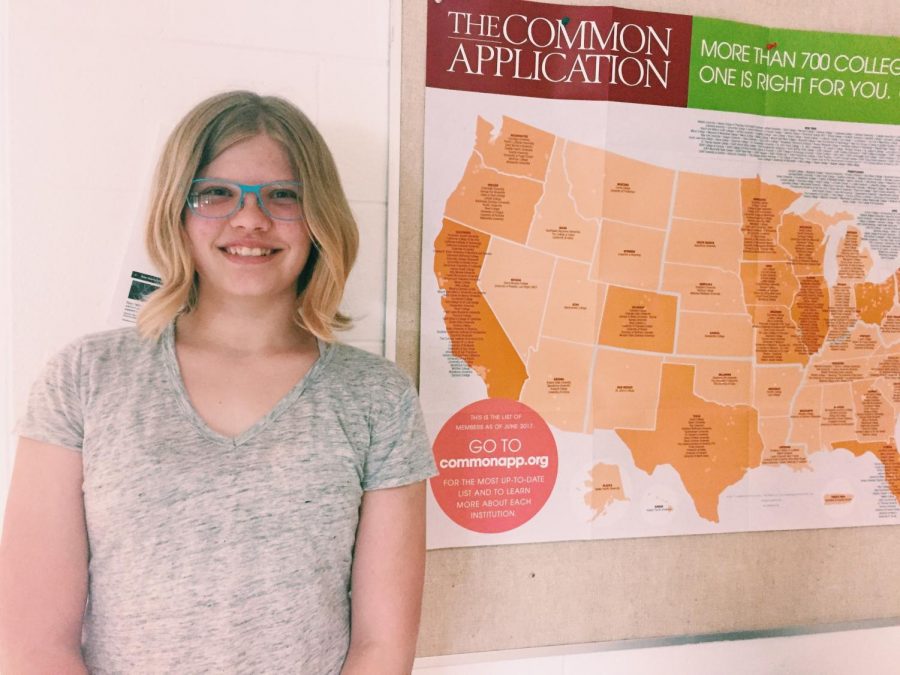 Sophomore Carolyn Mast carefully wraps a blindfold around a third grader at her deaf-blind station, immersing both herself and multiple kids into the deaf culture. As she navigates her blindfolded kid to the crayon and paper, she immediately sees a young student learning first-hand what it’s like to be blind and deaf.

This was a look into Carolyn’s day at an elementary school a couple of days ago. Her, along with 15 other American Sign Language (ASL) students, took a trip to a local elementary school to introduce young students to deaf-blind culture. There were three different stations, each having activities pertaining to either the blind or deaf community, and Carolyn ran the blind station.

“I was at the blind station,” Carolyn said. “They were blindfolded and had to guess what an object was, write sentences, and draw blindfolded. When they saw what they drew, it was all over the place and kind of curved. It kind of changed their worldview.”

With the ASL 3 and 4 classes graduated, Carolyn got to take the unexpected trip over to the elementary school and run her station. After learning the language for two years now, she got to translate her knowledge and insight to the young kids about a community she thinks is overlooked.

“[ASL] kind of opened me to a new community since deaf isn’t talked about a lot; it’s kind of ignored,” Carolyn said. “We learn a lot of stuff that’s really cool. Third grade is young, but I think they started to understand the difference between [being blind or deaf and not]. It kind of blew their minds a little bit.”

Carolyn saw that the kids were enthusiastic about learning the basics and applying their new knowledge to the different stations. Towards the end of the trip, Carolyn’s teacher signed a children’s book, and the students were completely enthralled.

“I think [they enjoyed it] for the most part,” Carolyn said. “It’s a lot, [but] once you get the basics down, it flows pretty easily. In the end, we were signing Brown Bear, Brown Bear. It was really cute; they were just sitting there watching [with] wrapped attention on Ms. W as she was going through it.”

Carolyn also feels that same enthusiasm as she learns the language. Because she struggled with other world languages, Carolyn decided that ASL would be a good choice because of the muscle memory. As Carolyn built a foundation, she continued to learn more about the culture of the deaf community.

Carolyn has three cousins that are deaf, each with various devices that help them hear. One has a cochlear implant, another uses a hearing aid, and one even reads lips to converse. They also sign, and Carolyn has been learning bits and pieces of the language since she was young. Carolyn has learned tremendous amounts about ASL and that community through school, the recent field trip, and her cousins.

“Really learning about the culture was mind-blowing,” Carolyn said. “There’s so much togetherness. Even though they can’t do some things, they still find ways around it. They still text and drive, and they have phones. There’s some cool stuff that you wouldn’t expect them to do, but they do it anyway.”

Not only does Carolyn enjoy ASL, but she also has been experimenting with different elements of English this year. With a passion for the more creative side of English, she has decided to skip AP Lang next year, but plans on taking AP Lit her senior year.

“[Language] is hard, [and] I never really had a good base for it,” Carolyn said. “My English teachers when I was younger weren’t the best, so I have no clue what conjunctive verbs are. That makes it hard. [Language] is a lot of thinking and analyzing which is not always my strongest suit. I like writing and reading and seeing what other people can do with their talents.”

Carolyn admits she isn’t the best at creating her own stories but still enjoys seeing her characters grow and develop before her own eyes.

“I like creating new [stories],” Carolyn said. “I may not always be the best, but it’s fun to start something and see it grow and get better as you work on it. You can really just create a whole new world.”