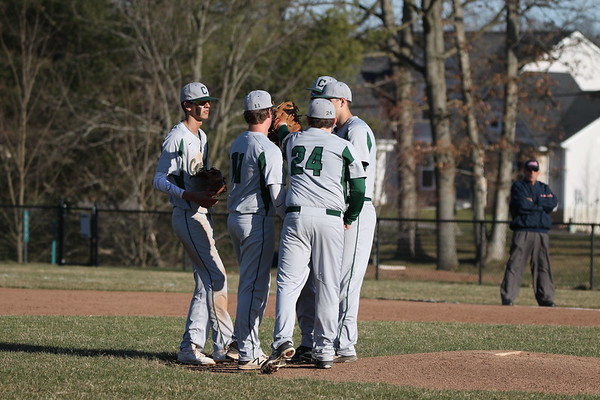 After a comeback win earlier in the week, the varsity baseball team went into District play yesterday at Byron Center. Game one set the Rangers against East Kentwood, where they won 8-1 to advance to the District Championship.

The offense was on fire throughout the game as FHC tallied 9 hits. A breakout 6-run second inning sealed the victory, as the Falcons couldn’t put more than 1 run across the plate. Senior Miko Rodriguez and Nate Doolittle led the offense with 2 hits apiece.

Nate took the mound to strike out 6, walk 3, and allow 2 hits. The Ranger defense had only 1 error behind him.

The second game of the day was against tournament host Byron Center. The Bulldog bats were hot out of the gate and FHC couldn’t respond. The Rangers lost 14-1 in five innings.

The Ranger defense played sloppily, as they gave up 14 runs on 9 hits. Only 4 of Byron Center’s runs were earned, due to 6 defensive errors. Senior Michael Peliotis led the team at the plate by going 2-3, while Miko had the only RBI of this game.

Despite a poor last performance, the Rangers ended with a 23-8 overall record and made it one game farther than last year’s District tournament. FHC will graduate 8 seniors from the roster and will have to rebuild in the offseason to come out strong next year.