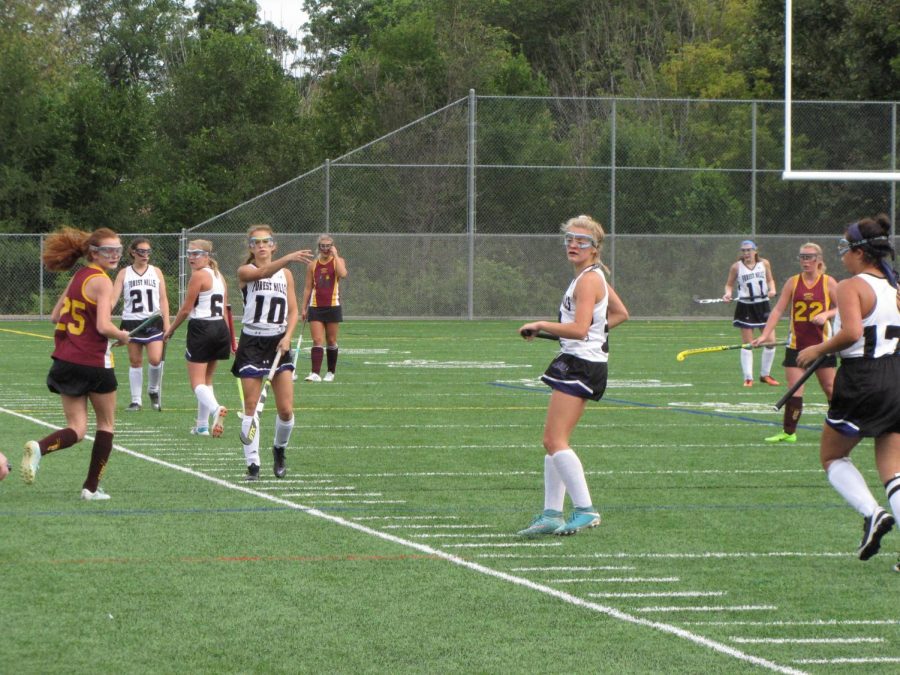 With exactly 11:19 left on the clock, FH scored their first and only goal of the game. However, this one goal made the difference as it was what won them the game by a score of 1-0. This goal was scored by FHC senior Madisyn Bunke with the assists from both FHE junior Katie Noom and GRC senior Emma Dodson.

“We just kept pushing and pushing and getting those penalty corners,”Head coach Andrea Shaner said. “We had to pull the girls out for a bit and just have that timeout to kind of settle them down and we said, ‘We know we can do this, we are so close, we just need to get that one in.’ Once we finally did that it just felt so good, we knew we had it.”

Madisyn’s teammates agree that it was a critical goal as well.

“It made me feel more confident,”FHC junior Bella Piccione said. “Once we get one goal in, some of the pressure is off of us and we work better.”

Collectively, FH had a total of 16 shots on goal during this game, the majority of which were in the second half of the game. The offense was able to get in there and really work their shots and get close to scoring. Hard work was put in from all of the offense but Bella moved the ball in some critical ways as she helped with moving it onto Mercy’s side.

“I didn’t expect [this game] to go as well as it did,” Bella said. “But the team worked together and I think that’s what helped.”

Shaner also had some expectations reached during this game. The girls needed to work on playing the whole field and they did exactly that, if not more.

“We’ve been working on stretching the field,” Shaner said. “Not playing too tight, and actually working on passing. Not just one person taking it down the field, but working as a team.”

Not only was the offense on-point, but the defense really stepped it up at the half as well. They shut down the Mercy offense almost immediately. One of the biggest defenders of the game was FHC senior Jayden Bonsall.

“We’ve been working a lot on our defensive sag,” Jayden said, “which helped us out at the end of the day.”

The defense has had it easy in the past two games, as the ball has spent most of its time on the opposing side of the field.

Before halftime, FH took their first six shots on goal and were sadly unsuccessful. It was a back-and-forth game, as the ball was taking a trip up and down the field constantly. The 30 minutes were up before the team knew it and that was the end of the first half.

FH is looking to take the State Championship again this year as their first year in Division 1 and the team has many plans of how to do so.

“Honestly, we are just exceeding our expectations,” Jayden said. “We’re just trying to get as many wins as possible. Just making it to quarterfinals would be amazing considering the fact that we’re now D1.”

FH now has a record of 4-2 and was supposed to play Hartland in their next game during the same day, but the opponent forfeited, making FH’s record 5-2. The next game FH will play is against Pioneer High school on September 13.

The road to states has begun yet again for FH and they’ll continue to work hard and keep the title under their name.

“[The coaches] are trying to keep [the players] on their toes and working hard in practice,” Shaner said. “When we get onto the field we’re taking everything we’ve learned in practice and using it.”