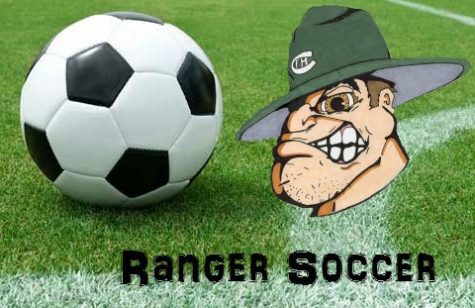 The JV boys soccer team had a tough match against its rival EGR. The Pioneers had a very solid squad, squashing the Rangers 3-0. Although it was a shutout, the Rangers played a great game with multiple shots on goal. Unfortunately, the boys couldn’t find the back of the net due to a strong EGR defense. The Rangers are now forced to a 3-4 record in their season, and they have a tough game Tuesday, September 12 against Ottawa Hills.

In the first 30 seconds of the game, the Rangers had some miscommunications on defense, and the Pioneers found a way to slip through and lob a shot over freshman goalie Ryan Fitzgerald. Ryan had a hard matchup against the strong opposing offense but managed to save multiple shots in the first half. The Rangers must have had a very inspirational chat in the locker room at halftime, for they came out with energy and started out playing with very high intensity. Sophomore Matthew Mahoney forced multiple balls through the defense to the feet of the sprinting forwards, creating multiple opportunities to score. Although many chances were given, none of the shots would fall on goal.

The boys of JV soccer played their hearts out but still came out on the bottom losing to EGR, but they still have multiple games to make up for that. They are still 3-0 in conference play and have a strong team to keep that record positive.