Varsity volleyball is defeated 3-2 by Northern in close match 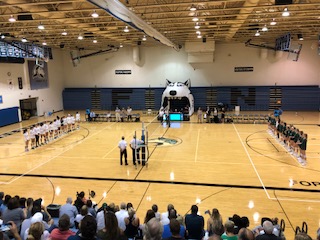 After being defeated by Forest Hills Northern in the Battle of the Hills, FHC varsity volleyball was looking to take revenge in their first conference game of the season. The match was incredibly competitive, but in the end the Huskies once again took down the Rangers 3-2.

Game one was neck and neck for the first few points. Eventually the Rangers were able to pull away from the Huskies, earning a three point lead 9-6. Sophomore libero Julia Bouma earned an ace, and with now a four point lead, forced Northern to take a timeout. The scoring run continued with multiple errors from FHN and a killer block from senior hitters Katrina Bodkins and Caileigh Treash. Sophomore setter Hannah Bergman scored an ace and Northern once again took a timeout at 14-7. Freshman hitter Sophia Shields and Katrina both dramatically impacted the second half of the game, each earning 3 points to finish out the game 25-18.

“I’ve been watching varsity teams compete most of my life,” said freshman Sophia, who had 9 kills throughout the night. “It’s definitely different playing on the court than watching from the stands. Any concerns I had were quickly overshadowed by my drive to beat Northern though.”

Northern came into game two wanting redemption from game one and quickly got out to a 11-3 lead. First year head coach Dayle Wood knew the errors were getting to the team and took a timeout so the team could get back into focus.

“[We need to work on] having consistency and believing in ourselves every single point,”  Wood said. “Being mentally tough and shaking off those errors [will also be important].”

After the minute rest the Rangers earned 3 consecutive points; a kill from freshman Brooklyn Conner and junior Lauren Schofield, and an ace from senior setter Kate Ryan. Despite the small momentum change, the Rangers still let their errors get the best of them and fell back into their previous scoring drought. The Huskies took game two 25-10 to tie the series 1-1.

Katrina ignited the fire in set three with a kill to give the Rangers the 1-0 lead at the start of the set. Kate was able to keep it burning with 2 consecutive aces. This and multiple Northern errors put the Rangers up 6-0. The momentum continued and the team gained an 11-2 lead. Northern was eventually able to get it within 6, but couldn’t conquer the Rangers in set three, where FHC took the set 25-16. Northern was able to do the same in set four, winning it 25-13, to once again tie the series 2-2.

Set five was tied 4-4 at the beginning, but Northern went on a 6-0 run, gaining a substantial 10-4 lead. Lauren earned the final point for the Rangers before they were defeated 15-5.

This first game puts the Rangers 0-1 in conference play. Their next game is Thursday against Northview.

“We can only go up from here,” Wood said. “I think we’re going to rock this conference and show them that we are not going to roll over, we are not a team to mess with.”