Abby Stead’s visit to Oxford, England was an impactful experience of self-discovery 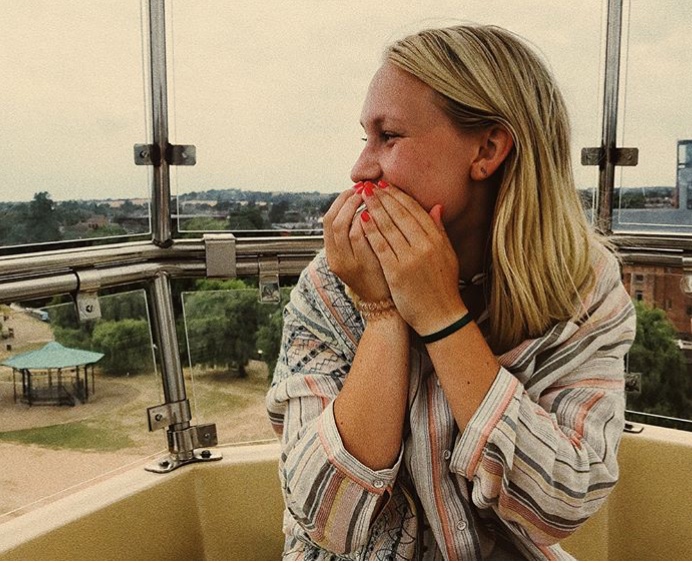 “I feel like I met myself this summer,” senior Abby Stead recalled, a genuine smile growing upon her face. “I really got to experience what I’m like in different situations; I have never been the person to shy away from a new experience, and I knew that. But I always felt like I kind of went into those new experiences still timidly, even though I didn’t avoid them all together.”

Before Abby embarked on her final year of high school, she was able to spend two weeks in Oxford, England with the New York Times Student Journeys program. Through this program, Abby was able to immerse herself in the culture and real-time newsworthy events in Oxford and other cities nearby in England. Not only did the trip widen Abby’s knowledge about the world around her, but it was also two weeks of self-discovery and bonding with strangers that shared similar passions, ultimately turning into some very close friends.

In December- seven months before the trip- Abby was scrolling through Instagram when she found an ad for the New York Times Student Journeys. After looking through the different programs and filling out a straightforward application, which was completed at two in the morning, Abby went to bed hopeful for news that she got into the program.

Sure enough, Abby’s parents got the call the very next day saying that she would be spending two weeks in Oxford, England.

“I was in Mr. Anderson’s AP World History class [when I found out],” Abby said. “I was so excited. I was thrilled that I had gotten in, but I didn’t really know what I had just gotten myself into. It was just kind of this thing that was happening in July; it didn’t seem very pressing at the time because it wasn’t very close.”

While Abby was extremely excited to expand her knowledge about different events in the world and write about them, she didn’t want to lose sight of her junior year. Abby focused on staying in the moment and enjoying each opportunity that presented itself before the Oxford trip.

When departure day arrived in July, Abby was dropped off at the JFK airport knowing absolutely nobody. The New York Times Student Journeys program was split into three different tracks: journalism(which had about thirty students), arts and culture(four students), and current events(ten students). Abby chose the current events track, which also had elements of public relations and economics. Because Abby’s track had so few people in it, she hadn’t met anyone yet who were in the same group as her.

About to embark on two life-changing weeks in another country, Abby stepped onto a plane full of strangers who were already connected by their passion for writing and the world around them. Even though Abby had not yet met anybody, she was already connected with the people around her through their similar passions. Because each student was willing to spend two weeks away from home to enhance their writing skills and knowledge about the world, they all shared a strong dedication to their craft.

“I was feeling a little bit nervous about [not knowing anyone], even though I’m a little bit of a social butterfly,” Abby said. “I realized that I’m very extroverted, and I kind of jumped at the opportunity to meet new people.”

Once Abby arrived in Oxford, she met her roommates, who were on the journalism track. Saint Stephen’s House, the five-story building located on campus, was where Abby and her two roommates recharged at the end of each long day.

Because her roommates were in a different group, Abby only saw them in the morning and at night. Consequently, Abby’s close friends were in her current events group because they spent so much time together.

The current events group was thrown into a Trump protest their first full day of the trip. After a two-hour bus ride to London, their group leader sent them out with the other protestors to interview, observe, and participate.

“I just remember being on the bus- I sat with a friend who I met at the airport the day before- [and watching] people get on the bus who brought signs,” Abby said. “It was really, really fascinating. The signs were sometimes kind of vulgar, but really funny.”

Abby remembers how captivating it was to be with all of the passionate protestors, surrounded by them and their vulgar signs in the heart of London.

“It was a very peaceful protest, besides the kind of vulgar signs… that was fun to watch,” Abby said. “We got to interview a lot of people who were marching; that was just incredible.”

While interviewing a stranger in the middle of a protest may seem daunting, Abby found it relatively easy for that exact reason: she didn’t know them, and they didn’t know her. She found that people were eager to speak about the things they were passionate about, and Abby also used the fact that she wrote for The New York Times to her advantage.

“When you’re walking up to a stranger in a country you don’t live in, or it’s a stranger from a different country altogether than the one that you’re both in, it’s really easy [to interview],” Abby said. “You also realize that when you’re in situations like the Trump protest, those people want to talk to you because they’re obviously very passionate. [When] they hear that I write for the New York Times, that’s kind of a big thing.”

While Abby did write a couple of blog posts with her interviews, the current events track was more about experiencing rather than writing. The journalism students had to write a lengthy blog post every single day, whereas the current events group reported and then wrote short captions under a picture they took.

The Oxford trip was based around journalism, but the current events track had a lot of exclusive activities where Abby was deeply involved in very real events.

Abby experienced a wide variety of really amazing opportunities, which included trying cuttlefish, watching a modern adaption of Romeo and Juliet in the town where William Shakespeare was born, visiting bookshops and record stores, and just submerging herself in the history and culture of every little town she was in. Abby loved having the time to just experience everything England had to offer, from the small cafes and five-story bookstores to the protests and real-time reporting.

“It was more doing it instead of writing about it,” Abby said. “Our group was more activity-based [instead of] project-based. A lot of the time we had free time to just be wherever and talk about things and just experience it. It was awesome.”

When they visited Stonehenge, one of the seven wonders of the world, Abby interviewed some of the people there and was able to write down small snippets of the information they gave her. Abby liked freely writing little excerpts instead of the hard-hitting articles the journalism students were required to do.

“We interviewed people at Stonehenge, which was really cool,” Abby said. “We got to add those quotes to our pictures and videos; we would do little captions for things and quotes taken from people we interviewed. It was really cool to get the little snippets instead of hard writing.”

The students weren’t completely on their own with the writing and reporting; two New York Times experts visited to offer their expertise and journalistic advice. Kim Barger and Richard Pena. These two professional editors and writers for The New York Times were there to help and instruct the current events group along the way.

Abby believed Kim Barger was one of the most inspiring people she had ever met because of her willingness to go anywhere for any story. Barger was thrown into Afghanistan blindly to report and write, similar to Abby’s experience in Oxford. Barger was also a little bit shy and nervous, which was the same way Abby felt at the beginning of the trip. Abby thought it was amazing to hear from someone who thought and felt so similar to the way she was feeling.

“On a Monday, our New York Times experts came,” Abby said. “Each group had two experts who were New York Times writers or editors. It was insane. Richard Penya is a five-time Jeopardy winner, and Kim Barger has a book adapted into a movie. She was one of the most inspiring people I’ve ever met— just really cool. It was really cool to meet her and work with her.”

By the end of the life-changing two weeks in England, Abby undoubtedly realized just how independent, but also extroverted, she is. Being in another country with complete strangers and encountering a multitude of unique experiences, revealed a new side of Abby that isn’t always shown at school.

“I realized that I’m definitely a lot more independent than I thought,” Abby said. “I’m [also] a lot more outgoing than I thought. I realized that very quickly when my friends who I made there- who are now some of my great friends; I talk to them every day- could not believe that I’m quiet at school. I did kind of have an ‘oh, wow’ moment when I realized that was me at school because that is not me at all. When you go into new environments you learn so much about yourself; I was really glad that this experience could show me more about me.”

Not only did the trip reveal Abby’s extroverted personality, but it also helped her finalize future decisions. Because of her strong passion for traveling and a newfound love for England, Abby will be applying to colleges in and near Oxford. She is definitely planning on applying to Oxford, Cambridge, and the University of College London, which is a difficult and extensive process.

For Oxford and Cambridge, Abby has to know what major she would like to pursue so she can take certain tests for the applications. She has always been fascinated by history and social sciences, so those are strong considerations for a future major. Even though her talent and passion for journalism are evident, her true fascination lies within all aspects of social sciences.

Because of the two weeks of self-discovery, experiences, and knowledge the Oxford trip offered her, Abby is prepared for her final year of high school and the years to come. With an extensive range of experiences and knowledge under her belt, Abby is confident in herself and her future plans.

“Even if I don’t go to any of the schools that I applied to, I will definitely be [studying] abroad,” Abby said. “It’s something that I would be really fascinated to do to just get that experience of studying in another country. I know the things that I like, and I know the things I’m good at, now more than I ever have. I’m kind of just chasing after those things.”