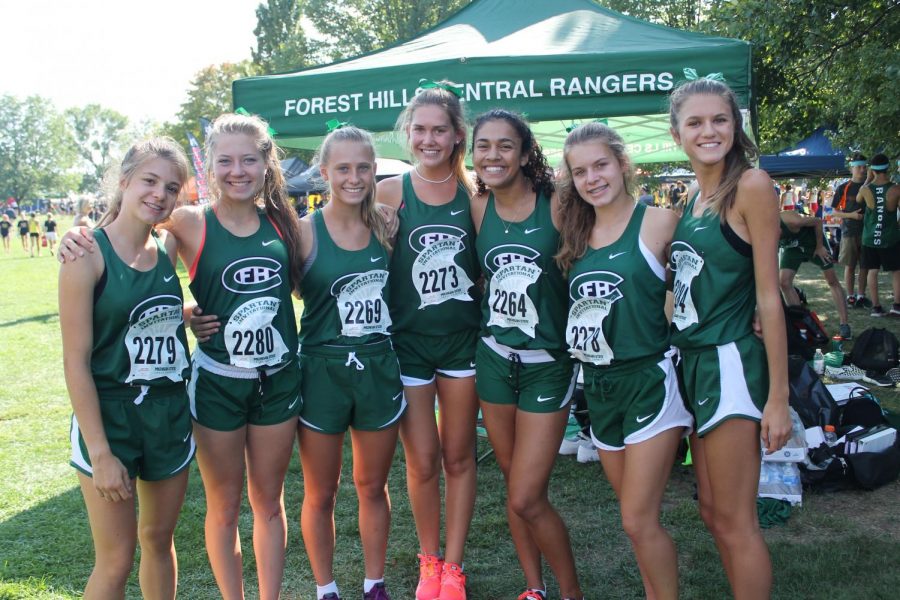 “Our girls team placed eighth which is incredible, I could not be more proud,” Whitney said. “My personal performance was very exciting to me, I got top 30 at the meet so I was awarded a medal and got a chance to go on the podium.”

Alongside Whitney was junior Nicole Marco. Nicole cruised through the finish line in thirty-first place, with a time of 20:24.3; only eight seconds behind Whitney who had finished with a time of 20:16.0. Also placing for the girls was senior Susannah Bennett; Susannah placed sixtieth out of the several hundred other girls she was up against.

“I actually feel like I raced really well at MSU, despite the hot temperatures,” Susannah said. “MSU is generally a pretty good meet competitively because the crowds of people really carry you through the race. The course itself is a golf course, meaning it’s flat and makes for fast racing. I think that the team did really well and everyone had amazing finishes and looked strong throughout.”

Even though the girls had lost one of their key runners, sophomore Emma Hansen, to an ankle injury, they were still able to go out there and compete with the other teams. Junior Ellie Harner was pulled up to varsity to fill in for Emma and ended up placing 187 out of the 249 other girls. Ellie finished with a time of 24:13.5, and helped the team with her performance.

Not only did the FHC girls cross country team place phenomenally in their race, but so did the boys. The FHC boys team secured thirteenth out of thirty-eight teams. Their lead runner was senior Geoffrey Batterbee. Geoffrey ran a 16:59.9 time allowing him to place eighth out of the 277 other guys in his race.

“It really helped our team morale when Geoffrey was able to finish in eighth,” senior co-captain Tripp Derrick said. ”I didn’t get a chance to actually see him finish the race, because I was still running, but it gave our team a lot of points.”

There were two other racers who, along with Geoffrey, placed in the top 85 runners for the guys team. One of them was freshman Samuel Yeager who secured seventieth place, with a time of 18:00.5.

“Sam raced really well at the meet, especially since he was a freshman,” Geoffrey said. “He was definitely one of our top racers this weekend.”

The other guy to place in the top 90 for the Rangers was junior Nicholas Hatley. Nick completed the race in eighty-seventh place. His final time came in 18:14.0, just one second shy of the guy in front of him.

Overall, the Rangers boys and girls varsity cross country teams had a very successful meet at this past weekend’s Spartan Invitational. They will race again this Thursday, September 20 at Cedar Springs High School.