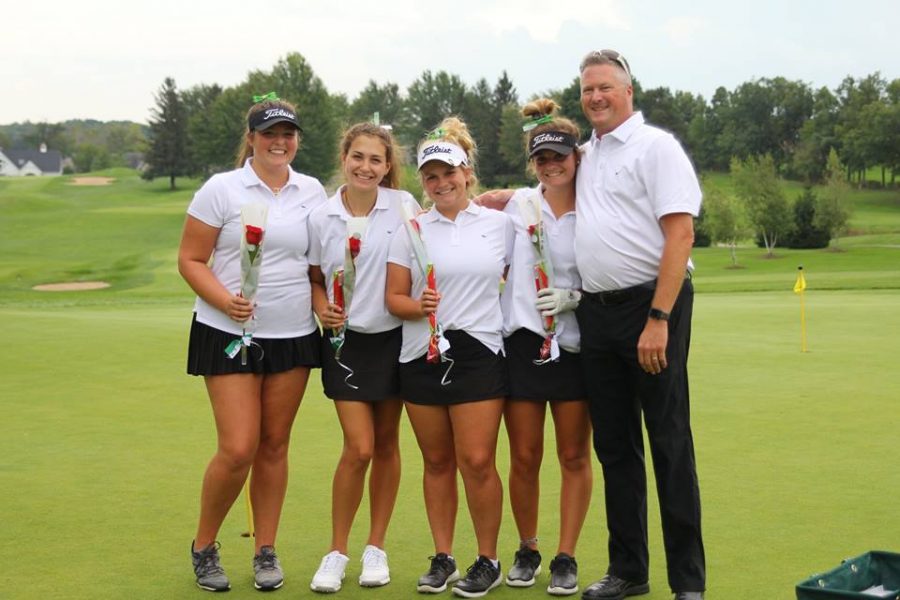 For seniors Haley Hamill, Meg Meekhoff, Kayley Reynolds, and Kacie Rispler, last night marked the last time they would play a home jamboree for the FHC golf program. The Rangers placed second with a team score of 186.

“Our seniors are the backbone of the program every year,” said Head coach Paul Ten Eyck about the leadership his seniors display. “It’s so hard to replace them; they become part of our family and we don’t want to see them go, so it’s really a bittersweet night.”

The 2018 golf team represents a unique relationship between a group of girls who compete as individuals but are an extremely close unit.

The golfers faced a tough, technique-heavy course at Watermark Country Club, and many felt they didn’t perform to the best of their ability.

“Today was a rough day to play,” Ten Eyck said. “This course is so hard and the scores are a little higher than maybe we would have hoped they would be, but this course has the ability to do that to you.”

Despite the challenge, FHC’s golfers were able to shoot some impressive scores. Juniors Ally Ringler and Mandy Ehrlich shot a 40 and 46, respectively. Kayley also had a quality night, shooting a 44.

The golf team has consistently placed second in nearly every outing, which is where the Rangers expected to fall at the beginning of the season. While FHC is securing low scores, they would like to perform at a higher level and reach full potential.

“It was a typical round for us, we struggled [with some things],” Ten Eyck said. “Right now we’re kind of scuffling down the stretch, but I think we still have the ability to make it to the State Finals, which is ultimately our goal.”

The team looks ahead to the Belding jamboree next which will be held at Candlestone Golf Course on Monday, September 24. While last night didn’t produce the best scores of the year, the Rangers felt closer to one another after the Senior Night festivities.

“I love our team,” Kayley said. “We’re all so close and it’s something really special.”