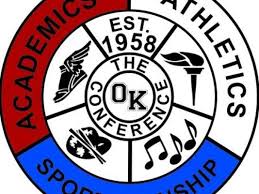 Conference Realignment Shakes Up the OK White for Fall 2016

There will be some new faces, and new teams, on Central athletic fields next fall. With the OK Conference approving a realignment plan this fall, Central will have a revamped OK White Conference, which has eliminated a few rivalries, while reviving a few classic ones.

The most talked-about addition to the conference is neighborhood rival Forest Hills Northern, whom Central will play in football for the first time in four years. Other teams entering the conference include Ottawa Hills, Northview, Cedar Springs, and Greenville. Lowell is the only returning school.

In the past fifteen years, conference realignment has become more prominent and frequent, a reality that Athletic Director Clark Udell has learned to accept.

“I would say that in the past fifteen years, it has become much more frequent,” said Udell, who voted on the proposal this fall. “With so many teams entering and leaving the conference, there have been a lot of changes.”

Consolidation of schools and the abolishment of the Grand Rapids City League has caused rapid and drastic changes in the OK conference recently, with Central leaving the OK Black in 2012.

“When we were in the black, the travel was the main issue,” said Udell. “You end up playing a lot of Muskegon area schools like Holland and Mona Shores, which is inconvenient.”

The proposal was passed and the conference will take effect starting next fall, but what does it really mean for Central teams?

For one, Central is now the school with the highest enrollment in the conference, which is a major change from the old conference, which included larger schools like Jenison and Caledonia. The most noticeable sport that the new conference will affect is football, because Central will no longer be competing in what was arguably the toughest football conference in the state. The departure of Grand Rapids Christian, East Grand Rapids, and Caledonia, all of whom are traditional football powers, will allow Central to have a serious shot at competing for conference titles year in and year out in football.

“I think a major difference will be with football,” said Udell. “The OK White has been one of the toughest conferences in the state the past few years. The conference could have three or four teams each year that could win a state title, so the removal of schools like East Grand Rapids will be a change.”

With Central set to face off against Northern on the gridiron next fall, football coach Tim Rogers thinks that it will be a positive for the community.

“This is long overdue,” said Rogers. “I have never understood why we were not playing them, especially when we already play Northern in other sports. The rivalry will be intense but I am confident our communities will show their class and playing one another will be a great thing.”

Rogers also believes that the OK Conference did a good job in realigning conferences; a process that is undoubtedly difficult.

“Creating conferences is an imperfect science,” said Rogers. “I think the realignment committee did an excellent job restructuring the OK Conferences.  Losing the EGR game is disappointing but overall, I am very happy with our new conference.”

For other sports, the changes will have a generally unknown effect until action officially begins. Across the board, the schools are smaller, which could lead to increased success for Central athletics, but the results have yet to be seen.

The addition of these new schools will eliminate traditional rivalries with East Grand Rapids, and when asked what his ideal conference would be, Udell said that rivalries would play a part.

“If I had complete control, I think the conference would include all three Forest Hills schools,” said Udell. “Having all three would create some exciting atmospheres, even on Tuesday nights. I think East Grand Rapids would make sense, as well as Lowell. Northview probably would make sense as well.”

While that conference would certainly be interesting and allow for exciting match ups, the OK Conference takes multiple factors into account when proposing realignment.

“When the OK Conference discusses realignment, they take geography, enrollment, and number of programs into account,” said Udell. “I think the new conference makes sense, and they did as good of a job as they could have.”

Change is certainly in the air for Central athletics, and the new conference will spark new rivalries and revive old ones; that is, until 2019, when conferences will realign again.

“It is a process that is going to happen no matter what,” said Udell. “With the growth of the OK Conference, it is kind of necessary. With a 50-team conference, changes are going to happen.”