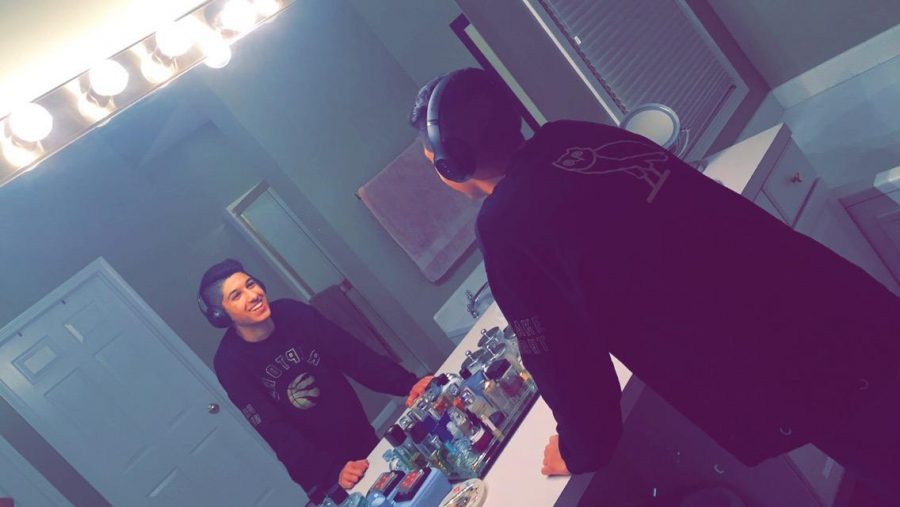 If you were to add @eruja35 on Snapchat, you would not see that many of his stories involve staying up late to finish homework, comical videos of his friends and family, or an artsy picture of the sunset using one of Snapchat’s fluorescent filters.  The stories shared on this particular user’s account are different than another FHC student’s because they display pictures and videos of the user sharing his favorite music, as well as his own.

Junior Eruj Abidi began creating his own music when he was in middle school when he lived in Troy, Michigan for a few different reasons, some being because it was the best way to show the world his talent and also to vent and get his emotions out.

“Music inspires because everyday I go through trials and tribulations,” said Eruj.  “It’s what I do on a daily basis.  I do it whenever I have free time because it helps me get away from the world.”

In school, Eruj often has his headphones in.  He explains that the reasoning is because it’s his way to relieve stress, as it helps to separates him from reality.

“I like to disconnect from the world with my music because all you can hear is your music.  You’re not in touch with anything else,” said Eruj.  “Everything is shut down except for your music.”

Eruj likes to listen to all types of music ranging from R&B, to hip-hop, to pop.

When Eruj creates his own music, he begins by using a software called Logic Pro.  He records his voice using a Bottle Rocket Stage One microphone.  From Logic Pro, he imports the recording into MP3.  Now, he can upload it onto YouTube and SoundCloud.

On the internet and in his creation of music, Eruj goes by his stage name, “Jrue.”  This is to help him separate himself from his ordinary teenage boy life to a rising star online and grab the attention of others interested in his product.

Eruj described his uncle Ahmar Zaidi as his biggest mentor growing up as a kid interested in music.  Zaidi has been a big part of Eruj growing up because of the similar interests they share.

“My relationship with Eruj is one of a friend or brother more than uncle and nephew,” said Zaidi.  “[However], I always tried to lead by example.”

Zaidi continues to describe Eruj as very competitive, similar to how he was as a child.

“The thing that sets Eruj apart from anyone else is his constant drive to win,” said Zaidi. “He cannot and will not lose at whatever he is doing.”

When Eruj was much younger, he would play video games.  If he did not win the game, Eruj would throw a fit.  Similar to Eruj’s personality now, he always wants to be at the top of game.

As far as Eruj’s music career, Zaidi has pushed Eruj to improve continuously.  He recalls Eruj always being interested in music, even when he was younger.  There have been moments when Eruj would be “sway” back and forth if he liked a tune as a younger child.

“I always wanted to make sure that Eruj got exposed to the greats.  Whether it was hip-hop, rock or Pakistani music, I always wanted him to have exposure,” said Zaidi.  “I exposed him to the fundamentals of modern music and I think that really pushed him in the right direction.”

Last year, Eruj had the opportunity to meet the very famous Ariana Grande, who is also one of his musical role models.  He won a raffle to travel to Oklahoma City to watch her perform in concert and go backstage.

“Meeting Ariana Grande was a big part of my music career because I told her that I made music and I asked her what I should do to get far like she did,” said Eruj.  “She told me to continue to my dream, do whatever I want to do, and keep trying.”

While backstage, Eruj also had the opportunity to meet the artist opening for her that particular night, Cashmere Cat.  He is very well known for his creation of beats.

“[Cashmere Cat] asked me to show him my music,” said Eruj.  “He said he liked it, so he hooked me up with some of his producers that are up and coming.  [Also], he told me to get in touch with him and his managers and we’ve been [talking] ever since.”

Junior and friend of Eruj Noah Saleh was pleasantly surprised when he heard about Eruj’s work and passion to get into the music industry. He wishes only the best for “Jrue” and hopes to see him accomplish his goal of being successful.

“If he sticks to his passion and doesn’t quit, I’m sure he can make it very far,” said Noah. “I expect him to get more popular as he progresses with his love music.  It’s all uphill from here.”

Noah continued to explain that Eruj’s popularity on the internet will help him grab the attention of others.

“He is already quite publicized considering the following he’s received on Twitter, YouTube, and Soundcloud, so I can definitely picture him as getting bigger and more popular,” said Noah.  “If he can do or create something that stands out, he’ll be a step ahead of the game.”

Eruj writes his music when he can in his free time.  He likes to write songs based on what he is feeling despite whether it is negative or positive.

“I usually write before I go to bed,” said Eruj.  “Sometimes, I’ll catch myself writing until three or four in the morning.  Time goes by so quickly because I’m just so in touch with my music.”

However, Eruj said writing will sometimes not come naturally to him and he will get writer’s block.  But on days he is inspired, writing lyrics comes effortlessly and “clicks.”

Eruj discovered some of his best friends through music, such as Mustafa Syed from Ann Arbor, Michigan. Syed helps Eruj out by creating beats for Eruj to sing and rap by as well as produce him.

“Eruj has as strong passion for making music,” said Syed.  “Since we were really little, he would be rapping random lines and even though he wasn’t very good at it, it was definitely a start.”

Syed continues to explain that he hopes that Eruj will follow his heart and pursue his dream of becoming a professional music artist.

“Over the years, he gotten better and better. I can definitely see his music taking off in the future and we’re both excited about that,” Syed said.

As of right now, Eruj’s goal is to continue to creating music because it’s his passion and what he believes is his calling.  There is no certainty of how successful “Jrue” will be in years to come, but Eruj explains that it is the passion that counts at the end of the day.

“Whatever happens to me in the future, will be the best for me,” said Eruj.  “As time rolls around, I will have a better understanding of what I was meant to do.”