Postcards From the U.P. 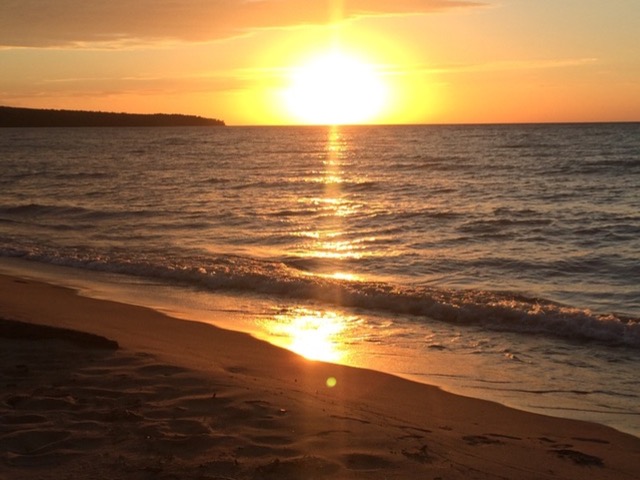 Mid-July of 2015, my youth group from Ada Congregational Church and I took the chance of exploring the other side of Michigan.  Many of us have spent days in the U.P., but it was a first for me.  I’ve heard stories of the crystal lakeshores, patterned rocks, and the beauty of the unexplored territory, but I have never had the opportunity to experience it first hand.  When we crossed the Mackinac Bridge, the vibe changed. The cell service disappeared, the vegetation changed, and cities slowly drifted into woods.

These are my experiences…

As soon as we left Grand Rapids, I knew that our first adventure was going to be truly special.  We finally hit Tahquamenon Falls State Park at approximately 2 p.m.  The second we parked, everyone was out our their seatbelts, grabbing their bags and GoPros, throwing on their water shoes, and rushing into the cool air. We took a little walk on a wooded path for about ¼ mile.  Beside the water, we picked a safe spot to keep our belongings and walked some more.  After scrambling around to find a spot to take our first step in, I was a little nervous.  The rocks hidden in the water were sharp and slippery and not to mention, the water was above knee height and rushing quickly.  It took quite a few yards to get the hang of balancing myself as well as walking comfortably in water shoes.  After taking a few moments to step cautiously, I had an opportunity to look up.  In front of me were what seemed like hundreds of waterfalls in various sizes.  Some were long and steep and others were short and shallow.  Walking on the rocks was like walking on water.  The way the water flowed over the pastel, brown rocks while glistening in the sun was so satisfying.  When I walked under one of the bigger of the many falls, I could hold my arms under the water and feel the cool, clear water run through your fingers knowing that this was nature’s force pushing the water down onto another of level rocks.  The sound of the loud, rushing water echoing under the waterfall was unforgettable.  This moment of me at peace with nature was just one of the many gifts God gave me on this trip.

The same day we explored Tahquamenon Falls, we drove to Munising, Michigan, which sits only a few miles from Pictured Rocks National Lakeshore.  We stayed at campground called Wandering Wheels.  It was a small, but it was enough for us to set up camp and enjoy one another’s company across fire pits.  That night, we shared a meal of hotdogs and hamburgers and shared stories while munching on s’mores.  We went to bed at 9:30 p.m., which was very early for a group of teenagers, because we had a big hiking trip planned the next day.  The next morning, we were woken up early by our youth group leader.  He told us to pack our backpacks with lots of water, change of clothes, snacks, and a swimsuit.   I was very excited to wear my new pair of hiking shoes because I knew that I was going to get a lot of use out of them.  After stretches and pep-talks, we were off.  The first few miles of our hike was exhausting.  It seemed like it took hours to get through the dense woods.  There was nothing but the little, windy trails that lead the shoreline.  I cannot say how many miles of woods we walked through because I honestly do not know.  However, the first glimpse of blue was breathtaking.  We had the opportunity to stop on the first “pictured rocks” we saw and eat a snack of trail mix and dried fruit.  The further we walked along the shoreline, the more I was amazed.  Thinking about it, I can’t string words together to describe how beautiful the view.  The sun had a way of hitting the rocks so perfectly so we could see the stains of reds, oranges, and greens that the water left behind on the rocks.  At one point, the water turned a crystal, aqua-green color.  I have never seen anything like it.  You could see how large the rocks were below the water’s surface as well as big fish swimming freely.  This particular hike was one of the best experience I have ever had and not just because of the views.  On this trip, I had the opportunity to take a silent walk.  On this walk, I left all of my grief, negative feelings, and disappointment about 7 miles into the hike.  I taught myself a lesson about finding positivity and letting go of grudges of things.  I made academic goals as well as goals for myself to improve on as a person.  Through winding trails above the tip of the lakeshore, I got first-hand experience of one of world’s most beautiful places.

Our time in Marquette was a bit of pit-stop on our way further west.  On this day, the weather was called to thunderstorm.  Right before we prepared to cross the water to Little Presque Isle for cliff jumping, we stopped on the shore for a lunch of peanut butter sandwiches and held conversations with friends while sitting in our portable hammocks.  Although nobody wanted to admit it, we were nervous to cross the many yards of water to get this small island.  At this point, it was thundering, the water was about waist high,  the temperatures of the Lake Superior were dropping, and this part of U.P. was covered in dark, grey clouds with high winds as we crossed.  The goal of crossing the water at this point in the day was just to make it to the land of the island.  When everyone was gathered together, we took a small hike to the other side of the island.  On this side, the wind was much more died down and we weren’t getting any rain.  I, being the absolute wimp that I am, decided to not jump the forty foot cliff jump into freezing with the chance of potentially hitting myself on the rocks.  Watching my friends do it was scary enough.  Instead, I took the opportunity to snuggle with our guide’s dog as she was very nervous about losing her owner to the cliffs in this particular weather because she was crying every time he jumped into the water.  Although I didn’t have the nerve to join my risk-taking friends, it was enough of an experience to have an impact on our trip.

Late that night, we hit Porcupine Mountains Wilderness State Park.  Our campsite was an open field that was directly across Lake Superior where we had the most perfect view of the sunset that night while taking baths in biodegradable soap.  Sleeping in the tents at this campsite was definitely not the most soothing.  It was very windy and once again, the weather called for rain.  I recall waking up at 3:11 a.m. and listening to the wind and rain pound against the tent at a very rapid pace.  I was beginning to miss my bed when this was going, but I had to remind myself that this was the reason I came on this trip.  I wanted new experiences because I wanted to try something that was out of my comfort zone.  I remembered that when I was little, my grandma taught me a prayer to help me fall back asleep.  A few minutes later, I was back to resting.  The next morning, we were woken up early again.  That day, because it was chillier that morning, I wore quick-drying athletic shorts, a t-shirt, and a hoodie.  The first little while of the hike was entirely uphill. I mean, we are in the Porcupine Mountains.  Our legs were tired as we were beginning to warm up.  A few miles in, we were standing at the highest point in Michigan.  Overlooking miles of trees under gray skies perhaps could have been one of the most simply stunning things.  This hike was lots of up and down.  It was important to go very slowly when descending.  We went through woods, hiked along rivers, and travelled through marsh.  At our lunch break, we had an opportunity to eat along side of unoccupied wooden cabins.  One of the more humourous moments of our trips was a group of us fighting over the last applesauce pouch because we were running out of food for our hike.  After many more miles of hiking, we got a glimpse of Lake of the Clouds.  To describe it best, it’s a lake that sits at high elevation.  When the weather is just right, it looks like clouds are touching the water of the lake.  A few people from group decided to stay behind for more hiking, but when we returned to the campsite, we found one of our tents displaced with its steaks out of the ground and supplies in the woods due to wind.  The temperature has risen tremendously since the morning, but after we took our baths, the clouds began to rise again and it became sweatshirt weather.  Our final night in Porcupine Mountains was not a disappointment despite the weather.  It was filled with stories of friends and prayer.

We spent our final full day in the U.P. with a very special adventure in store.  This day, we were going white-water rafting.  I was very excited because I have never been.  We had a reservation for a trip at NorthWoods Adventures, right outside of Wisconsin.  It was a sunny, warm day in this part of Michigan.  NorthWoods Adventures has a really cool vibe to it.  The interior of it’s main building is filled with pictures of people who have been white-water rafting in the past, videos from GoPros of people in the river, as well as action shots of guides and their experience with extreme water sports.  When I first walked in, I met people that were radiating with positivity and were excited to lead us on an unforgetable adventure.  We were led to changing rooms where we had to chance to switch into appropriate water gear such as swimsuits and water shoes.  Then, we were fitted into helmets and given basic safety instructions.  On the bus to Menominee River, which borders Michigan and Wisconsin, we met our personal guides that would be rafting with us.  When we got into rafts, the water was flat for about a half hour.  This gave us the opportunity to play games while the guide got the chance to get to know us.  We stopped offshore for a few minutes to overlook the gorge that we were about ride through.  We all agreed it looked exciting, so we hopped back into the rafts and headed toward it.  It was a very thrilling experience.  Rushing through the water was a team effort because we had to work together to paddle quickly.  As we were going through the gorges, it felt like we were floating.  Some of us were even jolted out of their seat, but luckily nobody fell into the river.  This experience taught me to take chance.  We only have the opportunity to live one time in this world once, so why not do something crazy?
Overall, my U.P. trip was amazing.  I got away from the “real world” of studying for A.P. classes beginning the next summer, text messages and phone calls, and constantly being occupied by social media.  This was an opportunity for me to disconnect from not only cell service, but from all of the distractions at home.  I not only discovered a new part of world, but a piece of myself.