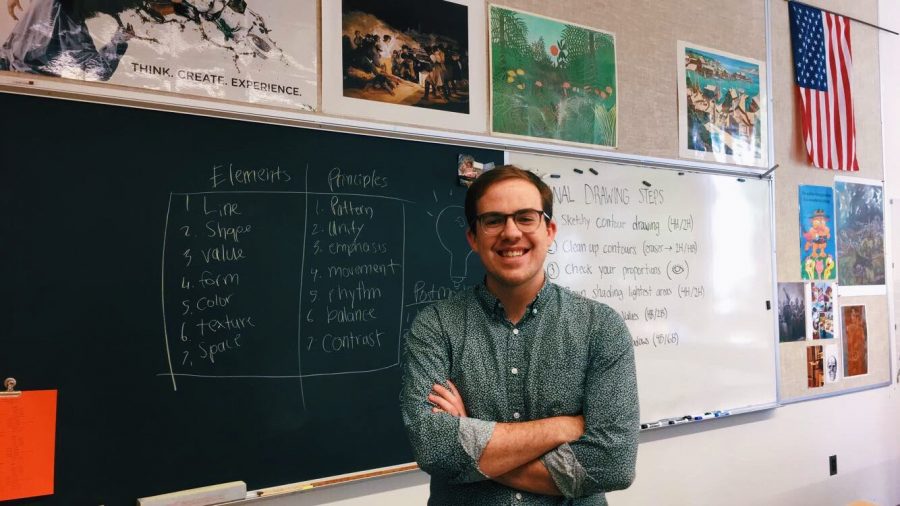 Former art teacher Neven Allan’s retirement left a wake in her place, but luckily for the school and for art students, new art teacher Tyler Fewell rode a wave swiftly into the unfilled position. Although prepped for the job because of his previous one at George Westinghouse College Prep. in Chicago, taking over seven art classes in five hours, while also having to follow the shadow of Allan, proved to be an arduous task.

Countless hours went into personalizing the three art rooms that were once filled with Allan’s memories that were created over the 30 years she spent working here, as demonstrated in her signature senior photos that line the walls of the Art Department. Fewell’s goal in redecorating the art room was not to wash her memory off the wall but rather to make it his own place and to create an area where he would be free to teach without feeling as if he was treading on Allan’s memories.

“In terms of prepping,” Fewell said, “[I did] a lot of work in the physical space of what is essentially an entire department that I have to myself here. I worked for probably a couple of weeks before school started so I could get familiar with the space. Obviously, Ms. Allan did a fantastic job while she was here; but she had been here for 30 years, and the physical signs of that kind of showed. What better indicator than decades of senior photos, right?”

Allan was known for her expansive knowledge of the arts, which was one of the struggles when finding someone to take over after she retired. Despite Allan’s multi-level skills, Fewell was able to seamlessly pick up her classes due to the extensive classes he took himself as a grad student such as drawing, illustration, painting, and printmaking.

Before moving, Fewell used to work on the west side of Chicago. There, he taught one class for two hours: Graphic Design and the AP version. He taught his class along three other teachers for a school that is essentially the same size as FHC. Fewell had a position that included working solely with computers and reporting to another leadership figure, which is in stark contrast to the job he would be taking at FHC.

In his new position, Fewell teaches seven different classes in a five-hour time period single-handedly. Instead of looking at this as a dreadful challenge, Fewell gracefully stepped in to make the change as easy as possible. Fewell avidly worked to familiarize himself with the classes and the course plans.

While Drawing and Painting, Intro to Art, and AP classes proved to be without issue, Fewell had to deepen his knowledge of sculpture, crafts, and photography to be able to teach his students. Fewell views the learning process he had to undergo as more than just extra work but as an opportunity to expand his knowledge and for students to see the hard work and on-the-spot thinking that real life often requires.

“It’s an enormous amount of prep,” Fewell said. “It’s a lot to handle in terms of the curriculum; I have to be on top of my stuff. My students sometimes make fun of me because I will write notes to myself on my hand all the time. In addition to all of that, I’m also new to the school.”

Although Fewell has taken on so many new classes, he will largely be maintaining the original structure of them and a majority of the same aspects that they were previously taught in.

On the other hand, Fewell has also made some changes to classes such as Sculpture and Clay to incorporate new skills. One such way is integrating working with alternative clay to give the students more experience with different medians and to give students a chance to experience all aspects of the class and its true potential.

“A lot of time students come in thinking that clay is the only option for them, and that’s all that they’re going to do,” Fewell said. “So, [I’m] trying to get them in the mindset of working with sculpture as being a genre of artmaking that is separate from a median, separate from the thing that they are using to make artwork; [that] is important to me.”

Other classes such as Crafts and Photography have been merged into one. This way, Fewell is able to wander from class to class and not have them be totally separate. With the way Fewell set up the curriculum, he is able to teach his students a majority of the same things at the same time. This is not only beneficial for Fewell himself, but also for his students because he allows them to wander in between classes as well.

“I think a lot of [students] were a little hesitant,” Fewell said, “especially the ones that signed up for photos and instead are in craft and vice versa. Instead of them doing the same thing simultaneously, we’re talking about similar ideas, and they are still having a similar kind of conversation that keeps them connected. So [I’m] figuring out how to keep those things detached, even if they kind of meander a little bit, instead of being totally separate. And those students are even crisscrossing.”

Fewell believes that letting a student cross from class to class allows them to experience all aspects of art. While some student may be complaining about the work in the Craft classroom, they are able to walk over to the Photography class and see that they were the ones who had it easier in the first place. Fewell believes that students are able to find appreciation for all of the work that goes into artmaking, and people are less likely to view art as just a blow off class, but one where a student can truly challenge themselves.

While some changes have been made, Fewell originally had a background in drawing and painting, meaning that these classes were some of the easiest to pick up and some of the most interesting to him. Despite his move and added classes, he maintains his love for graphic design, keeping the memory of his first job with him. Fewell was originally self-taught in graphic design but continued on to pursue professions in the area. He loves the unique capabilities for creativity to shine through when using a computer. With his love for computers in mind, he hopes to get more students working on them in areas such as Photoshop.

Since the move from Chicago, Fewell has found the rewards of his choice to pursue teaching in a whole new light. Although Fewell acknowledges the hardships that come with the transition and taking over an entirely new space, he finds rewards in seeing students faces light up in understanding or the moment they believe that they can do anything they put their mind to.

One of Fewell’s highlights of teaching at FHC is the community. He loves how close-knit the district is and how personal each class he teaches is. Additionally, with the size of Grand Rapids, he is able to be more involved in the community, unlike in Chicago where the city is incredibly large.

“Being able to go to football games, going on senior retreats, Homecoming preparation, and go to the grocery store and see students [is amazing],” Fewell said. “Coming here and being able to interact and also be a part of the community on a smaller scale is something that I’m really into. It feels like it ties in what’s important to me about being a teacher, outside of what is the formal job.”

All of these aspects of loving the job and loving the community add to the atmosphere and energy that Fewell brings to the classroom. He has been able to create a relaxing place where students feel safe to express themselves and are able to let their creativity fly without fear of being judged. These are the aspects that freshman Sammie Rouvillois specifically enjoys.

“There’s always calming music playing in the background while Mr. Fewell walks around the room helping people out,” Sammie said. “I like that it is a place where you can take a break from the school day and relax.”

Sammie, a student with limited prior knowledge of art, is a perfect example of one of Fewell’s favorite parts of being a teacher. With students in Art Survey, having limited to no prior art experience provides opportunities to broaden their horizons and experience arts they never saw themselves pursuing, much less succeeding in.

“Being able to see students flip when they are successful at something,” Fewell said, “especially when they previously thought that kind of success was unobtainable for them, is always a highlight. Hopefully, that happens at least once a day, but you can’t always hope for it. But when it does happen, that’s a day-maker right there.”

Although these experiences often happen in his lower-level art classes, they happen just as often for students who have been involved with the arts for years. A perfect example of a student like this would be senior Logan Schenk. Logan has been taking art every year since 7th grade and took three different art classes last year including Ceramics, Crafts, and Drawing and Painting 2. Currently, Logan is taking both Crafts 2 and AP Studio Art.

With all of Logan’s prior experience, in both art and having many different art teachers, she has had a lot of exposure to the different types of teaching.

“[Fewell is] organized and much less ‘traditional,’” Logan said, “not to say he’s not a good artist because he is. Allan seemed focused on wanting us to lean towards the more realistic side of art while Mr. Fewell seems to recognize that everyone has their own style.”

Fewell’s personality and free-flow style of teaching are truly captured in regards to his love for Bob Ross. While students and teenagers alike have developed a love for the fun-loving artistic guy, Fewell has a different appreciation for him. The idea that captivates Fewell is the nonchalance that Ross has when it comes to art. When a student encounters failure in art, Fewell likes the idea of it not being the end of the world but rather a chance to learn.

“I do actually really like that he’s popularized the phrase of ‘happy little accidents,’ Fewell said. “I think people, especially at FHC, are so tough on themselves. It’s a very high-pressure environment for academic success. In art, I think there’s a certain kind of perseverance that is a very learned practice for people and is obviously very helpful in the world, but it’s something that could benefit a lot of them outside of art as well.”

Fewell perspective is that encountering failures in both art and school can prove to be lifelong lessons that are easier learned young. Unplanned art and making mistakes teach students to persevere through their failures, not worry so much about how the failure affects them, and use that as motivation to continue. Because of this unique outlook on school, teaching, and art, Fewell will be a teacher to watch in the upcoming years as he assists his current art students toward very bright futures, with art and also in their everyday lives.

“Sometimes you just have to look at a physical manifestation of your failure and be okay with it, learn how to move on from that, and grow in it,” Fewell said. “I think getting comfortable with experimentation and having accidents is a beautiful mindset that’s helpful for them in the art room and also helpful in real life.”