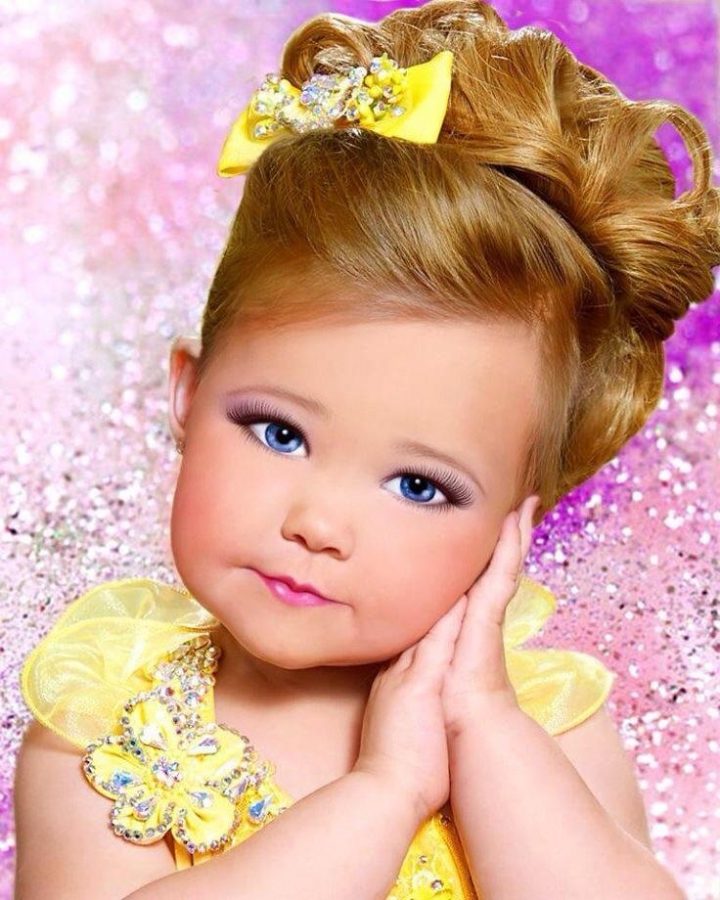 Play-doh resembles a young child. Both dynamic and vibrant with their loud oranges and vivid reds; yet, so fragile in the sense that when you stretch it too far, it tends to break, as the once whole string of play doh has collapsed under the weight of the pressure. A child is vulnerable in the sense that their mind is essentially like play doh, so easy to manipulate and so easy to shape. However, just like the play doh, the child seems to snap when stretched to a certain extent, and such is true as they are parading around in skimpy bikinis and blowing kisses, all for nothing more than a sparkly crown and the title of “Miss Sunshine.”

When we portray to children that the perfect smile and the perfect tan are all you need to ultimately win beauty pageants, we are teaching our little girls the value of one’s beauty trumps the value of one’s intellect. We are no longer teaching our toddlers how to be future leaders of America, but instead we are teaching them that outer appearance determines their worth. In this generation, parents are ultimately pitting their children against each other in a full-fledged war, with the motto being “may the prettiest win.” By instilling in our children that the most beautiful girl will take home the Grand Supreme title, we are setting them up for a future where they come to believe success and positive attention will only come if they are “pretty enough.” At its core, beauty pageants are portraying to young girls that the best thing they can do it to view themselves as nothing more than as assemblage of body parts- flaunting across the stage in an attempt to convince the judges that they are more beautiful than the next little girl in line.

Beauty pageants focus on flaws, and our society builds on that. The elaborate costumes, the ten pounds of makeup, and the entire “primping” process teaches young and impressionable girls that in order to be considered pretty, you have to meet the ideal standards. You have to be a certain weight, have perfectly flossed and straight teeth, and ultimately look like a real-life barbie doll. Pageants, like magazines, set unrealistic ideals and most young girls spend much of their life trying to measure up to society’s impractical standards. Rather than raising strong, independent girls who want nothing more than to be successful, these competitions provide a platform on which little girls are dressed up as barbie dolls and paraded around in an attempt to attain some warped form of perfection that shouldn’t even exist in little girls.

Being a mere three years old, a toddler simply isn’t old enough to decide if they want to devote the rest of their childhood to gowns and crowns. The toddler isn’t old enough to have a voice, and most parents take advantage of them and end up ultimately forcing them into it. If children aren’t old enough to say “No,” they certainly aren’t old enough to be wearing self-tanner and 5-inch heels. I would also like to point out that a little girl screaming, begging her mother not to “hurt her” as she held down in a chair for a plucking and brow-waxing session simply goes past the point of being insensitive on the mother’s part-it is, to a certain extent, downright abusive. I find it hard to see a difference in repeatedly ripping your child’s hair out in the name of beauty and repeatedly spanking your child in the name of authority.

Anything good that one may argue a pageant does for a child, something else can do ten times better. There’s basketball, golf, volleyball – an array of different sports and activities that build strong, confident women without degrading them and treating them as nothing more than materialized barbie dolls. In a childhood that is engulfed in an amalgam of opportunities for spelling bees and tennis tournaments, why can’t our generation learn to tuck away the fake teeth and self tanner?