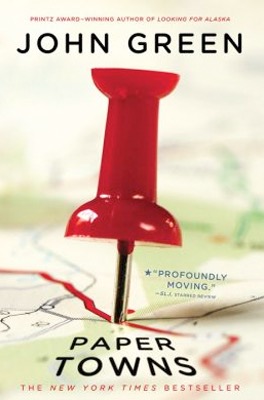 Quentin “Q” Jacobsen, a high school senior who is just about to graduate, has spent his life pining for his next door neighbor and childhood friend, Margo Roth Spiegelman. Margo, who grew apart from Quentin as they grew up, is a headstrong, reckless girl who wants nothing more than to get out of their small town in Florida. After years of being disconnected, Margo suddenly crawls in through Q’s window and back into his life for a whirlwind night of pranks, break-ins, and revenge. Their friendship, which was nothing but cold ashes, appears to have been rekindled. So when he heads to school the following day, Q expects things to be different between him and the love of his life. But Margo, who has always been adventurous, has disappeared, it seems, off the face of the earth. Her secret admirer is understandably distraught. However, it isn’t long before Q discovers all of the clues she left behind-and knows that they’re meant for him.

Paper Towns by John Green is the kind of novel that proved to be a necessity on my overflowing bookshelf. One of his other books, The Fault in Our Stars, left me heartbroken and longing for more of his sarcastic, gripping, and passionate writing. There are multiple differences between The Fault in Our Stars and Paper Towns besides the story, such as the kind of humor. Paper Towns gave me the perfect dose of sarcasm, if not a little bit more than what I would’ve expected. Instead of two teen cancer patients, like what TFIOS gave me, here was a normal high school setting with normal high school kids. The humor was easier to laugh at, easier to relate to, and more easily understood.

Besides that, another thing that drew me to this novel was the storyline. Just by reading the summary on the back cover told me that I was in for an exciting adventure. From page one, I was hooked into Q’s story, turning page after page as he fell in love, fell out of his childhood friendship with Margo, and then was roped back into her life for a brief second of a revenge filled all-nighter. His dedication to finding the love of his life after she disappears was heartwarming, and his willingness to do anything and everything to help her is sugary and sweet.

And yet perhaps it was a bit too sweet. There were times towards the middle and end of the book that I was questioning whether or not Q’s love of Margo was even healthy. If you think about it, he barely even knew her anymore. And yet he was the one chasing after her clues and driving all over the country. While that is an extreme level of dedication, sometimes throughout the book it appeared to be almost borderline creepy obsession.

Despite those flaws, this was a novel that I thoroughly enjoyed. Filled with memorable quotes, such as “If you don’t imagine, nothing ever happens at all”, and “I’m in love with cities I’ve never been to and people I’ve never met,” this book is definitely up there next to my other favorites. Filled to the brim with romance, sarcasm, and adventurous experiences, Paper Towns proves that “You have to get lost before you can find yourself.”