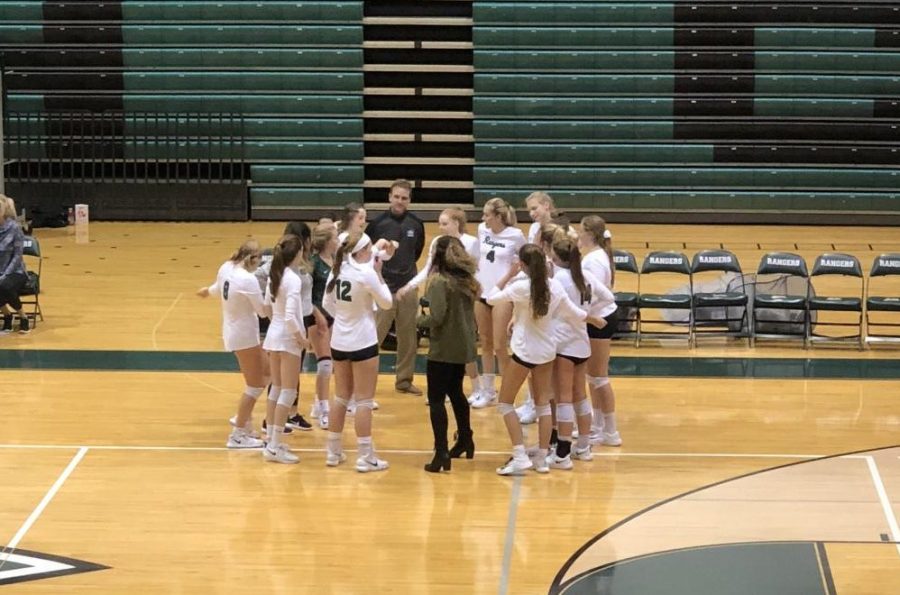 In the final match of the first half of the varsity volleyball conference games, the Rangers defeated the Greenville Yellow Jackets 3-1. The team stands even in the conference at 3-3, but Head coach Dayle Wood says that since they are starting to mesh so well together, the Rangers can only go up from here.

Freshman Sophia Shields earned the first point of the game off of a kill, but Greenville quickly fired back and earned a 4-1 lead. After this, the Rangers trailed the rest of the set. However, they were able to tie it twice at 23-23 and 24-24 before being defeated 26-24.

Both teams fought it out in set two with thirteen ties and six lead changes. Early in the set, the Rangers were able to down two; multiple hitting errors from Greenville and kills from seniors Caileigh Treash and Katrina Bodkins put energy back into the Rangers and they were able to make a comeback to gain the lead 6-4.

“I think the momentum was part of the girls getting the first game jitters out of the way,” Wood said. “[After we got over this] we finally started playing our game.”

The teams traded points for the rest of the game until Katrina and sophomore Hannah Bergman earned 2 kills and 2 aces, respectively. With this, they closed out the set 25-21 to tie the match 1-1.

The energy from the Rangers continued into the third match and with it, they gained a substantial 11-4 lead after 2 aces from junior Lauren Schofield. However, Greenville was not willing to go down easily and got back in the game to close the gap to 20-18. Wood then took a timeout to talk to her team. Sophia got another kill coming out of the timeout, but Greenville’s momentum was still there and they got the score even closer at 21-20. Wood once again took a timeout. After this Katrina got a block that went to the ground at the speed of light and crushed Greenville’s spirits. The Rangers took the third set 25-20.

Similar to set two, set four was back and forth at the beginning. The Rangers eventually had a 7 point run that put them up 19-12. Greenville gained a few more points before senior Kate Ryan closed it out with a tip to the back corner to end it 25-18.

The team faces rival Forest Hills Northern this Thursday at home. They are 1-1 with Northern thus far; they lost to them in the first conference match of the season but defeated them at the Rockford Power League tournament.

“We know we are capable to beat them once more,” said Wood when asked about the upcoming game. “But, certainly Northern is going to come with their games faces on and we need to match that. It’ll come down to serves, consistency, and volleyball IQ.”