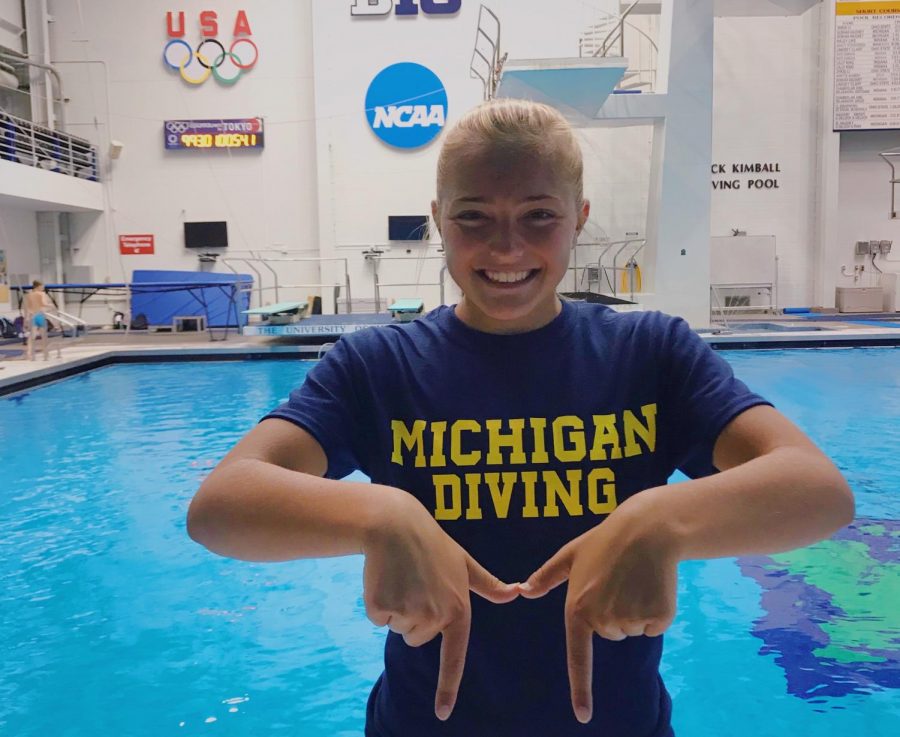 To fully understand senior Anna Hansen’s life as a diver, it’s necessary to start from the middle of her journey: the present.

On Sept 4, Anna left home to dive in Indiana, leaving all the comforts of home behind. In Indiana, she’ll be attending a rigorous, elite diving program while also taking online classes with Michigan Virtual to better prepare herself for her future. While the transition is an extremely difficult one to make, especially for a seventeen-year-old, she is ready for the change of pace, embracing it with an open heart.

“It’s hard [to be moving away my senior year], but it’s more exciting than hard,” Anna said. “I’m most excited to pursue my own thing and do what I love. Also, with Indiana, I’m excited to dive all of the time because I love it. I’m always nervous that I’ll get sick of it, but I know I never will.”

For Anna, the sport is more than simply a hobby or an extra-curricular: it’s something completely embedded in her life, and she would not be where she is today without it. Diving is something she is incredibly passionate about, as can be attested by her sister, sophomore Emma Hansen.

“She really clearly has a big love for it,” Emma said. “She always goes to the longest practices and puts her all into it. Diving is her whole life, and even if she goes through a rough patch with it or is down on herself, she stays tough and sticks with it. She has a lot of perseverance and is really strong-minded to get through the tough times and continue doing what she loves.”

The program will be far from easy, but essentially, every moment will be worth it. According to Anna, there are still many dives she hopes to be able to complete, and this program will be a huge step closer to getting where she needs to be.

Training in Indiana is a life-changing opportunity for Anna, and taking advantage of all the programs has to offer will be key to being successful in the coming years. It will be highly intensive training, both in the water and on land, in addition to world-class coaching. Anna’s teammate and roommate, Molly Hampton, think that the coaching staff will help both of them progress as divers over the course of the year.

“Our coach [John Wingfield] has coached nine Olympians and probably knows more about diving than anyone,” Molly said. “We also train far more than any other team; we train seven hours a day, six days a week.”

The high intensity is exactly what Anna needs, as she thrives most when faced with a challenge. By surrounding herself with better divers than herself, she inevitably gained momentum in tackling increasingly more difficult dives.

“I’ve definitely been a lot more confident in my diving recently,” Anna said. “Last year was kind of a hard year for me just because it was a bit of a slap in the face. I think it was just very humbling to just know that you’re not the best person in the room with diving and stuff like that. With harder age groups and stuff, you just have to learn how to balance it out and progress from there.”

Anna got a taste of what a school year in Indiana would be like this summer when she did Ripfest Diving Camp, the 12-week version of the current program she’s doing and one of the world’s most premiere diving camps. The opportunity to dive for Ripfest Diving Club was too good for her to pass on, especially with such an excellent staff and team to work with.

Molly will be right by Anna’s side throughout this program and knows that no matter what, Anna will give the sport her all.

“Anna is an extremely hard worker,” Molly said. “She doesn’t mind change and is willing to try anything. She is motivated and is willing to go the extra mile to make a correction in her diving. She is very good at springboard, and I think her ability to balance school and diving is admirable.”

All of her raw mental and physical ability is what has made Anna unique as a diver. Her potential for greatness is what has made her stick out to many coaches in the past and present, including University of Michigan’s diving coach.

“[A major turning point in my diving career] was committing to University of Michigan because I wasn’t confident in my diving, and I knew I wasn’t quite as good as everyone else,” Anna said. “All of that made me really nervous to apply for college. But when I met the Michigan coach and he was interested in me, it boosted my confidence a bit. It made me a lot happier with myself, and my perspective on diving definitely changed as well. It got me thinking that like, ‘Oh shoot, if he wants me, then I must have some sort of potential.’”

Very quickly, University of Michigan’s diving coach was impressed and intrigued by Anna, contacting her attending some of their practices and seeing how she fit with the team. She was a perfect fit for the team, making all of her dreams come true.

“[I was] overwhelmed,” Anna said. “When I was told that I had a spot on the team, I cried, and I just was so excited. My dream school, my dream diving coach, and my dream diving team. Everything just came true, and it was the weirdest thing ever but also such a cool experience. Having the words ‘you can dive on my team’ come out of someone’s mouth [felt amazing].”

Anna wasn’t the only one who was thrilled about her taking the next step in her diving career. Her sister was over the moon about Anna’s achievements, of which the University of Michigan is her greatest one so far.

“I was so excited,” Emma said. “I didn’t know for sure if she was going to get to go, but I knew the coach was really interested in her and liked her a lot. I kind of had a good feeling about it. When I found out, I was so excited. She hasn’t ever imagined herself going to a different school other than [University of] Michigan, so when she got in, I knew she would just be so excited, which made me happy.”

Over many years, Anna has grown an incredible amount since she first started diving. Watching her journey progress has made Emma and the rest of her family proud of all that she has accomplished.

“I was super young when Anna started out, and I didn’t know a lot about it,” Emma said, “But I feel like now I know everything about it. It’s just been cool seeing her go from doing a front dive at a meet to doing all these flips and cool dives that people in the Olympics do.

From front dives to Olympic-level dives, Anna has grown exponentially over the course of her career, and her love for it has only increased the more she dives. It all started when she was diving for fun in third grade, advancing from there to Grand Rapids Diving Club; and the rest is history.

“I used to really like diving off the diving board at Cascade Hills Country Club, like flipping and such,” Anna said. “That was pretty fun. Basically, since the beginning, [I’ve loved it]. Now, I’m going on my ninth year of diving but only my seventh year of competitive diving.”

Eight-year-old Anna could have never seen what was in store for her future or that all of her wildest dreams would culminate in her senior year of high school or that she would achieve all she ever dreamed of.

“I really just think she loves the sport,” Emma said. “I think she has so much passion and love for it that she just does it and won’t ever stop. It’s her favorite thing ever. She loves diving.”