#RealityHigh is a painfully cheesy flop 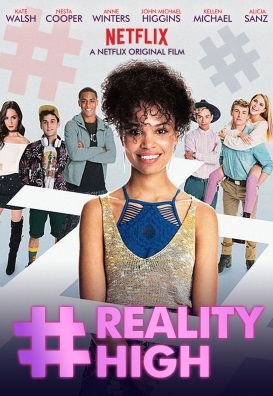 I’m surprising myself by even admitting to watching a movie with a hashtag in the title.

But, to be fair, I think we all have high standards for Netflix originals. So I was willing to give Netflix teen drama, #RealityHigh, a chance.

#RealityHigh follows the story of ambitious high school outcast Dani (Nesta Cooper). She has high hopes for after high school and thus does her best to ignore the malicious antics of the airheaded mean girls. Queen bee, and now bigtime social media influencer, Alexa (Alicia Sanz) has always had it out for Dani, yet Dani can’t help but fall for Alexa’s ex-boyfriend and top jock of the school, Cameron (Keith Powers). So, of course, drawn-out drama and forced “hilarity” ensues.

I really did have some faith in this movie and Netflix, but it positively flopped. It oozed with every bit of cheese you’d expect– plot, characters, insertion of weird, attempt-at-relevant references, and more. It felt like a sloppy combo of every Disney Channel Original Movie and Mean Girls but without the nostalgia or actual comedy. For example, there was a running joke throughout the movie of a delinquent student making obnoxious, crude jokes, and it genuinely made me cringe.

Dani follows a painfully predictable character arc, but I have to applaud Cooper’s performance. I think her character was pretty hollow, giving her little to work with, but her talent still shone through. I believe she was restricted by such a poor film and certainly has a lot of potential.

On another positive note, I was at least happy with the representation of the characters– both with race and sexual orientation. There was variation in these things, but none of those qualities were exploited in the form of harmful stereotypes. Rather, they were simply accepted as perfectly normal.

Furthermore, if you try really, really hard to grasp some meaning from all the teen drama minutiae, I think that #RealityHigh does provide a bit of a commentary on the harmful effects of social media on today’s adolescence. However, even in that respect, the movie is a bit exaggerated and overdramatized.

All things considered, I still regret spending 99 minutes of my life on this movie. It was far too much cringe and cheese to handle, even for my standards. I will fully admit that I am a sucker for a stupid chick-flick or rom-com, but #RealityHigh might not even be decent enough to count as a guilty pleasure. If you’re really, really desperate for a mindless guilty pleasure, you’re probably better off just rewatching The Kissing Booth.