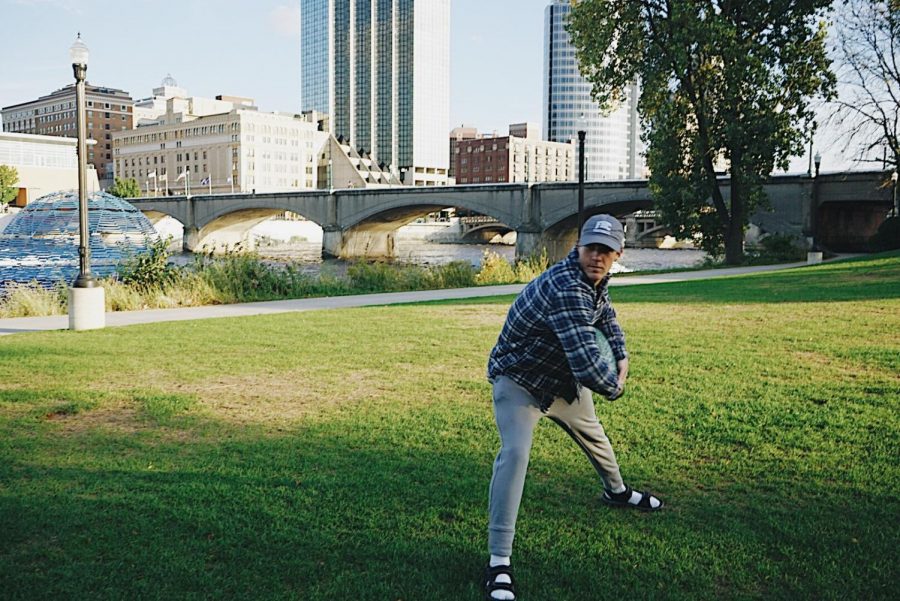 Airplanes bring some level of uncertainty to most. Being suspended 45,000 feet in the air in a 175,000-pound aircraft, with your life in the hands of two pilots, has a certain fear factor to it.

While some see the unpredictability of airplanes as scary, senior Chris Sobieck always saw plane rides as an enjoyable experience rather than something to be scared of.

Not only was his love for planes a factor in pursuing piloting, but his grandpa’s stories about his own experiences in the Air Force only amplified Chris’s aspirations.

Chris always looked up to his grandpa, for he usually had an answer to every question Chris asked and talked about different planes at the bases he was stationed at. Those stories, along with his original fondness of planes, fueled his determination to join the Air Force.

“Throughout my life, I’ve always looked up to my grandpa,” Chris said. “He always seemed to have an answer for any question I had. I saw him a lot as a kid, even though he lives in Ohio, and he told me a lot of stories. He would always talk about the different kinds of planes at the base and how the pilots communicate with each other and are able to do incredible things while under pressure. I don’t know why, but that always made me look up to them and want to do the same thing.”

His long-term goal is to join the Air Force ROTC (Reserve Officers’ Training Corps), a program that trains college students into future officers in the armed forces. For Chris, the rigorous program will prepare him for eventually becoming a fighter pilot. In order to reach that final step, though, Chris has to physically train and take classes through ROTC along with his other college classes.

Not all colleges have an ROTC program, though, so Chris has been researching any schools both in state and out that offer the program. The Air Force requires their applicants to choose a major before starting the program. With the classes that Chris has been taking throughout high school, he will be pursuing either aeronautical engineering, aerospace engineering, or computer science.

Eventually, Chris will graduate from college as a second lieutenant in the Air Force, where he will then pursue two years of training to graduate from that position and start piloting.

“You have to take a standardized test, kind of like the ACT, and the score you get determines what you can do,” Chris said. “For a pilot, you have to get a certain score. So if you can do that, you start training, [and] from there you just start flying. I would like to do probably fighter planes if I’m able to, [but] I guess it really depends on where you get put. I could get stationed in Japan or Iraq, or just wherever conflict is going on.”

While Air Force members can voice their preferences about where they would like to be stationed, sometimes they are stationed at a base where a certain specialty is needed. For Chris, he could be stationed any place where fighter pilots are lacking. But, his location preferences will be taken into consideration.

His top location is Alaska for more reasons than just its picturesque scenery.

“I think it would be really cool to be stationed in Alaska because then, I don’t know, you probably wouldn’t die,” Chris said, with a laugh. “My goal is to not die in the Air Force, [but] I don’t think pilots really die that often. If you’re a navy pilot then you’re in an aircraft carrier, and you’re overseas, and usually for the Air Force it’s not that intense.”

At some points in his life, Chris briefly considered joining the Navy, but the Air Force ended up being his final decision around his sophomore year of high school. Any position in the armed forces is scary for loving, supportive parents like Chris has, but the possibility of getting seriously injured in the Air Force is less likely than in the Army or Navy.

While Chris knows his parents will be supportive in whatever he does in the future, he realizes there always will be a layer of nerves hidden under the excitement and guidance.

“My family is both nervous and excited,” Chris said. “They want me to succeed and do what I want for a living, but at the same time, they don’t want me to be in danger and not be able to visit me whenever they want to. They’d rather have me in [the] Air Force than the Marines, Navy, or Army.”

The possibility of dying may seem like a deterrent, but it’s extremely unlikely for a pilot, and Chris doesn’t see any reason not to pursue a job that allows every day to be something new. It all ties back to airplanes: the uncertainty of the ride doesn’t deter Chris, much like the uncertainty every day will bring doesn’t steer him away from the unique opportunities the Air Force will bring.

“I don’t want to have a desk job,” Chris said. “[I want] anything where I can actively [be] doing things. The structure and intensity of [being a fighter pilot] will make every day different and exciting, while at the same time give me a solid direction to go in. It will keep me in good shape and hopefully help me live a better life.”

Chris will definitely fulfill his need for constant activity and change as a fighter pilot. While every day can mean something completely different, there will always be a level of intensity to piloting.

Fighter pilots perform incredibly intense maneuvers, and that is where the years of physical training are put to the test. They experience extreme amounts of g-forces, which occur when they accelerate and experience a force that acts in the opposite direction. To test if fighter pilots can withstand such force, they are put in a simulator that spins them around, reaching up to 8 G’s.

Humans can typically handle 5 G’s without passing out, but fighter pilots can build up a tolerance to 9 G’s.

Chris has not yet experienced the intense forces, but he has been in fighter pilot simulators to get a feel for piloting. Some nerves ensued over the logistics of flying, but Chris is excited to get in an actual plane in the near future to really see what it’s like.

“I think just flying in the air would be fine,” Chris said, “but taking off and landing… I don’t know, I think that would be a little nerve-wracking. I really want to get into it.”

Chris is looking forward to someday leaving the classroom and making planes his new normal. What started as a simple fondness for riding in planes has taken off into a future career where he gets to spend every day in a place that is home.

“I love the freedom and the ability to just see the world around you from such a different and unique perspective,” Chris said. “Every time I go on a plane and look out the window, it always makes me feel at home.”