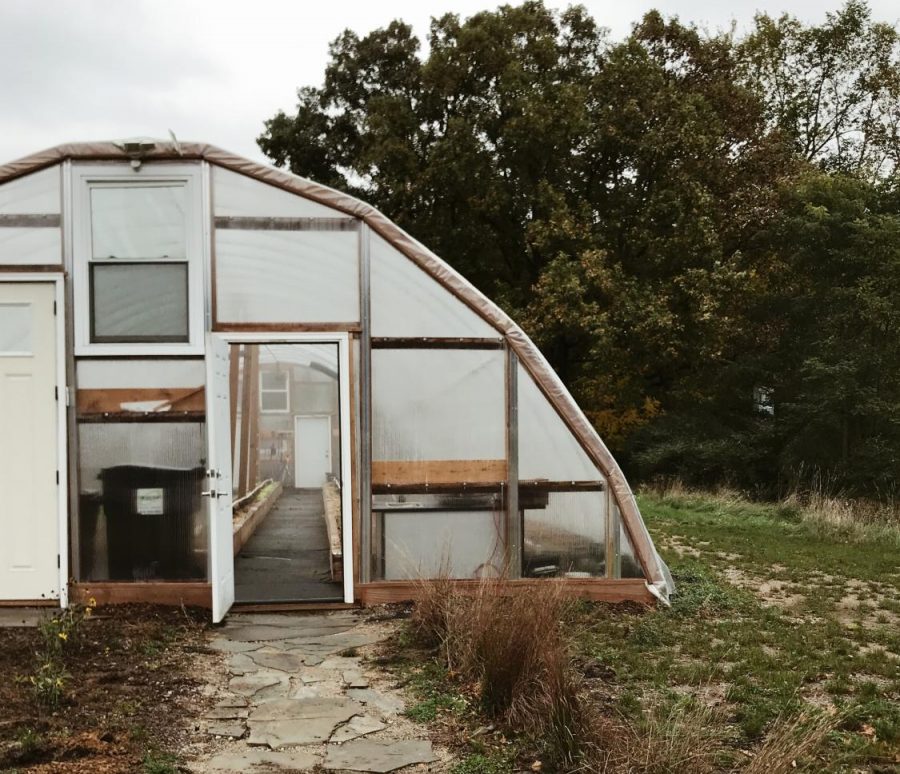 With this new week came new tasks and new subjects of interest. Rather than fulfilling the usual chore of seeding, transplanting, and watering on repeat, my week was filled with supplementary tasks of creative and engineering nature, which was a welcome change.

The first row of the greenhouse, which is my row, consists of only snap peas, and uniquely from other plants in the greenhouse, snap peas need a little bit more care to be healthy and more effort to fulfill their potential. The previous week, we installed several trellises, which, in effect, are there to give structure to the long vines of snap pea plants. This week, we started from there and tied string to both the trellis and the plant to ensure that the snap pea plants would begin growing vertically, rather than horizontally, increasing the productivity of each individual plant. The only trick to it was being gentle with the plants to make sure that the young plants wouldn’t be crushed by too tight of a knot or by the firm grip of our hands.

Another engineering-type task we looked into this week was doing making a sign for the greenhouse out of a thick, fallen tree. Unfortunately, there wasn’t a ton be done with that project because of limited time and resources; but branching off the idea of “decorating” the greenhouse, we began landscaping the front area of the greenhouse. The other hours transplanted decorative tall grasses for one side of the path, and I dug holes for the other side and transplanted Black-eyed Susans, a pretty yellow flower. As the year goes on, it’ll be interesting to learn more about different techniques in that area, the ways to conserve water, and ways to cater to the natural landscape.

The only time I planted this week was on earlier on when I planted a new flat of spinach, which is a low commodity in the greenhouse. Also similarly to past weeks, I also completed the watering of the flats in the ceramics room, an enjoyable activity as always.

I love being able to have a class that isn’t based in a classroom but is based in the greenhouse. I learn so much more about planting, growing, and taking care of plants because I am actually doing the work rather than being told how to do something. I think that the hands-on approach to learning is a lot better than the ways I am taught in other classes. I also really am enjoying being able to somewhat pick out what we are growing and where it is grown, with the help of Mr. Scholten, of course.

On Monday, we all had to replant our flats that were growing in Mr. Scholten’s room because only a few of the many seeds planted had actually sprouted. We aren’t exactly sure why so few of the seeds grew, but we are thinking that the light intensity was too high for the plants to handle, leading us to believe that the natural light in the art room will help them grow quicker and stronger. On Monday, we also got to plant another flat of kale which is already starting to grow. On Tuesday, since the snap peas are getting so tall we spent our time connecting them to the trellises that Olivia and Mr. Scholten made. We tied string close to the tops of the plants to hold them up which also helps them grow more sturdy.

Later in the week, we started a new project on the outside of the greenhouse since most of our planting is done inside for now. Our project is to make the pathway and front of the greenhouse look nicer and more welcoming. A few weeks ago we moved some flowers and planted them around the path, but the soil was too dry and the air outside too warm which lead to the plants dying. This time around, we are moving some oriental grasses to go on the right side of the path. On Wednesday, it was raining pretty hard outside but that didn’t stop the fifth-hour girls. We dug holes and planted grasses despite getting pretty wet. This time we made sure to dig deeper and get more of the roots in hopes that they will stay alive this time. On Thursday, we finished up transferring the oriental grasses, and although, it doesn’t look perfect, it’s getting there. We also dug holes for more flowers to be planted on the left side of the path.

Over the week, I’ve been reading more of the book, The Nature Principle. This week I read about how, “The more high-tech we become, the more nature we need.” I also read that “there’s no denying the benefits of the Internet. But electronic immersion, without a force to balance, creates the hole in the boat — draining our ability to pay attention, to think clearly, to be productive and creative. The best anecdote to negative electronic information immersion will be an increase in the amount of natural information we receive.” This really interests me because I feel like the more I use my computer, the less I am going outside. In school, for example, we rarely used devices a couple years back; but in recent years, I have had to spend countless hours during and after school on my computer. I am very excited to learn more about what we can do to create a greater balance between nature and the internet.

During the week, Mr. Scholten and I mainly do manual labor because it is his free hour. This week we had the task of trying to get rid of the mice. The previous week we knew we had a mouse and caught it over the weekend, thinking it was the only one. However, we came back and found that there’s another one now eating the lettuce. We have set traps all over, and hopefully this week, we will finally be mouse-free. We also finally have all of our boxes planted. We were just waiting to fill in the last few empty spots that were from the mice or the plants that didn’t make it.

This week in the greenhouse has been filled with lots of hard work. We began a new landscaping project and have been playing around with the design. We are planning on building a big arch near the greenhouse out of some beautiful logs. There’s going to be a carved sign at the top along with recognition for donors. Along the sides of the path, we are planning to have rows filled with perennial flowers and ornamental grasses. We spent Wednesday and Thursday digging up holes along the path and filling them with ornamental grasses we transferred over from the mini marsh near the greenhouse.

The rest of the week was filled with more independent reading and working with the plants. On Monday, we went to check the new flats we planted last week, and many of them shriveled and died over the weekend. The light may have been too intense near the middle of the flat because only the little sprouts along the edges survived. We went through the flats and re-planted in the sections that didn’t survive, and I filled a flat with basil. Hopefully, by the end of this week, it will begin to sprout again. On Tuesday, we worked more in the greenhouse. The snap pea plants that were planted a few weeks ago are beginning to get really long, so we tied the plants up to a wooden plank that runs horizontally above row A. Eventually the snap peas will grow up and around the wood, and I can’t wait until we can harvest them.

At the beginning of the week, Maria, Kara and I spent time replanting flats. We had several cells with seeds that didn’t germinate, so we had to go back and try planting again. I planted more cilantro seeds and saw a few of them beginning to sprout near the end of the week. In addition to our individual flats, we planted a flat of kale as a group. Although small, there were sprouts of kale by the end of the week as well. Planting new flats is important for us while we are still in the early stage of planting. If any of the plants in the greenhouse die, we use those grown in the flats to replace them.

Despite the rainy weather, a lot was accomplished outside during 5th hour this week. We’ve started a landscaping project to improve the presentation of the land in front of the greenhouse. Mr. Scholten provided us with a diagram of the layout but also gave us the freedom to be creative in organizing where to put what. On the side of the greenhouse, there is an area with several varieties of wildflowers and grasses, which will be our source of landscaping plants for this project. On the right side of the path was very hard and rocky, so digging was not an easy task. Once we had enough spaces, we used a gardening fork and shovel to dig up each individual grass plant and transplant it to our holes. You would be surprised at how heavy the plants were with all the roots and compact dirt attached. It was raining pretty heavily, but we made the best of it and had fun doing our job. We continued this project on Thursday, and by the end of the hour, we had an entire row of ornamental grass planted on one side of the path, almost a row of Black-eyed Susans on the other, and enough holes to bring another row of plants.

On Friday, we were unable to tend to the greenhouse. During a construction project, a water pipe was punctured and the area around the greenhouse experienced flooding. However, the unfortunate situation gave us time to read our books and reflect on our week. I finished my read through “Tasting and Touring Michigan’s Homegrown Food” by Jaye Beeler. I shared many of my thoughts about the book last week, and as I wrapped up my read, I continued to be impressed by the passion of the growers and the variety of unique foods in our state. I am also currently reading “The Nature Principle” by Richard Louv, which will be my main reading focus this semester. I am currently beginning part 2 of the book which is entitled “Vitamin N”. This section will be all about the ways nature impacts our physical, emotional, and family fitness. I’m excited to read and reflect on the information offered by the next few chapters because I believe that a strong connection to nature can improve the way you feel and act. 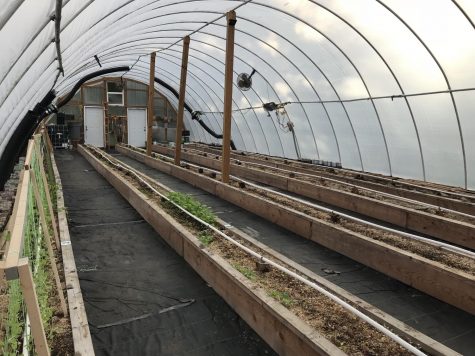 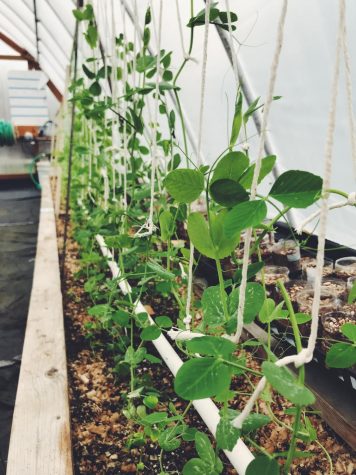 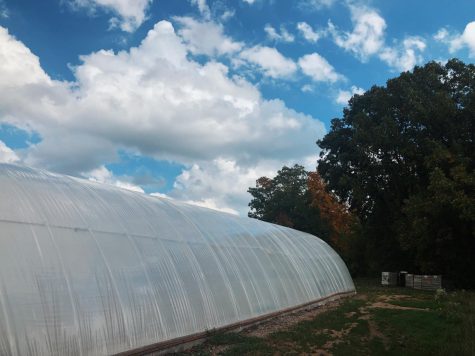