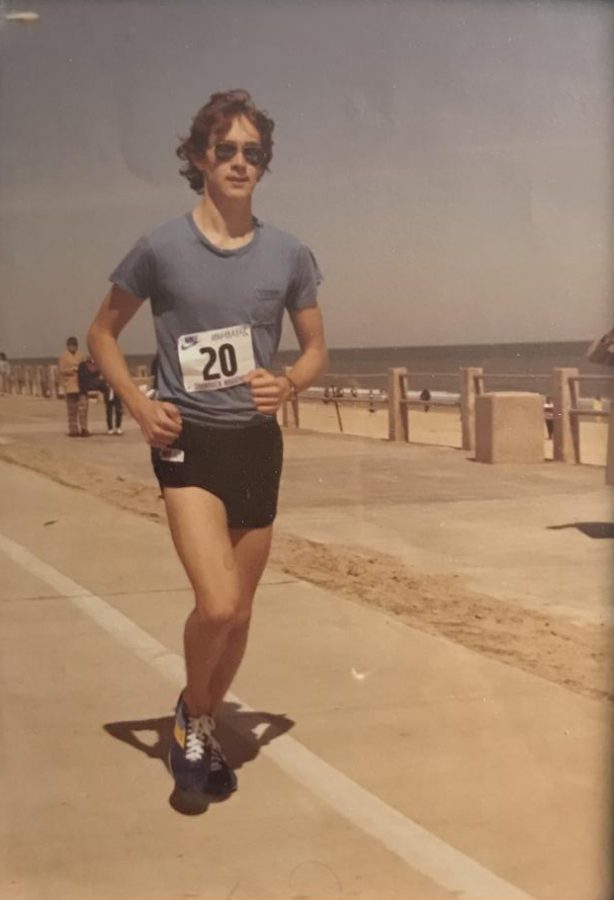 There’s a picture of my dad that hangs in my room.

It’s one of those pictures that completely captures a person’s essence where every detail is of the utmost relevance. Donning his clip-on shades and looking at ease in his classic running attire, the high-school version of my dad is mid-stride at his favorite marathon. The course runs parallel to the coast at Virginia Beach, so a couple passersby passively spectate. Waves lap distantly behind him, and the wind seems to be tousling his chestnut-colored hair. A comfortable smile is pulling at his mouth, and caught in the sepia-toned frame, he holds this look of being so alive, so at ease, and so genuinely happy.

This version of my dad could never imagine the life he would have ahead of him and how running would’ve played a role in his life and in the life of his only daughter.

For my dad, running was an escape and, even more than that, a joy. Rather than living like any high-schooler in the 70s would have, he chose to run, and by the end of high school, he ended up running six marathons simply for the joy of running. As college came around, so did the cross country season, and time soon became a scarce commodity for him, both for running and for school. So he had to make a choice: run for a D1 school or have passing grades at a D1 school. The answer for him was obvious, and running for Duke University’s team became a long-lost effort.

Years passed, and he continued to run and work hard. That is, until his knee injury in 1989 and the surgery that followed a couple years later. For the three years following the knee adjustments, my dad–my strong, competent, able dad–had limited mobility and walked with a cane.

The question remained: would running, or even walking, ever be the same for him? When the doctors’ constant answer to that was a no, he ignored their disbelief, and being the stubborn man I know him to be, he worked hard and recovered just to prove them wrong.

Nowadays, he’s out running every morning and, in his words, “huffing and puffing.” Even on the days when he rolls out of bed and has to fight the morning headaches and the tightened muscles, you can count on the fact that he will be out on his early run.

The fact of the matter is that my dad is incredible. And if there’s anything I know him to be, it’s humble and a helper. He’s humble about himself and a helper to me and anyone around him.

In middle school, I was beginning to not love soccer as much as I once had, and because I had a little bit of a background with running, I joined the track team. I absolutely fell in love with running. Then, I joined the cross country team, and the same thing happened again. Every year after that, I ran for my school, soaking up every moment of glory and happiness, even when the season wasn’t going my way. However, despite all those changing years, changing seasons, and ever-changing results, my dad was my constant.

It didn’t matter if I was the slowest runner or the fastest; he would be there a half hour before the meet, would start to stretch me out, and share some encouraging words. And without a doubt in my mind, I could count on him to always be right around every bend and corner during my race.

He’s been there for almost every race for six years. His passion for running and his love for him converged with my seasons and my running career. The thing about my dad is that when he cares about something, he never gives that something half of him. He doesn’t give our family half his attention; he doesn’t teach his students with half his passion; he doesn’t run with half his motivation.

What my dad loves, he loves extraordinarily and he loves fully.