Boys Varsity soccer squeezes past Rockford 1-0 in District round 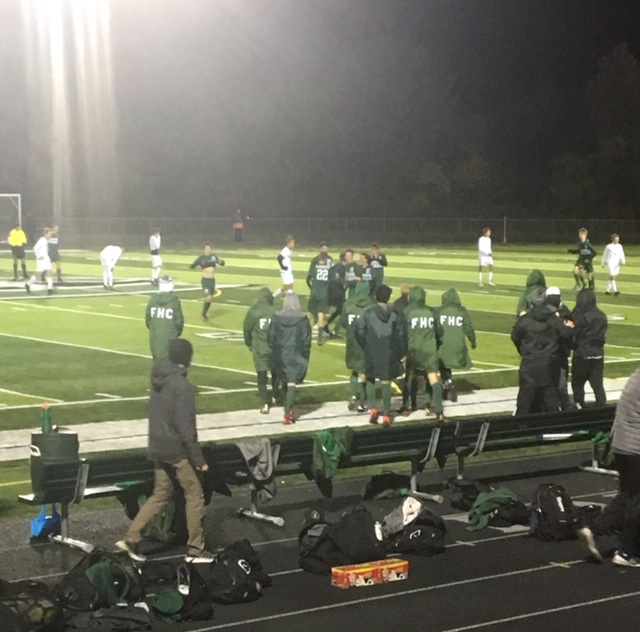 In an energetic game on both sides of the field, the Boys Varsity soccer team managed to pull out a narrow 1-0 victory over the Rockford Rams. The win Monday night moves the Rangers on to their next game against the Caledonia Fighting Scots. Senior Alec Norris, who has been a key offensive contributor all season, came up big by having the only goal of the game.

“We were expecting to defend the whole game so {the goal} put us on top,” Alec said. “It gave us a lot of confidence in the second half and it got the other team’s morale down as well.”

The game started with aggressive offensive pushes from both teams. FHC and Rockford had early opportunities to score, but the defense hung tough for both teams. Senior Geoffrey Batterbee really stood out for the Rangers early on, clearing the ball well and set the tone early.

These pushes lasted for the first 27 minutes of the game, but once the clock hit 13 minutes, Alec found the back of the net to put FHC up on the Rams 1-0. Even though the offense shined in the first half, some of the best Ranger soccer came in the final 6 minutes of that half.

FHC held a mighty Rockford push, where the Rams were relentless on the offensive end. Junior goalie Kyler Williams had one of his best halves of the season, as the defensive effort displayed was one of the main reasons the Rangers defeated Rockford. FHC would continue the great defensive play and it led them to a statement win over the Rams.

“We just tried to put some of the games in the past behind us,” said Kyler. “{Our goal} was to focus on the type of soccer we knew we could play.”

Obviously defeating a very good opponent like Rockford, this is a huge win for FHC. The Rangers are now 1-0 in the postseason and look to carry over some of the confidence from this game into their next postseason game.

Head coach Caleb Postlewait was impressed with the way his team responded to 2 straight losses.

“The boys responded to a mini-slump that we were in,” Postlewait said. “We’ve been training hard all season, we knew we had great potential with this squad and the boys just came out hungry for a win. I think the team that deserved to win did so tonight”

FHC now travels south to Caledonia to take on one of the most talented teams they have faced this season. The Fighting Scots finished with an overall 12-7-2 record and a 9-2-2 league record. Caledonia is also coming off a win against Everett 3-1.

For Coach Postlewait and FHC, the game plan remains the same.

“If we come out with the same type of intensity it should be a good contest,” said Postlewait. “Caledonia is a very talented team and they’re coached well. So if we stay true to our style and our system, I think we can run with anybody.”