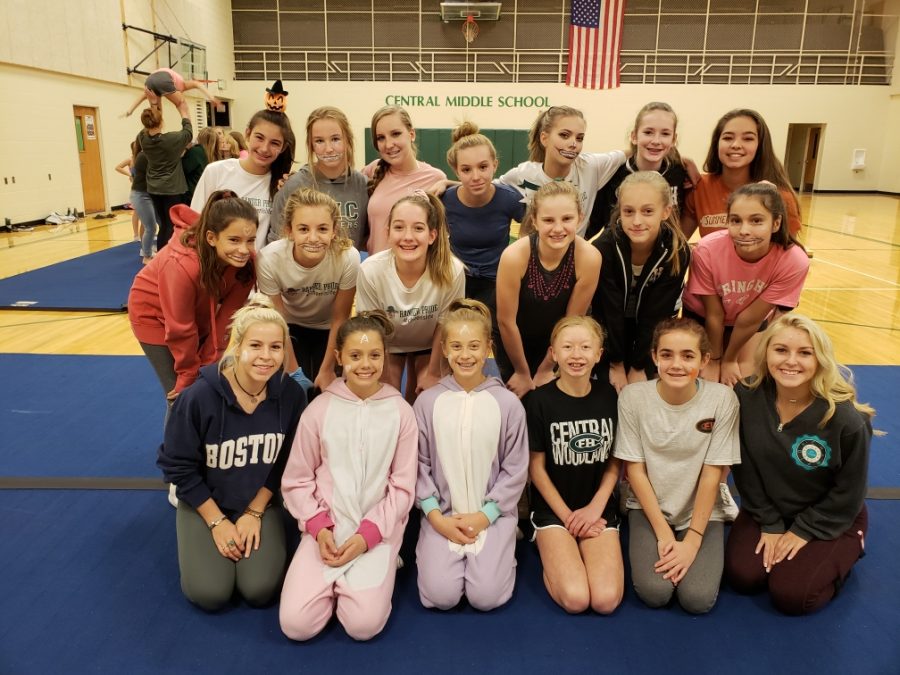 As a tackle takes place in the football game behind the line of young cheerleaders, they turn around and begin to chant what they were taught by their veteran coach, senior Sophie Young. One girl, who is particularly flexible, prepares to tumble– a common cheer term used to describe a form of gymnastics.

“[The girl] did a round-off back-handspring back tuck,” Sophie recalled about her time coaching seventh and eighth graders this year. “She was doing that at a game, and her shoe flung off, and it literally went up into the stands. It was like, ‘Bye.’ She landed with one shoe on and one shoe off, and everyone was like, ‘What just happened?’ All of the girls who were in line chanting stopped.”

This moment surprised the coaches and elicited an eruption of laughter and shock from the cheer team of seventh and eighth-grade cheerleaders. Even after weekly practices and games, mishaps occur, and the varsity cheer team cheerleaders are put in the position to handle it while coaching the youth cheer program.

Starting at third grade, the youth cheer program groups grades into teams of third and fourth graders, fifth and sixth graders, and the final team of seventh and eighth graders. Each team is taught by a handful of coaches ranging from sophomores to seniors. These high school coaches are in charge of everything that has to do with cheer. From stretching to stunting, they become the adult that is in charge of dozens of energetic kids who are eager to learn.

For many of the coaches, they’ve been through this program as it is an introduction to cheer for young kids. This creates a feeling that rivals deja-vu.

“I had these coaches who were [like] me,” said Sophie, who began cheer in fifth grade. “I’m now in their position, and it’s kind of a weird moment when you’re switching positions like that, but it definitely teaches you to grow up a little bit more. Not in a harsh way, but in like, ‘Wow, these girls are looking up to me because I’m a varsity cheerleader,’ and they want to be that someday.”

Junior Kate Willemin often has a similar feeling while coaching. Whenever she hands out instructions, she can’t help but think back to when she was the one receiving them.

“All the time, I think about [being the coach],” said Kate, who helps coach the fifth and sixth-grade team. “Every time I’m coaching, I’m like, ‘Am I doing this right? Am I portraying what my coaches gave me too?’ ”

Coaching these young kids brings responsibility along with a feeling of remembrance. Tying in their experiences as a kid in this same program to their skill level now makes the varsity cheerleaders excellent coaches for the younger children while exposing the coaches to a new level of authority. This kind of responsibility is hard to find outside of the youth cheer program. For junior Sami Walquist, this amount of control was a new adventure.

“[Coaching]’s a lot different than what I’ve experienced before,” said Sami Walquist, who started cheer in sixth grade, “because I’m usually not put in that position. I’m not [typically] in charge of a lot of students.”

Sami is a coach of the youngest group of cheerleaders along with her co-coach. These two start the very beginning of the youth program, and they introduce cheer to the young third and fourth graders.

With such a young age range comes challenges. As many of the young kids don’t know much about cheer, Sami has to grab their attention and instill knowledge into them using any tactic she can while recognizing their endless effort.

Throughout the season, Sami has used their effort and her constantly improving knowledge of coaching to help them learn. Having an experienced co-coach has allowed her to master the skill with some guidance.

“I kind of let the other coach lead a little bit [in the beginning],” Sami said. “Now that I know what I’m doing, I’m more confident, so I can give them better suggestions on what they’re doing.”

Along with confidence and a whole new set of skills, the coaches become leaders. For first time coaches, the system of multiple coaches helps them ease into it, making it less scary and more informative and fun.

“My co-coaches have both done it before,” Kate said, “so they knew what was happening. They were kind of easing me into everything.”

At each practice, Kate and Sami were able to learn from the others and realize what was best for the kids. Soon, they were able to jump in, take initiative, and implement new techniques.

With the new coaches gaining confidence and seasoned coaches taking the lead, bonds are built, and the young girls look up to the knowledgeable coaches. Persistent directions and tough moments can arise when coaching, but all the negatives fall aside when everything comes together just as planned.

“It’s very hard to teach [young kids],” said Sophie, who has been coaching since sophomore year, “but at the same time, it’s so worth it because [you see] these little children running around who love cheerleading. In the end, seeing them actually produce a cheer, like a stunt, [is worth it].”

These good moments don’t come without difficulties, though. The younger kids often require much more management and supervision as stamina is difficult to develop. Sami faces the brunt of this energy but takes it in stride.

“Sometimes it’s hard to be mean to [the kids],” Sami said, “but if they’re not listening, you have to be [strict]. Even if you have to be a little bit demanding, they still know that you’re trying to do the best for them. I think that I understand that more as a coach now.”

The rowdy and unwieldy energy often decreases with age, but the issue of a packed schedule is something all the coaches deal with no matter the grade.

On a typical day, varsity cheer team practices run after school from 3:45 P.M. to 6:00 P.M. Following that, the coaches rush over to their practices and pack away their homework for after the youth cheer practices or games.

“There [are] more positives, obviously,” Sophie said, “but some of the negatives are that it’s hard to balance school. A lot of times, [senior and co-coach Dora Pomeroy and I], don’t really get home until [around] 8:00. It is hard to balance homework during that time period.”

Demanding schedules rule the coaches’ lives for about the first two months of school, but the benefits are worth it, as Sophie states. Watching their teachings take form is a feeling not many high schoolers get to experience.

“[Their improvement] is amazing,” Kate said. “It’s heartwarming watching them learn and knowing that I was directly a part of that progress.”

Without the sacrifice of time and endless hours of dedication, the coaches would not be able to feel accomplished and enthusiastic over what they’ve done for the young cheerleaders.

And no matter how thin time is stretched, Sophie will never regret coaching. As the season comes to a close, teaching and inspiring these kids will be missed by the coaches.

“It’s only a short time period,” Sophie said, “so it’s worth it because you only have to struggle for [about] two months for these little girls’ happiness. You just have to be a good role model for them, and then after that, after it’s all over, it’s kind of like a weight’s been lifted, but at the same time, you’re sad. You’re like, ‘Shoot, I don’t get to see these little cuties every day.’”

These heartwarming moments are a highlight for many of the coaches. It shows how it all pays off, no matter how many shoes fly off in the middle of a game, how many times directions need to be repeated, or how often coaches have to cram in homework. And the coaches get to watch along with parents in the stands as everything comes together and falls into place.

“I truly love coaching,” Sophie said. “It’s cool to have these kids do a cute little stunt, and then the parent will come up to you and [say], ‘Oh my gosh, that was amazing.’ It makes me feel good because I helped those girls do that. I did that, and they got up there.”