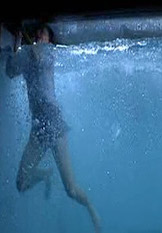 Warning water wades at her ankles. Neither warm nor cold, the temperature leaves her unsettled. Sounds of slight sloshing surround her as the peculiar water inches up with precision that rivals a surgeon.

Last she remembered, she was nowhere near water. Hairs on the back of her neck stick up like a frightened cat at midnight as she comes to a realization: her hands had hit a wall.

In a desperate search, her hands moved in front of her with hunger as if a secret door was hidden somewhere like in the movies. Everything seems unreal. Maybe she was in a movie. That would make sense. Or maybe a dream, right?

Hysterically, her fingers jerk away from the walls, and she pinches herself.

Panic rises up from deep inside of her, crawling out of a cave she longed would never be opened.

Water climbs up her legs with its liquid claws digging into her senses. Everything that once lay in front of her was tantalizingly washing away as trepidation and unease took control. Reality kicked in as the walls appeared to shift closer and closer together.

In a desperate attempt, she wedges her foot into the gelid, forbidding corner as her fingers search for a grip. With everything she has–distress, fear, and uncertainty–her opposite foot launches her body upwards and searches for a landing.

The water unwillingly leaves her body with only the deliberate droplets left. As her body clings to the corner, barely out of the reach of the monster below, her eyes ardently search for another ledge in the unsettling dark; she sees nothing else.

A roar erupts from above, and the water begins to ascend up the walls even faster as if it was chasing her. Her fingers are turning white as she puts all her faith and strength into them to pull her up the wall. Heaving herself up, she hits an invisible barrier. It’s nothing like the one she’s propelling off. It’s not frigid, rough, or even apparent.

But it’s there, and it’s stopping her. She forces herself against it with every muscle she has and every last ounce of effort left, and she bursts through with a hand that grips a slim, sharp ledge. Jagged rock cuts into her fingers as they tighten around the ledge, but she can’t feel it.

Instead, she feels the weight on her left shoulder. A warm presence, in the shape of a large hand, forces all its might onto her loosening her grip. Reluctantly, losing the battle, her fingers slide off. She is in free fall.

As her body flies down, taken by gravity, encouraged by a strange and sudden pressure, her eyes dare the universe one last time and peer up. Her eyesight runs up the walls she was just precariously scaling and past where she once was. At the tip, where the walls bled into darkness, a figure’s face sits watching.

With a squint, because not everyone has 20/20 vision, the details of the giant above sharpen, and it is like the roof was a mirror.

The face was her own.

Echoes of a slam soar up the walls as her body collides with her inevitable fate.