Girls JV golf has strong season overall, looks ahead for a bright future 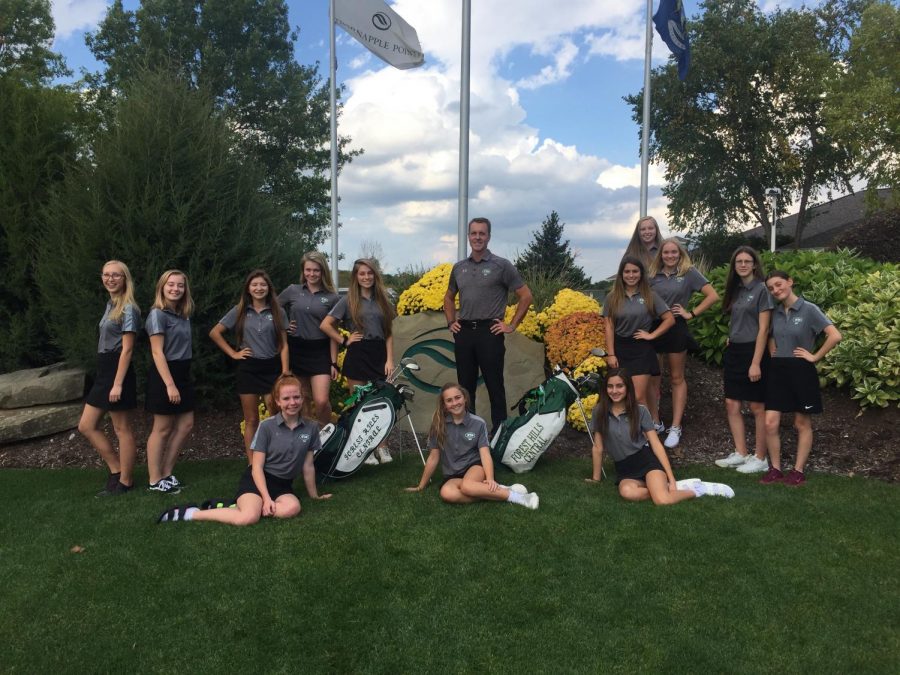 This season the girls JV golf team had a very strong year by showing plenty of improvement over its last season. After losing two of its best players to the varsity team, some concerns were had heading into the season.

“We had a great season,” Head coach Chris Sobieck. “I didn’t know what to expect after losing two of my best players from last year.”

Despite the concerns, the Rangers never finished lower than third place and showed solid improvement with every match they played.

Juniors Katie Bethel and Haisley Turnquist improved their overall scoring averages by nearly 9 shots for nine holes. Sophomore Bela Gonzalez improved by 4 shots per match and junior Lily Nicholas improved by 3. The most-improved on the team was sophomore Anna Freihofer by 11 shots for nine holes. Along with these primary five, freshmen Alyssa Cheslek and Lexi Schnelker also saw extensive playing time and gained plenty of experience in their first season at the high school level.

FHC had the best player in the conference this season with Katie. She had two wins and a second-place finish throughout the season. For Katie, it wasn’t just about her performance; she also took pride in her team as a whole.

“I think we did really well this season,” Katie said. “We were able to finally beat Northern and get first at some of our tournaments, and a lot of the players received first as an individual as well.”

Along with Katie as a top scorer for the team was fellow junior Haisley.

“I think the season went really well,” Haisley said. “There was a handful of us that got to play in every match and that was really nice. We definitely did a lot better than we did last year, and we even beat Northern, which was one of our goals this year because they’re our biggest competitors.”

Improvement was a big goal for this team. The competition around them got better, but FHC got better with it and kept up to finish strong in all their matches.

“I think I improved a lot this season,” Katie said. “My coach made changes to my swings and was always willing to help me, even outside of practice.”

Throughout the course of the entire season, not much changed for the girls standings-wise. The story was always similar; they placed third at the lowest, saw a majority of second-place finishes, and earned a couple strong first-place finishes.

With this season in the books, the JV team looks ahead to the future to see what improvements they can make and who will be next year’s primary players.

Six other freshmen were on this year’s team and will be pieces of the team next year. These six include Bella Wiseley, Bella Beckering, Coco Corey, Kenzie Hushack, and Bella Debano.

“These six players were all relatively new players to the game,” Sobieck said. “They all have really improved throughout the season and I have high expectations for them next year.”

Along with players moving up within the JV team, six players will be leaving this team and moving up to varsity in the 2019 season.

“I’m extremely excited to watch the varsity team next year as they add players from this current team,” Sobieck said. “I think they are going to have a special, potentially historic, year.”

With the 2018 season concluded, the team can look back in pride at strong finishes in every match they played. The Rangers even came out with the win against long-time rival Northern. Many girls will be moving up on the JV team as new leaders and many of these girls will hopefully be seeing spots on next year’s varsity team.

“This season was great,” Haisley said. “We all had a lot of fun and made a lot of memories together at practices, matches, and even car rides. I loved this team and I can’t wait to hopefully play with some of these girls next year.”